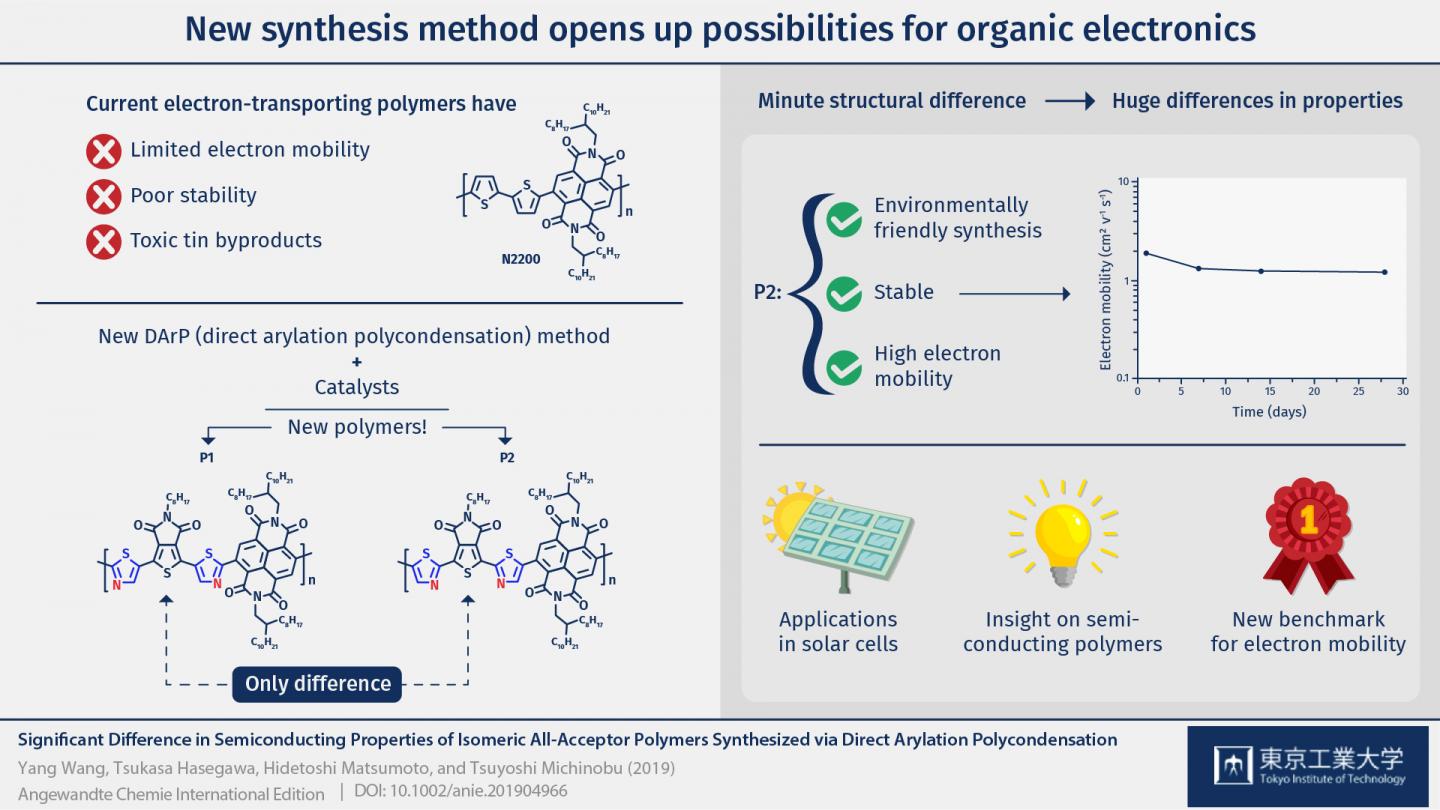 Semiconducting polymers, very large chain-like molecules made from repeating sub-units, are increasingly drawing the attention of researchers because of their potential applications in organic electronic devices. Like most semiconducting materials, semiconducting polymers can be classified as p-type or n-type according to their conducting properties. Although p-type semiconducting polymers have seen dramatic improvements thanks to recent advances, the same cannot be said about their n-type counterparts, whose electron-conducting characteristics (or ‘electron mobility’) are still poor.

Luckily, a research team from Tokyo Institute of Technology led by Prof. Tsuyoshi Michinobu found a way around this. They managed to reliably produce two long n-type semiconducting polymers (referred to as P1 and P2) through the DArP method by using palladium and copper as catalysts, which are materials or substances that can be used promote or inhibit specific reactions.

The two polymers were almost identical and contained two thiazole rings-pentagonal organic molecules that contain a nitrogen atom and a sulfur atom. However, the position of the nitrogen atom of the thiazole rings was slightly different between P1 and P2 and, as the researchers found out, this led to significant and unexpected changes in their semiconducting properties and structure. Even though P1 had a more planar structure and was expected to have a higher electron mobility, it was P2 who stole the show. The backbone of this polymer is twisted and looks similar to alternating chain links. More importantly, the researchers were surprised to find that the electron mobility of P2 was forty times higher than that of P1 and even higher than that of the current benchmark n-type semiconducting polymer. “Our results suggest the possibility of P2 being the new benchmark among n-type semiconducting materials for organic electronics,” remarks Prof. Michinobu.

Scienmag Dec 2, 2019
Credit: © 2019 KAUST Plant scientists are striving to cultivate crops that can cope with saline soils in the hope…

Non-smokers can get emphysema from air pollution, study finds