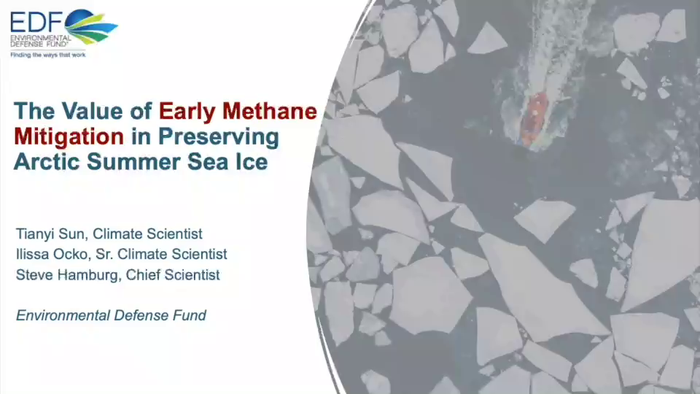 This study is one of the first to look at how practical methane mitigation affects critical parts of the climate system beyond temperature rise. According to the study, if we reach net zero CO2 emissions by 2050 (as motivated by the goals of the Paris Climate Agreement) and quickly enact methane reductions using all currently available solutions, the chances of saving our summer sea ice this century could increase from nearly zero without action to more than 80%.

“Reducing current methane emissions represents a huge opportunity to help pump the brakes on global warming,” said Tianyi Sun, lead author of the study. “Quickly cutting methane along with CO2 is our best chance at preserving Arctic summer sea ice within our lifetimes and for future generations. We must do both.”

Preserving Arctic sea ice is crucial for averting some of the most dire impacts of a warming climate, which a recent report from the Intergovernmental Panel on Climate Change says are occurring much faster than our ability to adapt.

Preservation of Arctic summer sea ice is important not only because it’s a vital part of Arctic communities and ecosystems, but also because its absence can rapidly accelerate the speed of global warming. Loss of the bright reflective sea ice exposes more dark water surface, which absorbs more sunlight and creates additional warming. Warming of the Arctic region also contributes to permafrost thawing, which can add more methane and CO2 to the atmosphere and increase the risk of future warming.

The full study is available today in the journal Environmental Research Letters.

Why methane matters for sea ice

The rapid decline of Arctic summer sea ice is caused by the increasing temperature in the Arctic which is three times faster than the rest of our planet. According to the IPCC, human caused emissions of CO2 and methane are likely the biggest drivers of disappearing Arctic sea ice.

GRAPHIC: Quickly reducing methane along with CO2 could help save Earth’s sea ice.

Methane is the second most important greenhouse gas after CO2 and is responsible for more than 25% of current global warming. Over the following two decades, the methane we emit today will capture over 80 times more heat than an equal amount of CO2. This is why cutting methane now is so important to slow down warming and lower the risk of losing Arctic summer sea ice.

This study is part of a fast-growing body of research to emphasize the important benefits and feasibility of immediate methane reduction. An earlier study found that slashing emissions quickly could slow the speed of warming by about 30%.

About 40% of Arctic summer sea ice has vanished since 1979 (the year record keeping began). We lose about 13% of our sea ice each decade. Recent estimates suggest that we could experience our first ice-free summer as early as the 2030s.

A seasonally ice-free Arctic has significant implications for the global climate. According to recent research, if the Arctic Ocean is free of sea ice during the sunlit part of the year, it could  generate the same heat as 25 years’ worth of human-caused CO2 emissions at today’s level.

Preserving sea ice maintains habitat for walruses, polar bears and other Arctic wildlife and it serves as a vital source for hunting and fishing among Indigenous Arctic communities. It can also help deter geopolitical complications that can arise from open access to Arctic waterways.

At the most recent United Nations climate conference, world leaders from more than 100 countries committed to reduce global methane emissions by 30% below 2020 levels by 2030 – a promising move to help respond to the climate crisis.

The largest sources of methane emissions are from cattle farming, leaky equipment related to oil and gas production, processing and transportation and from organic matter decomposing in landfills. But the most affordable methane reductions can be deployed at the world’s oil and gas facilities. The International Energy Agency estimates the oil and gas industry could reduce 75% of its methane with existing technologies, and more than 40% could be implemented at no net cost because stopping gas leaks ultimately preserves the industry’s product.

Advancement in methane detection technology – including current and future methane-detecting satellites – will also make it easier and faster to find and fix the oil and gas industry’s largest methane leaks.

This study makes it clear, however, that methane-cutting tools and technologies that are available today can make significant progress toward preserving Arctic summer sea ice and slowing the rate of global warming if we deploy them now.

One of the world’s leading international nonprofit organizations, Environmental Defense Fund (edf.org) creates transformational solutions to the most serious environmental problems. To do so, EDF links science, economics, law, and innovative private-sector partnerships. With more than 2.5 million members and offices in the United States, China, Mexico, Indonesia and the European Union, EDF’s scientists, economists, attorneys and policy experts are working in 28 countries to turn our solutions into action. Connect with us on Twitter @EnvDefenseFund