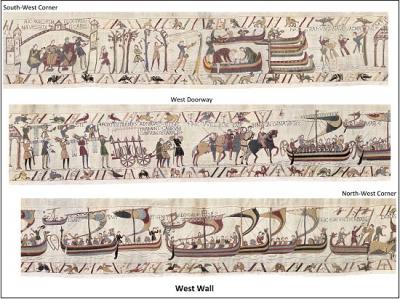 New evidence, published in the Journal of the British Archaeological Association, has confirmed that the Bayeux Tapestry was designed specifically to fit a specific area of Bayeux’s cathedral.

New research suggests the Tapestry was designed to be hung along the north, south and west sides of the nave of Bayeux Cathedral, between the west wall and choir screen. It has long been known that the Tapestry was hung in the cathedral in the fifteenth century, but new analysis of the linen strips on which it is embroidered suggests that it was intended to hang there from the moment it was made in the eleventh century.

This discovery proves that the designer must have visited Bayeux and known the nave’s exact dimensions, adjusting the design accordingly.

The findings shed light on how the artwork, depicting one of British history’s most famous stories, should be displayed ahead of its loan to the UK.

For centuries, there has been debate around where the Bayeux Tapestry was manufactured, who commissioned the embroidery and whether it was originally displayed in England or France. Questions have also persisted over its exact dimensions, and the specific venue it was made for.

“It has always been the case that the simplest explanation is that it was designed for Bayeux Cathedral,” says author Christopher Norton from the University of York. “This general proposition can now be corroborated by the specific evidence that the physical and narrative structure of the tapestry are perfectly adapted to fit the (liturgical) nave of the 11th-century cathedral.”

Professor Norton’s research is based on mathematical calculations, analysis of documentary evidence including of the Tapestry’s linen fabric, and of surviving architectural details. Published data on the Tapestry’s measurements was assessed and compared along with information on medieval cloth sizes, allowing for factors such as shrinkage and missing sections.

By studying the cathedral’s surviving architectural features, Professor Norton also established how the nave would have looked in the 11th century. This enabled him to establish the nave’s original proportions by pinpointing the choir screen’s location – the Tapestry would have fitted five bays of the nave, with the artwork’s ‘narrative’ deliberately structured in relation to doorways and architectural supports.

He recommends that the Tapestry, currently kept in a long U-shaped tunnel, should be displayed along three sides of a rectangular space (31.15 m long x 9.25 m wide). This would evoke the original architectural setting, he adds, and enable viewers to appreciate the artwork as intended.

The findings arrive with the news that the embroidery is set to be lent to Britain (possibly in 2022) for the first time in recorded history, following a promise made by President Macron last year. The upcoming exhibition of the Tapestry, documenting the 1066 Norman conquest of England, has huge significance in UK-European relations – especially as it will go on public exhibition post-Brexit.

For all full-size and a full collection of associated images, visit: https://www.dropbox.com/sh/sredc6h0sybt3hq/AACsQmIoSmd_-lVi3LPfDwxka?dl=0&m=

For a copy of the paper, visit: https://newsroom.taylorandfrancisgroup.com/embargoed-releases/