Electrolysis of water or “water electrosplitting” has received a great deal of attention recently owing to its potential as a clean source of hydrogen, the oft-touted fuel of the future. However, two issues have long stood in the way: the large amount of energy lost, and the cost of electrocatalysts (catalysts used for electrolysis). Fortunately, several new kinds of electrocatalysts have made their appearance, which could potentially solve these issues. 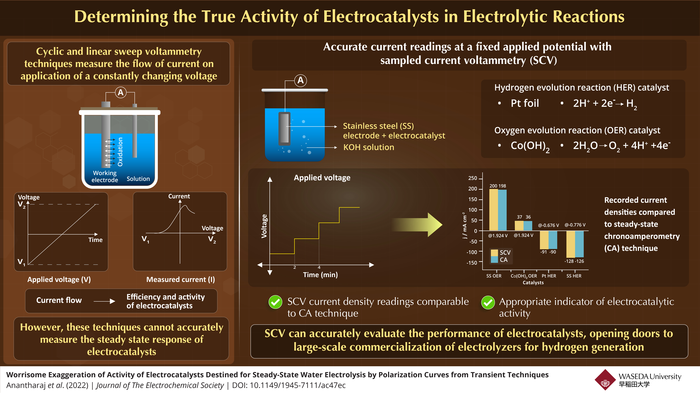 Electrolysis of water or “water electrosplitting” has received a great deal of attention recently owing to its potential as a clean source of hydrogen, the oft-touted fuel of the future. However, two issues have long stood in the way: the large amount of energy lost, and the cost of electrocatalysts (catalysts used for electrolysis). Fortunately, several new kinds of electrocatalysts have made their appearance, which could potentially solve these issues.

The screening of new electrocatalysts is conventionally performed with techniques such as “linear sweep voltammetry” (LSV) and “cyclic voltammetry” (CV), which involve applying a constantly changing voltage to an electrode and monitoring the resulting current. As this current depends on the rate of oxidation or reduction occurring at the electrode, the measured current readings can be used to determine the effect of an electrocatalyst on the speed of the electrolysis reaction.

However, an obvious drawback of these techniques is that they cannot accurately record the “steady-state” response of the electrocatalyst as it does not experience a particular applied voltage long enough to do so. As a result, substantially high current readings are often recorded, which do not reflect the true catalytic activity, hindering the development of efficient electrocatalysts and promotion of the same to large-scale processes.

In a new study published in the Journal of The Electrochemical Society, Assistant Professor Sengeni Anantharaj from Waseda University, Japan, along with his collaborators Dr. Subrata Kundu from CSIR-Central Electrochemical Research Institute, India, and Prof. Suguru Noda from Waseda University have now found a way around this problem, demonstrating an alternate technique called “sampled current voltammetry” (SCV) as a more reliable indicator of electrocatalytic performance at a constant steady-state applied voltage.

“Screening catalysts accurately is just as important as developing new catalysts for all energy conversion reactions,” says Anantharaj, speaking of his motivation. “Our work has highlighted a way to make accurate measurements of electrocatalytic activity previously not possible with conventional transient techniques.”

Before applying the SCV technique, the researchers analyzed the errors resulting from LSV. To show the deviation in current values, they used a steady-state technique called “chronoamperometry” (CA), which is the most accurate method of all yet time consuming to measure current at constant voltages and compared it to the values obtained from LSV.

To determine the activity of electrocatalysts used in electrolysis, they measured the current readings of both the oxygen-producing and hydrogen-producing half-cell reactions. Using a stainless-steel (SS) electrode, precipitated Co(OH)2 (cobalt hydroxide), and platinum foil as catalysts in a KOH (potassium hydroxide) solution, the researchers found that the current density readings from LSV and CA differed significantly, with the difference growing wider at higher applied voltages.

Using the same setup, they then applied the SCV technique and recorded the current densities at various fixed voltages obtained from the steady-state CA responses. “To validate the suitability of SCV, we recorded the CA responses of the SS electrode at various regularly increasing voltages for 130 seconds, within which the SS interface was able to reach a steady state,” elaborates Anantharaj.

From the sampled current readings, the researchers found negligible difference compared to the steady-state CA technique, demonstrating the reliability of the SCV in correctly determining electrocatalyst’s behavior at different voltages. Additionally, while the SCV is particularly useful in the search for a suitable electrocatalyst for water electrosplitting, it can be used to screen electrocatalysts accurately for any electrochemical reaction.

“By addressing the long-standing problem of catalyst performance loss when promoted from the lab to the practical processes, our work could speed up the worldwide adoption of large-scale hydrogen generation from electrolysis,” comments Anantharaj.

It certainly appears we’re now one step closer to the wide adaptation of hydrogen-powered future!

Located in the heart of Tokyo, Waseda University is a leading private research university that has long been dedicated to academic excellence, innovative research, and civic engagement at both the local and global levels since 1882. The University ranks number one in Japan in international activities, including the number of international students, with the broadest range of degree programs fully taught in English. To learn more about Waseda University, visit https://www.waseda.jp/top/en

Journal of The Electrochemical Society