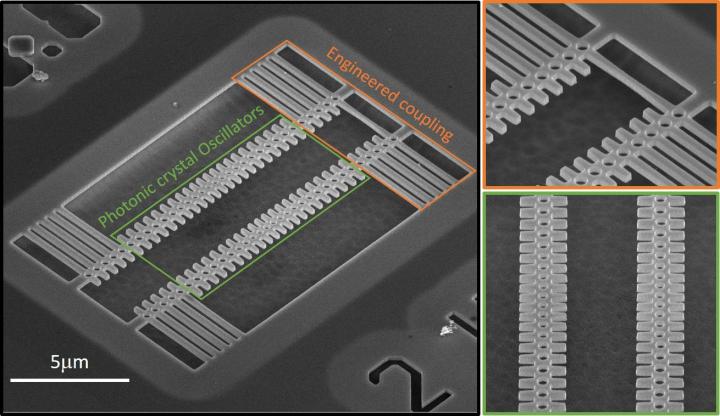 In 1665, Lord Christiaan Huygens found that two pendulum clocks, hung in the same wooden structure, oscillated spontaneously and perfectly in line but in opposite directions: the clocks oscillated in anti-phase. Since then, synchronization of coupled oscillators in nature has been described at several scales: from heart cells to bacteria, neural networks and even in binary star systems -spontaneously synchronized.

Mechanical oscillators are typical in these systems. In the nanoscale, the challenge is to synchronize these. In these lines, an article published in the journal Physical Review Letters -by a team of researchers from the Institute of Nanoscience and Nanotechnology of the UB (IN2UB) together with ICN2 researchers showed a version of mechanic oscillators at a nanoscale. Through a series of experiments, researchers could synchronize two crystal optomechanical oscillators mechanically coupled, located in the same silicon platform and activated through independent optical impulses. These nanometric oscillators have a size of 15 micrometres per 500 nanometres.

While a mechanical pendulum receives impulses from the clock to keep its movement, the optomechanical pendulums use the pressure from radiation, but interaction of oscillators is the same in both experiments. The study also shows that the collective dynamics can be controlled acting externally on one oscillator only.

“Results show a good base for the creation of reconfigurable networks of optomechanical oscillators thanks to these collective dynamics that are dominated by a weak mechanical coupling. This could have applications in photonics, for instance, for pattern recognition tasks or a more complex cognitive process”, notes Daniel Navarro Urrios, from IN2UB, who led the research.