Plants and herbs are a mainstay of traditional medicine. One such plant with many medicinal benefits is Viscum coloratum (V. coloratum), commonly known as mistletoe. This hemiparasitic (semi-parasitic) plant has a long history of use in traditional Chinese medicine to treat arthralgia (commonly known as joint pain), soreness of waist and knees, and “threatened abortion.” 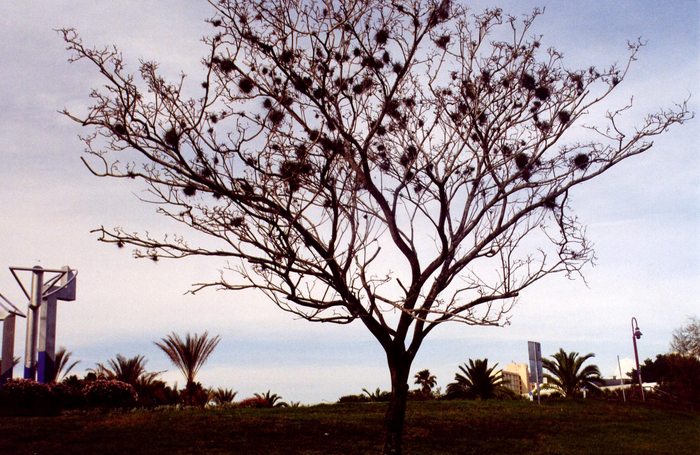 Plants and herbs are a mainstay of traditional medicine. One such plant with many medicinal benefits is Viscum coloratum (V. coloratum), commonly known as mistletoe. This hemiparasitic (semi-parasitic) plant has a long history of use in traditional Chinese medicine to treat arthralgia (commonly known as joint pain), soreness of waist and knees, and “threatened abortion.”

Hemiparasitic plants, such as V. coloratum, obtain their nutrition from their host plants, as well as through photosynthesis. Research has shown that environmental factors such as natural habitat, temperature, soil, etc. affect photosynthesis in plants, as well as the accumulation of various metabolites. At the same time, research has also shown that the metabolites and bioactivities of hemiparasitic plants are influenced by their “host plants.” This indicates that the host plant and environmental factors could affect the medicinal quality of hemiparasitic plants. However, these potential influences are largely overlooked in the use of V. coloratum.

Recently, a team of scientists from China and the UK, led by Dr. Yun-Li Zhao from the Shenyang Pharmaceutical University, used metabolomics to investigate the influence of host plant and environmental factors on the quality of V. coloratum. Speaking of the motivation behind the study, Dr. Zhao says, “The quality of traditional Chinese medicine is usually measured by its origin, but in hemiparasites, the quality is also affected by the host plant. Our research aims to clarify which factor—origin or host—has a greater influence on the quality of mistletoe.” Their results were published in Journal of Pharmaceutical Analysis, on 30 April 2022.

Multivariate analysis showed that the metabolites of the plants could be grouped based on their habitats, indicating that environmental factors played a greater role in determining the quality of the plant. This result was mirrored in the data-fusion analysis. However, data-fusion analysis also showed that the metabolite data of the different plants were fused together in accordance to their hosts, which indicated that host plants also exert a significant influence on the production of metabolites in mistletoe. The analysis of antioxidant activity also revealed the importance of environmental factors in determining the metabolite profile of mistletoe.

Overall, the findings of this novel study put forth strong evidence in support of the team’s metabolomics-based approach to assessing the quality of medicinal plants. According to Dr. Zhao, “Integrating chemical and biological approaches for analysis with data analytics, like multivariate analysis and data fusion, is a powerful strategy to control the quality of hemiparasite herbal medicine, which is essential for its safe use.”

This approach could be expanded to include other herbal medicines and is sure to guide the future development of quality control protocols for traditional Chinese medicine!

Dr. Zhao teaches in the Department of Pharmaceutical Analysis at the Shenyang Pharmaceutical University in China. She has published multiple research papers, and her research interest lies in the fields of pharmacology, pharmacokinetics, and metabolomics.

The authors declare that there are no conflicts of interest that may affect the work in this paper.