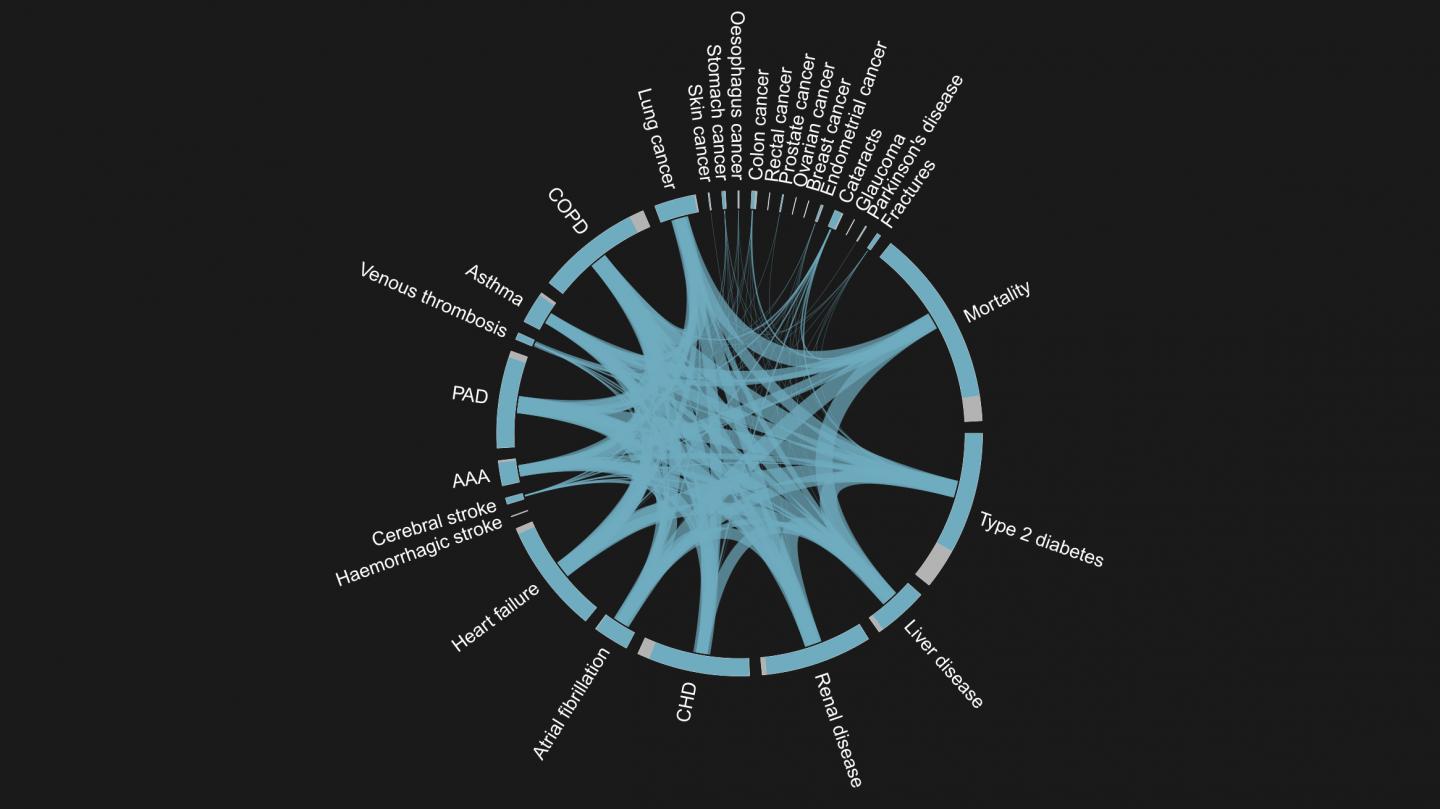 A new study published today in Nature Medicine has identified key risk factors that increase the likelihood of individuals developing not only one but multiple non-communicable diseases, which include cardiovascular disease, cancer, chronic respiratory disease and diabetes.

The analysis of over 11,000 people found that rather than being due to chance, there are often underlying biological links in individuals with multimorbidity, which is defined as the co-occurrence of two or more long-term health conditions and is a growing public health challenge.

Multimorbidity, which affects about two thirds of people aged 65 years or over in the UK, impairs an individual’s quality of life over and above the cumulative burden from each individual disease. Understanding which diseases co-occur not at random but through common mechanisms can aid the identification of preventive strategies and lead to improvements in health care.

A research team led by Dr Claudia Langenberg at the Medical Research Council (MRC) Epidemiology Unit at the University of Cambridge and Berlin Institute of Health, Charité University Medicine Berlin, Germany, analysed the levels of 1,014 metabolites in more than 11,000 participants in the European Prospective Investigation into Cancer (EPIC)-Norfolk study. These metabolites are small circulating molecules, such as sugars, vitamins, or lipids, which objectively reflect influences and interactions of genetics, lifestyle, environment, medical treatment, and gut microbes, on human physiology.

By integrating all of the available data to gain a holistic view, the team was able to identify and document the association of these metabolites with 27 different non-communicable diseases that are frequently observed in multimorbidity, finding that almost half of the metabolites examined were associated with at least one of the 27 diseases. Two-thirds of the disease associated metabolites were shared by multiple diseases and hence with the onset of multimorbidity, for example elevated plasma levels of the carbohydrate N-acetylneuraminate were associated with a higher risk of 14 diseases.

The researchers then examined the relationship between more than 50 characteristics of EPIC-Norfolk study participants identified when they were enrolled onto the study, ranging from waist-to-hip-ratio to smoking behaviour, to identify to which extend the profound changes in small molecules can explain the effect of common risk factors onto disease risk. This analysis highlighted poor kidney and liver health, blood glucose and lipids, gut microbial diversity, and lifestyle factors as potential targets tor prevention or treatment to lower the burden of multimorbidity.

Dr Claudia Langenberg, who led the study at the MRC Epidemiology Unit said: “Such a deep understanding of molecular process has the potential to not only improve treatment of disease, but also aid earlier identification of individuals at risk. For example, we found that several metabolites measured were better predictors of future kidney-related disease risk than the current standard clinical tests.”

“This work has only been possible because we were able to measure the concentrations of hundreds of small molecules in patient’s blood using stored samples taken up to twenty years before the onset of any disease, and the electronic health record linkage of more than 11,000 EPIC-Norfolk study participants.”

Dr Maik Pietzner, co-lead author of the study at the MRC Epidemiology Unit, added: “Our observation that two-thirds of the small molecules were linked to at least two, even seemingly unrelated, diseases strongly contrasts the disease-centric approach still common in biomedical research. People do not usually develop just one long-term disease, so by taking a broader approach rather than just focusing on one disease at a time we can gain a more useful understanding of the underlying biological processes. Treatments that target pathways that are shared by two or more of a patient’s conditions may be better able to provide benefit in a more consistent way that avoids increasing the risk of other conditions.”

Dr Ivan Pavlov, programme lead at the Medical Research Council, said: “This study moves us one step further towards understanding the biochemical pathways involved in multimorbidity, which is not just critical for early disease detection and prediction, but identifying these metabolic footprints could help to develop preventive therapeutics in the future. Importantly, the paper discovers possible links between seemingly unrelated diseases opening potential new avenues for research.”

This work provides an unprecedented reference map of human metabolism, which the team made publicly available to the scientific community through the interactive webserver omicscience.org.