DENVER – The drought currently impacting the upper Colorado River Basin is extremely severe. A new study from federal government and university scientists led by the Bureau of Reclamation and published in Geophysical Research Letters identifies a second-century drought unmatched in severity by the current drought or previously identified droughts. 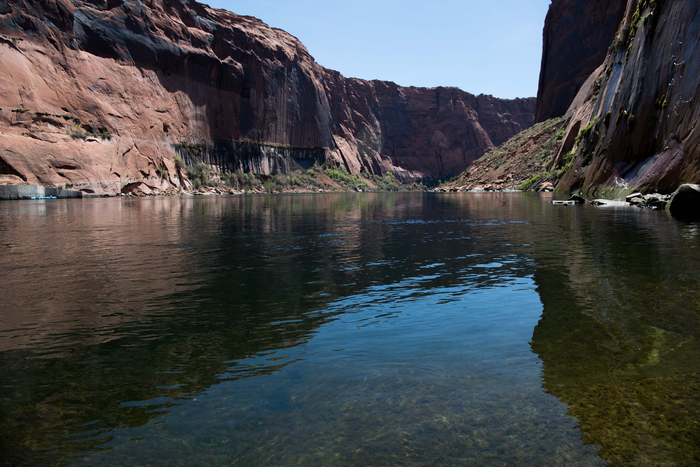 DENVER – The drought currently impacting the upper Colorado River Basin is extremely severe. A new study from federal government and university scientists led by the Bureau of Reclamation and published in Geophysical Research Letters identifies a second-century drought unmatched in severity by the current drought or previously identified droughts.

“Previous studies have been limited to the past 1,200 years, but a limited number of paleo records of moisture variability date back 2,000 years,” said Subhrendu Gangopadhyay, lead author and principal engineer for the Water Resources Engineering and Management Group at the Bureau of Reclamation. “While there has been research showing extended dry periods in the southwest back to the eighth century, this reconstruction of the Colorado River extends nearly 800 years further into the past.”

“Tree-ring records are sparse back to the second century,” said Connie Woodhouse, a professor at the University of Arizona and a study co-author. “However, this extreme drought event is also documented in paleoclimatic data from lakes, bogs, and caves.”

The authors reconstructed the streamflow at Lees Ferry on the Colorado River to develop these findings. Paleoclimatic data for the reconstruction is from a gridded network of tree-ring-based Palmer Drought Severity Index values. These extended records inform water managers whether droughts in the distant past were similar to or more severe than observed droughts in the past centuries. The baseline for the study’s analysis uses the natural flow estimates data from 1906 to 2021 from the Lees Ferry gage.

The reconstructed streamflow data developed in this research is now available for public use. It is anticipated that water managers will use this new extended data to understand past droughts better and to plan for future droughts.

“The results of this work can provide water managers with an increased understanding of the range of flow variability in the Colorado River,” added Gangopadhyay. “It should provide information to help water managers plan for even more persistent and severe droughts than previously considered.”

The Colorado River basin is experiencing a severe 22-year drought with extensive impacts throughout the West. This includes water for homes and crops to the generation of electricity that supports everything we do. Drought impacts everything within the basin.

Study co-authors also include Greg McCabe of the U.S. Geological Survey, Cody Routson from Northern Arizona University, and Dave Meko of the University of Arizona.

Reclamation continues to work with its partners to mitigate the impacts of this current 22-year drought. To learn more about the operations on the Colorado River, please visit https://www.usbr.gov/ColoradoRiverBasin/.