A new study that links the location of brain injury to levels of depression in patients following the injury has identified two distinct brain networks; one associated with increased depression symptoms and one associated with decreased depression symptoms. The large-scale study led by researchers with University of Iowa Health Care expands on previous findings and suggests that these brain networks might be potential targets for neuromodulation therapies to treat depression. 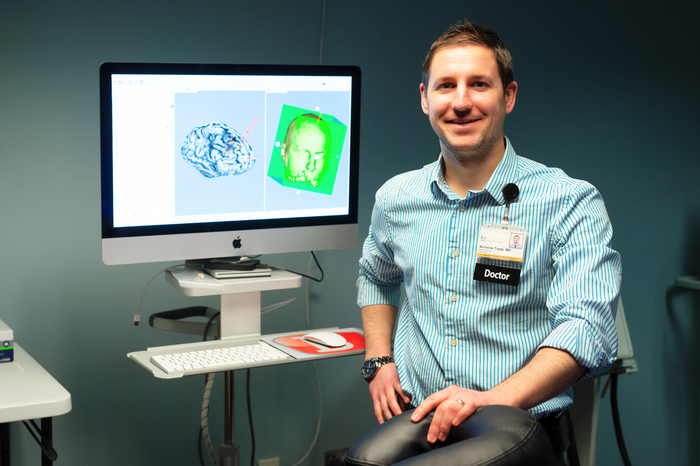 A new study that links the location of brain injury to levels of depression in patients following the injury has identified two distinct brain networks; one associated with increased depression symptoms and one associated with decreased depression symptoms. The large-scale study led by researchers with University of Iowa Health Care expands on previous findings and suggests that these brain networks might be potential targets for neuromodulation therapies to treat depression.

Neuromodulation therapies such as transcranial magnetic stimulation, or deep brain stimulation, are emerging as new non-pharmacological treatments for mood disorders. However, understanding which areas of the brain to target to get the best therapeutic effect is still limited.

The new findings, which are published in the journal Brain, used brain imaging scans and depression scores from 526 patients who had acquired localized areas of brain injury from a stroke or other type of traumatic brain injury. A detailed statistical analysis of the patients’ data allowed the researchers to correlate the brain lesion locations with levels of depression experienced by the patients in the months following the brain injury.

“We found some really interesting results identifying specific brain structures that were associated with higher levels of depression post lesion, and surprisingly, also found some areas that were associated with lower-than-average levels of depression post lesion.” says Nicholas Trapp, MD, UI assistant professor of psychiatry and lead author of the study.

Risk and resilience networks in depression

Using data from functional brain scans of healthy subjects to understand how these structures were interconnected, the researchers then discovered that the risk and resilience regions were not randomly scattered within the brain. Instead, regions most strongly associated with increased depression coincided with the nodes of the so-called salience network, which is involved in task reorientation, attention, and emotion processing.

In contrast, peak resilience regions that were associated with less depression, were part of a network known as the default mode network, which is thought to be involved in introspection, or self-referential thinking.

“Previous studies have suggested nodes of this network may be hyperactive in people with depression, who are prone to ruminating,” says Trapp, who also is a member of the Iowa Neuroscience Institute. “It’s possible that lesions within this network may alter that circuit in a way that leads people to report less depression.”

Patients whose brain lesions did not fall within either network had an average score of depression following their brain injury and provided a comparison group in the study.

The initial lesion mapping approach used by Trapp and his colleagues is a powerful tool for inferring if a brain region is required for a behavior, emotion, or cognitive ability. If damage to a specific area leads to loss of the ability, the area is most likely required for the ability. However, identifying an effect when the regions are spread across a network within the brain requires data from many patients, which may have hindered earlier smaller studies.

Trapp and his team were able to conduct they study thanks to two large patient registries: the Iowa Neurological Patient Registry based at the UI, and the Vietnam head injury study, which is affiliated with researchers at Northwestern University.

“Being able to identify these brain regions is really a product of having a large sample to study,” Trapp says. “It’s very challenging to recruit these patients and collect the data that’s required. The decades of efforts here at the University of Iowa (establishing and maintaining the Iowa Neurological Patient Registry) positions us extremely well to do these types of studies.”

Trapp hopes the findings will improve understanding of the causes of depression and potentially lead to better treatments.

“This could open the doors to potential studies looking at deep brain stimulation, or non-invasive forms of stimulation like TMS, where we might be able to modulate the specific brain areas or networks that we’ve identified, to try to get antidepressant effect, or potentially other therapeutic effects,” he says.

In addition to Trapp, the UI research team included Aaron Boes, Joel Bruss, Kenneth Manzel, and Dan Tranel, of the UI Department of Neurology, and Jordan Grafman of the Shirley Ryan AbilityLab, at Northwestern University Feinberg School of Medicine in Chicago

The authors report no competing interests.