Circadian rhythms are inherent cycles of approximately 24 hours that regulate various biological processes, such as sleep and wakefulness. A research group at Nagoya University in Japan has recently revealed that neural networks play an important role in the regulation of circadian rhythms through the mediation of an intracellular molecule called cyclic adenosine monophosphate (cAMP). 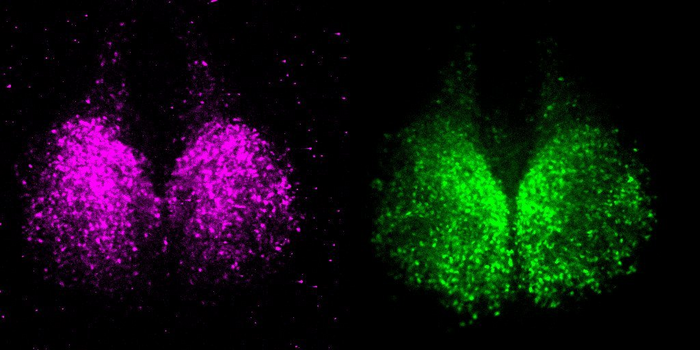 Circadian rhythms are inherent cycles of approximately 24 hours that regulate various biological processes, such as sleep and wakefulness. A research group at Nagoya University in Japan has recently revealed that neural networks play an important role in the regulation of circadian rhythms through the mediation of an intracellular molecule called cyclic adenosine monophosphate (cAMP).

This finding may pave the way for new strategies to treat sleep disorders and other chronic health conditions affected by disruption of the circadian rhythm. The study was published in the journal Science Advances.

In living things, almost every cell contains a biological clock that regulates the cycle of circadian rhythms. In mammals, a group of neurons that form a structure called suprachiasmatic nucleus (SCN) is known as the master clock. It is located in the hypothalamus of the brain and synchronizes biological clocks in the peripheral tissues.

Circadian rhythms are regulated by the transcription and translation mechanism of clock genes, which encode proteins that regulate daily cycles. However, some scientists suggest that in the SCN, so-called second messengers, such as cAMP and calcium ions, are also involved in the regulation of circadian rhythms. Second messengers are molecules that exist in a cell and mediate cell activity by relaying a signal from extracellular molecules.

“The functional roles of second messengers in the SCN remain largely unclear,” said Dr. Daisuke Ono, the lead author of the study. “Among second messengers, cAMP is known as a particularly important molecule in various biological functions. Therefore, understanding the roles in the SCN may lead to new strategies for the treatment of sleep disorders and other health problems due to circadian rhythm disruption.”

To investigate this issue, a Nagoya University research team led by Dr. Ono, in collaboration with Yulong Li of Peking University and Takashi Sugiyama of Evident Corporation, conducted a study focusing on cAMP in the SCN.

They next focused on an extracellular signaling molecule called vasoactive intestinal peptide (VIP). Its receptor is known to modulate cAMP in the SCN. To analyze how VIP affects the rhythm of cAMP, they inhibited VIP signaling. Their results showed a loss of the rhythm of cAMP, indicating that the intracellular cAMP rhythms are regulated by VIP in the SCN. If this is correct, then there should also be a circadian rhythm in the VIP release.

To verify this, they introduced a G-protein-coupled receptor-activation-based (GRAB) VIP sensor using green fluorescent protein. Time-lapse imaging of the VIP release in the SCN revealed a clear circadian rhythm. Furthermore, this VIP release rhythm was abolished by blocking the function of a neural network. These results indicate that VIP is released rhythmically depending on neuronal activity and that the VIP release rhythm regulates the intracellular cAMP rhythm.

Lastly, to determine how cAMP affects the rhythm of clock genes’ transcription and translation mechanisms, they conducted experiments using mice. They expressed a light-inducible enzyme called adenylate cyclase (bPAC) in the SCN slice and measured the protein level of the clock gene Per2, using bioluminescence imaging. They then irradiated the cells with blue light to verify the effect of cAMP on the circadian rhythm. The results showed that the manipulation of cAMP by blue light changed the circadian rhythm of the clock gene. They also manipulated the rhythm of cAMP in the SCN of living mice and found that the behavioral rhythm also shifted. These results suggest that intracellular cAMP affects both molecular and behavioral circadian rhythms that involve clock genes.

“We concluded that intracellular cAMP rhythms in the SCN are regulated by VIP-dependent neural networks,” Ono explained. “Furthermore, the network-driven cAMP rhythm coordinates circadian molecular rhythms in the SCN as well as behavioral rhythms. In the future, we would like to elucidate the ancestral circadian clock, which is independent of clock genes and exists universally in life.”

The study, “Network-driven intracellular cAMP coordinates circadian rhythm in the suprachiasmatic nucleus” was published online in the journal Science Advances on January 4, 2023, at DOI: http://www.science.org/doi/10.1126/sciadv.abq7032.