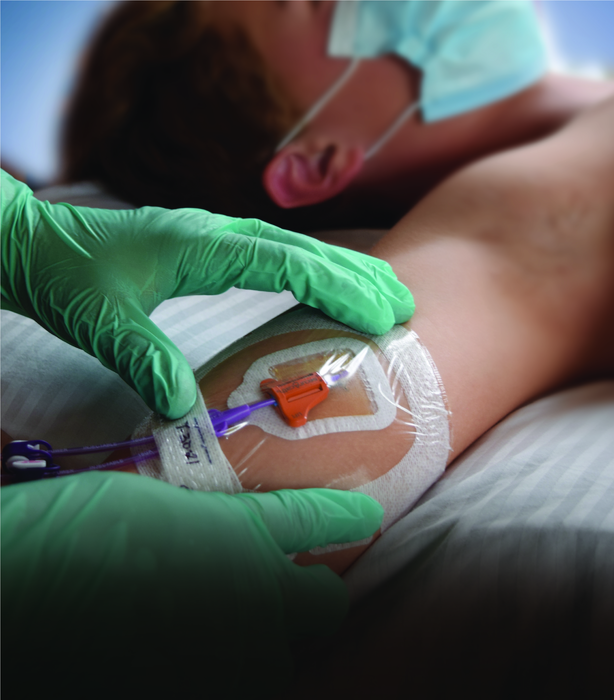 Catheter migration and dislodgement have a tremendous impact on patient outcomes, as well as healthcare costs, and “the evidence suggests that subcutaneous anchor systems are superior to other engineered or improvised securement systems when it comes to decreasing catheter migration,” said lead author Jon Bell, MSN, RN, VA-BC.

CVADs are essential for patient care, and every month clinicians insert thousands of central venous catheters (CVCs) and peripherally inserted central catheters (PICCs) in patients. Yet there is little conclusive evidence from randomized clinical trials or other studies about which securement methods work best to prevent the catheters from being dislodged or moved, or to reduce bloodstream infections.

This has contributed to “a standard of care that is fractured and confusing and created a real need to gather evidence on the best securement methodology,” said Bell.

Currently, most CVCs are secured using suture-based systems, while the majority of PICCs are secured with combinations of dressings and adhesive securement devices. SecurAcath® by Interrad Medical is the world’s only subcutaneous anchor securement system that can be used on both types of catheters.

Researchers conducted a systematic review of more than 8,000 studies to examine safety and efficacy outcomes related to CVAD securement. In the studies with good comparative data on rates of catheter migration and dislodgement, researchers found clear benefits for the subcutaneous anchor securement system.

The median incidence of migration and dislodgement for SASS was just 1.76 percent, compared to 4.17 percent for integrated devices (device dressing with built-in securement technology), 6.77 percent for suture-based systems, and 9.69 percent for adhesive securement devices.

The data offered no firm conclusions about which method was best at reducing central-line associated bloodstream infections (CLABSI), and additional research is required to examine the actual effects of securement on patient outcomes. However, Bell suggests that “given the current evidence, it is likely that subcutaneous anchor securement systems are the future of CVAD securement.”

The new review article adds to the evidence supporting the use of SecurAcath, the only currently available subcutaneous anchor securement system. As Michelle Hawes will describe in her AVA presentation, a 2020 study showed that SecurAcath also significantly reduced the risk of bloodstream infections compared to adhesive securement device methods for PICCs.

Moreover, a retrospective study, found that a single catheter secured with SecurAcath lasted throughout the entire length of need in 98 percent of cases. In contrast, 20 percent of catheters secured with adhesive securement devices needed to be replaced. Despite higher upfront costs with SecurAcath, the better outcomes and simplified care and maintenance will result in lower overall healthcare costs, Hawes will explain.

Eloquest Healthcare, Inc. is a wholly owned subsidiary of Ferndale Pharma Group, Inc. It is focused specifically on serving hospitals, their healthcare practitioners, and patients. The company has partnered with Interrad Medical to support US sales of the SecurAcath device. Eloquest Healthcare delivers intuitive solutions that complement treatment protocols and address goals related to improving patient outcomes, quality of care delivered, and cost avoidance. More information can be found at www.eloquesthealthcare.com.