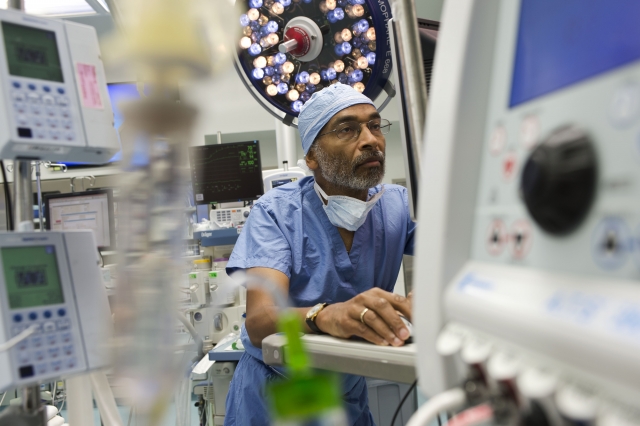 Emery Brown: “Now that we understand how it works, how can we devise new strategies for anesthesia?”

In operating rooms around the world, machines attached to anesthetized patients blip and bleep, reporting second-by-second accounts of vital organs. Blood circulation and respiration are closely monitored, but the one organ that is drugged, the brain, has no readout. Anesthesiologists simply watch for signs of wakening, says Emery Brown, the Edward Hood Taplin Professor of Medical Engineering and Computational Neuroscience at MIT.

Brown, who won a 2007 National Institutes of Health Director’s Pioneer Award to study how anesthesia drugs work, hopes to change that. Stat.

Anesthesia drugs have been used in the U.S. for more than 160 years without being well understood, so they’ve taken on an air of mystery. But according to Brown, the way they work is simple. The same way a loud, long tone, like the Emergency Broadcast tone, drowns out all other noise, anesthesia drugs create long, large, and lasting brain waves that make it impossible for new signals to be passed from one brain region to another. “If your brain can’t transmit information, you’re not going to be conscious,” says Brown.

These waves readily appear on an electroencephalogram (EEG), a recording of brain waves. “They are like big tsunami waves,” he says. “WAA–WAA–WAA.”

Since 1937, it has been possible to monitor an anesthetized brain using EEG. But until recently, no one understood what the readouts meant. Brown’s research has brought together the neuroscience underlying anesthesia, revealing the roles of different brain regions and the circuits that connect them in producing these readouts.

Brown, who is also an anesthesiologist at Massachusetts General Hospital (MGH), now understands those EEG readouts so well that he has put them to work in the operating room. He and collaborators have developed computer programs that transform the scribbles on an EEG into a spectrogram, a colorful visual display that provides an at-a-glance picture of the state the brain is in.

Using this display to monitor his patients, Brown has found that, particularly among the elderly, he can cut the dose of anesthetic used by 50 to 75 percent in some cases. “I’d never have the courage to do that without monitoring because the amount of drug that is needed is so little, I’d be afraid the patient will have awareness,” says Brown. “But with the EEG, I can be sure the amount is appropriate.”

Real-time monitoring also makes automatic control of anesthesia possible. The biggest need for automated control of anesthesia is among patients who are in medically induced comas to aid recovery from brain trauma or intractable seizures. During the days, or in some cases, months, that these patients are anesthetized, their comas are managed sporadically by nurses in intensive care units. “There’s no way you can keep their brains precisely controlled with intermittent changes,” says Brown. “It’s a very compelling need.”

While Brown is working towards meeting that need — he has submitted patent applications on his devices and is seeking U.S. Food and Drug Administration approval through MGH — he is also looking ahead. Brown’s monitoring technology has made it clear that the most common anesthesia drugs used today act in different ways on different brain regions to control pain and consciousness. This insight opens the door for these drugs to be used in a more informed way.

It also provides Brown the foundation he needs to begin reinventing anesthesia. In 2012, he received a National Institutes of Health Director’s Transformative Research Award to begin the redesign. “We’re taking a step back and saying, now that we understand how it works, how can we devise new strategies for anesthesia?” he says.

Brown envisions — and is working to design — new approaches that target the right parts of the brain for the right amount of time, if possible, without the side effects of existing drugs, such as confusion or clouded thinking after surgery. This work will most certainly lead to new strategies for managing other troubling brain states, such as chronic pain, depression, and insomnia, he says. “Once you start paying attention to what happens to people under anesthesia, the insights you get are amazing.”