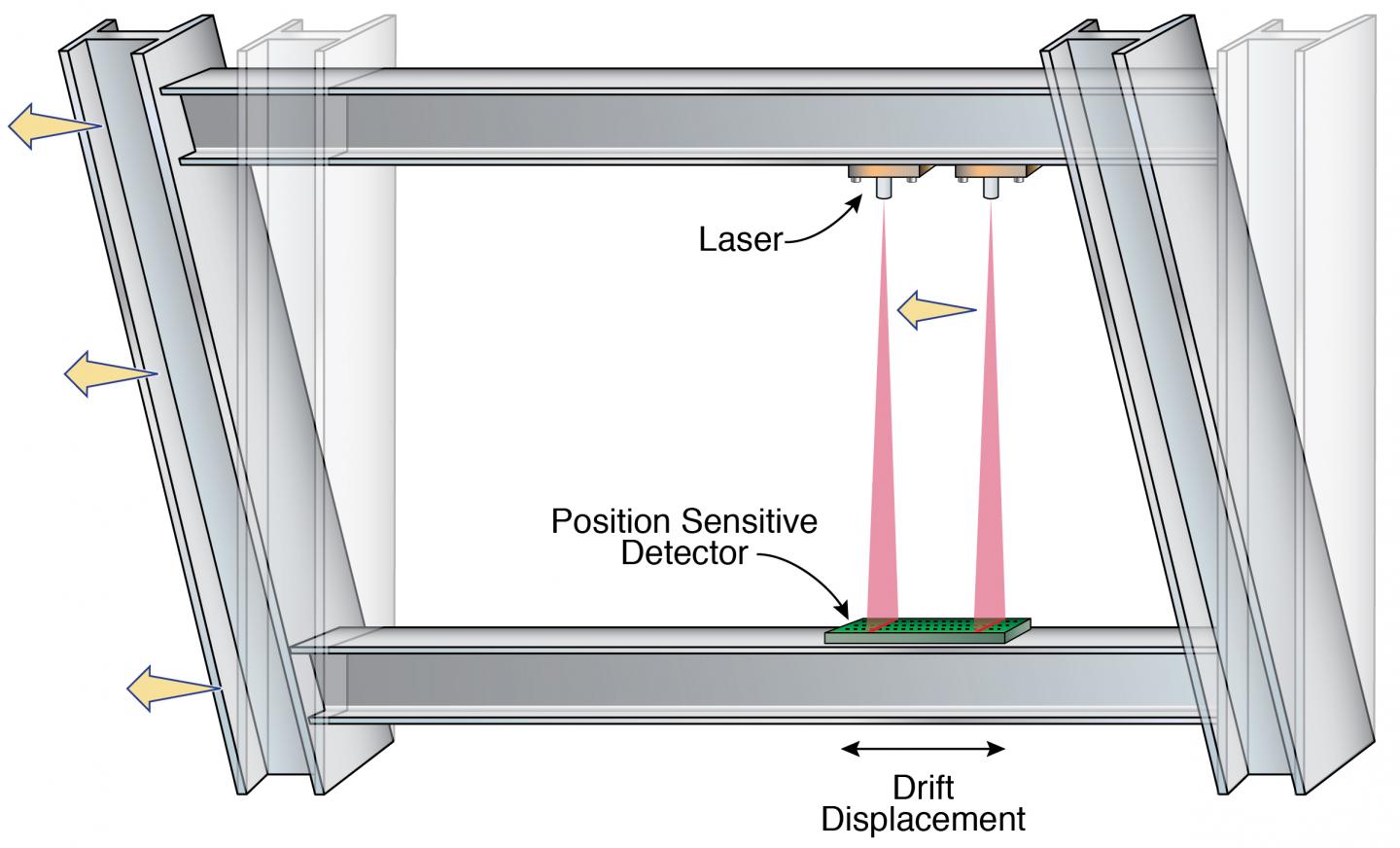 Last week’s massive southern California earthquakes shut down Ridgecrest Regional Hospital throughout the July 4 holiday weekend while the tiny town of Ridgecrest assessed the damages. A new optical sensor developed at Lawrence Berkeley National Laboratory (Berkeley Lab) could speed up the time it takes to evaluate whether critical buildings like these are safe to occupy shortly after a major earthquake.

The technology – which autonomously captures and transmits data depicting the relative displacement between two adjacent stories of a shaking building – is able to provide reliable information about building damage immediately following an earthquake, and could expedite efforts to safely assess, repair, and reoccupy buildings post-quake.

Scientists and engineers at Berkeley Lab, Lawrence Livermore National Laboratory, and the University of Nevada-Reno began working to design an optical method of measuring interstory drift within buildings in 2015. After four years of extensive peer-reviewed research and simulative testing at the University of Nevada’s Earthquake Engineering Laboratory, the Discrete Diode Position Sensor (DDPS) will be deployed for the first time this summer in a multi-story building at Berkeley Lab – which sits adjacent to the Hayward Fault, considered one of the most dangerous faults in the United States.

“Until now, there’s been no way to accurately and directly measure drift between building stories, which is a key parameter for assessing earthquake demand in a building,” said David McCallen, a senior scientist in the Energy Geosciences Division at Berkeley Lab and faculty member at the University of Nevada, who leads the research collaboration.

The debut of DDPS comes as governments at every level make post-earthquake building inspection and reoccupation a central focus of response planning, and as the highly anticipated next generation of remote connectivity – 5G – becomes reality for rapid data transmission. “We are excited that this sensor technology is now ready for field trials, at a time when post-earthquake response strategies have evolved to prioritize safe, continued building functionality and re-occupancy in addition to ‘life safety,'” McCallen said.

Measuring building interstory drift has been a factor in assessing buildings for post-earthquake damage for some time, yet finding a reliable method to do so has been fraught with challenges. Traditionally, engineers mounted strong motion earthquake accelerometers at select elevations to secure data on the back-and-forth and side-to-side force imposed on a shaking building. But processing the acceleration data from these instruments to obtain building drift displacements is very challenging due to the frequency limitations of the sensors, especially when buildings have sustained permanent displacements associated with damage. Even more difficult is receiving data quickly enough to inform decision-making on continuity of operations and occupant safety. In addition, because typical building accelerometer-based instrumentation can be quite costly, systems tend to be very sparse with accelerometers on relatively few buildings.

DDPS leverages a promising new alternative for directly measuring building interstory drift that combines laser beams with optical sensors. This technique centers around projecting laser light across a story height to sense the position at which the light strikes a detector located on the adjacent building floor to directly measure structural drift. The tool developed at Berkeley Lab relies on utilizing a laser source and position sensitive detector. Making use of a geometric array of small, inexpensive light-sensitive photodiodes, the sensor is able to instantly track the position of an impinging laser beam.

“Previous generations of DDPS were quite a bit larger than the system we are now able to deploy,” says McCallen. “Based on design advancements and lessons learned, the sensor is a quarter of the size of our original sensor design, but features 92 diodes staggered in a rectangular array so that the laser beam is always on one or more diodes.”

So far, DDPS has held up to three rounds of rigorous experimental shake table testing.

“The rigorous testing the DDPS has undergone indicates how the drift displacements measured on the three testbeds compared to representative drifts that could be achieved on an actual full-scale building undergoing strong shaking from an earthquake,” McCallen said.

Why DDPS is smart for cities

The most populous town affected by the earthquakes in southern California earlier this month was Ridgecrest itself, a city of 29,000 which sits at the epicenter of a magnitude 7.1 earthquake which took place on July 5. Even though this is a small population center, the building damage estimates are still in the $100-million range.

If an earthquake of that magnitude were to hit Los Angeles 150 miles to the south of tiny Ridgecrest, or San Francisco, nearly 400 miles north, literally hundreds to thousands of buildings would be at stake for damage. In that scenario, the ability to measure and display key interstory drift information immediately after an earthquake would provide critical new data for making informed decisions on building occupancy – giving first responders information to help guide their efforts to evacuate a building, and municipalities the potential to maintain functional use of important facilities such as hospitals.

In addition, understanding a building’s drift profile would allow a quick determination of building damage potential, letting building inspectors know where to look for potential damage. This will be an important capability in moving beyond time-consuming and challenging manual inspections of hundreds of buildings after the next major urban earthquake.

McCallen noted, “The major earthquakes that struck in southern California this past week serve as a reminder of the risks associated with seismic activity across many regions of the United States. These events put an exclamation point on the need for continued societal focus on earthquake readiness and resilience, including an ability to provide the sensors and data analysis that can rapidly measure infrastructure health and inform the most effective response after the next major quake.”

This research was funded by the U.S. Department of Energy’s (DOE) Nuclear Safety Research and Development (NSR&D) Program managed by the Office of Nuclear Safety within the DOE Office of Environment, Health, Safety and Security. An objective of the NSR&D program is to establish an enduring Departmental commitment and capability to utilize NSR&D in preventing and/or reducing high consequence-low probability hazards and risks posed by DOE and NNSA nuclear facilities, operations, nuclear explosives, and environmental restoration activities.

Computer simulations visualize how DNA is recognized to convert cells…