Buckyballs can pave the way for molecular electronics 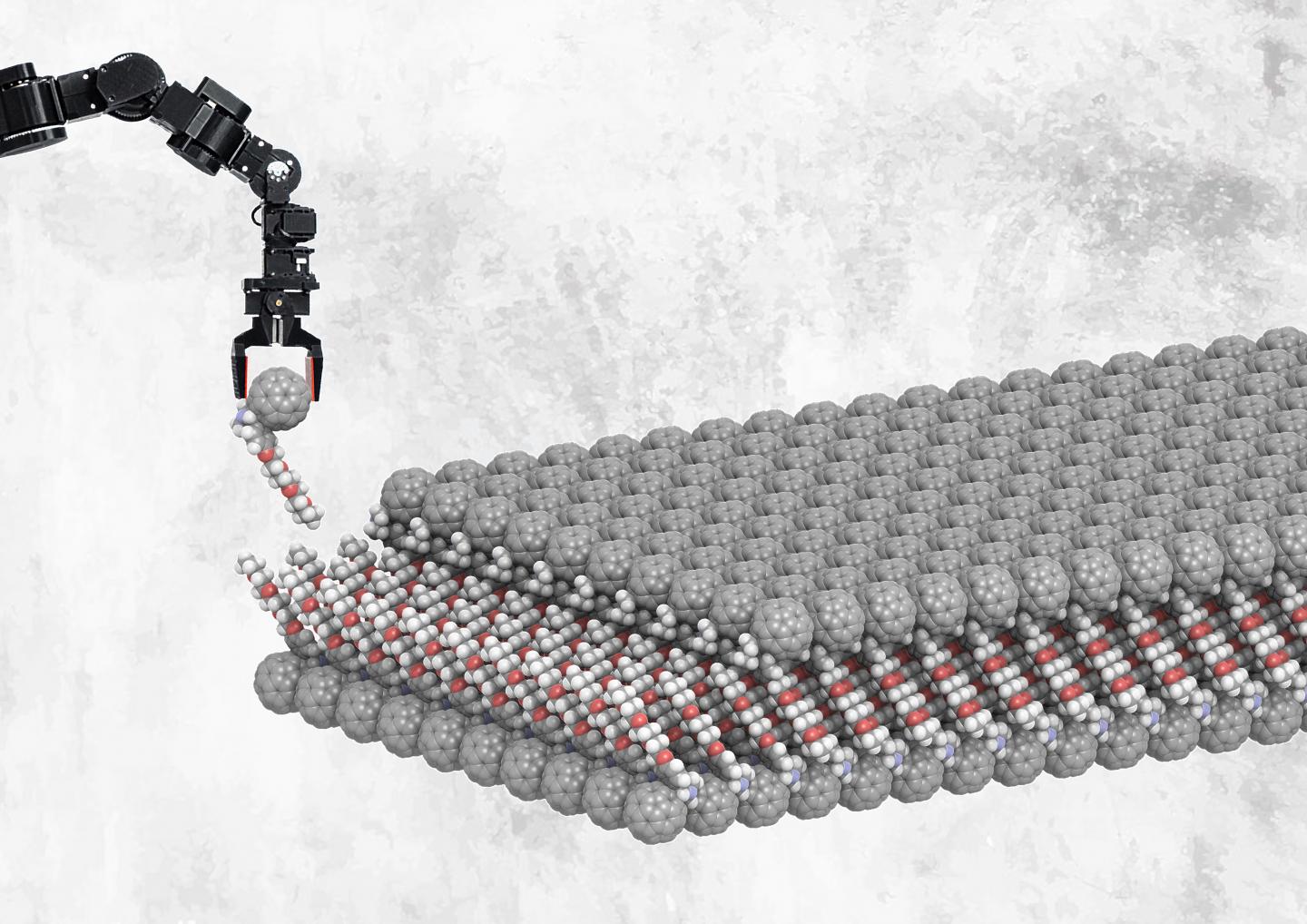 Organic self-assembled monolayers (SAMs) have been around for over forty years. The most widely used form is based on thiols, bound to a metal surface. However, although the thiol SAMs are very versatile, they are also chemically unstable. Exposure of these monolayers to air will lead to oxidation and breakdown within a single day. University of Groningen scientists have now created SAMs using buckyballs functionalized with ‘tails’ of ethylene glycol. These molecules produce self-assembled monolayers that have all the properties of thiol SAMs but remain chemically unchanged for several weeks when exposed to air. This robustness makes them much easier to use in research and in devices. An article about these new SAMs was published in Nature Materials on 30 January.

Self-assembled monolayers are dynamic structures, explains University of Groningen Associate Professor of Organic-Materials Chemistry and Devices Ryan Chiechi: ‘These monolayers self-repair and the molecules will continually find the most efficient packing. Furthermore, all processes are reversible, and it is possible to change their composition.’ This distinguishes SAMs from other monolayers that are used to functionalize surfaces. ‘These are often very stable, but they don’t self-assemble and lack the dynamics of SAMs.’

SAMs based on the binding of thiols (sulfur-containing groups) to metal are widely studied and used. Applications of SAMs range from the control of wetting of- or adhesion to surfaces, creating chemical resistance in lithography, to sensor production or nanofabrication. The monolayers can also be used to produce molecular electronics. Chiechi: ‘Electric current will pass through such a monolayer by quantum tunneling. And small modifications to the molecular layer can alter the tunneling properties. Through such chemical tailoring, it is possible to create new types of electronics.’

However, the most widely used thiol-based SAMs are sensitive to oxidization when exposed to air. Without protection, they will not last a single day. ‘This means that you need all kinds of equipment to keep the air out when working with these SAMs for molecular electronics,’ explains Chiechi. ‘It also makes it difficult to use them in a biological context.’

This is where the new buckyball-based SAMs come in. In a joint effort, scientists from the Stratingh Institute for Chemistry and the Zernike Institute for Advanced Materials at the University of Groningen have discovered and characterized the properties of glycol-ether functionalized fullerenes. The buckyballs adhere to metal surfaces even stronger than thiols. The glycol-ether tails are polar and in organic solvents, this induces the formation of a bilayer. ‘You simply put the metal in a solution of these functionalized buckyballs and the bilayer will form through self-assembly,’ says Chiechi. Furthermore, SAMs prepared in this way are very resistant to oxidization: when left exposed to air, they will remain intact for at least 30 days.

‘Our results strongly suggest that the tails of the molecules are intertwined. This results in a stable and very dynamic structure where molecules are free to move, which is typical for a SAM,’ says Chiechi. The outer layer can be replaced by adding other functionalized groups. Chiechi and his colleagues added spiropyrans (molecules that will change shape when exposed to UV light) connected to a glycol-ether tail. By placing an electrode on the outer layer, tunneling through the SAM was measured. The scientists showed that changing the shape of the spiropyran moiety with light also changed the conductance by several orders of magnitude.

There are other alternatives for thiol-based SAMs but they all have limitations. ‘We believe that our SAMs have all the properties of thiol-based SAMs, with resistance to degradation by air as a large bonus’, concludes Chiechi. ‘Furthermore, we have shown that our system can be used to create molecular electronics.’ And it also appears to be a very useful platform for studying the behavior of SAMs. ‘You can do this on your lab bench without any need for protection.’ Chiechi thinks that his system might be useful for studying the behavior of bilayers, including the lipid bilayers that form cell membranes.

The ability to change the composition of the SAMs opens up interesting applications in molecular electronics. Chiechi: ‘This might be used to create a topological computer architecture, for neuromorphic computing.’ Changes in the composition of the SAM could produce a memristor and possibly a system for stochastic computing, which uses the probabilities of 1s and 0s to represent numbers in a bitstream. ‘This could be represented by the fraction of one type of molecule in the SAM.’ Before this can become a reality, however, more work will have to be done, for example, to understand why the glycol-ether phase is such an efficient tunneling medium.

Many organic compounds will self-assemble on a surface into structures of just one molecular layer, a so-called self-assembled monolayer or SAM. These SAMS are being used by scientists for different purposes. Most SAMs are based on molecules that bind to the surface with sulfur-containing chemical groups (thiols), but these form complexes that are chemically unstable in air. Organic chemists from the University of Groningen created SAMs using carbon buckyballs functionalized with ‘tails’ of ethylene glycol. These molecules produce self-assembled monolayers that have all the properties of thiol SAMs but remain chemically unchanged for several weeks when exposed to air. This robustness makes them much easier to use in research and in devices, such as in molecular electronics.

Glutamate in the brain has unexpected qualities, researchers show with new analysis method