New Scottish fossil sheds light on the origins of lizards

A fossil discovery from Scotland has provided new information on the early evolution of lizards, during the time of the dinosaurs. 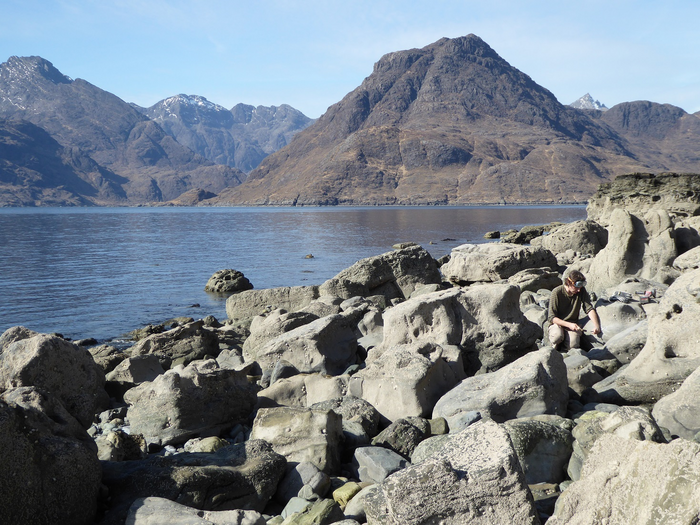 A fossil discovery from Scotland has provided new information on the early evolution of lizards, during the time of the dinosaurs.

The tiny skeleton discovered on the Isle of Skye, called Bellairsia gracilis, is only 6 cm long and dates from the Middle Jurassic, 166 million years ago. The exceptional new fossil comprises a near-complete skeleton in life-like articulation, missing only the snout and tail. This makes it the most complete fossil lizard of this age anywhere in the world.

Bellairsia has a mixture of ancestral and modern features in its skeleton, providing evidence of what the ancestor of today’s lizards (which are part of the wider animal group known as ‘squamates’) might have looked like.

The research, a joint project between researchers at the universities of Warsaw, Oxford and UCL, is reported in the journal Nature. First author Dr Mateusz Tałanda (University of Warsaw and UCL) said: ‘This little fossil lets us see evolution in action. In palaeontology you rarely have the opportunity to work with such complete, well-preserved fossils coming from a time about which we know so little.’

The fossil was found in 2016 by a team led by Oxford University and National Museums Scotland. It is one of several new fossil discoveries from the island, including early amphibians and mammals, which are revealing evolution of important animal groups that persist to the present day.

Dr Tałanda commented: ‘Bellairsia has some modern lizard features, like traits related to cranial kinesis – that’s the movement of the skull bones in relation to one another. This is an important functional feature of many living squamates.’

Co-author Dr Elsa Panciroli (Oxford University Museum of Natural History and National Museums Scotland) who discovered the fossil, said: ‘It was one of the first fossils I found when I began working on Skye. The little black skull was poking out from the pale limestone, but it was so small I was lucky to spot it. Looking closer I saw the tiny teeth, and realised I’d found something important, but we had no idea until later that almost the whole skeleton was in there.’

Squamates are the living group that includes lizards and snakes, and comprises more than 10,000 species today, making them one of the most species-rich living vertebrate animal groups. They include animals as diverse as snakes, chameleons, and geckos, found around the world. The group is characterised by numerous specialised features of the skull and rest of the skeleton.

Although we know the earliest origins of squamates lie 240 million years ago in the Triassic, a lack of fossils from the Triassic and Jurassic has made their early evolution and anatomy difficult to trace.

Analysing the new fossil alongside living and extinct fossil squamates confirms Bellairsia belongs to the ‘stem’ of the squamate family tree. This means that it split from other lizards just before the origin of modern groups. The research also supports the finding that geckos are a very early branching lineage, and that the enigmatic fossil Oculudentavis, previously suggested to be a dinosaur, is also a stem squamate.

To study the specimen, the team used X-ray computed tomography (CT) which, like medical CT, allows for non-invasive 3D imaging. This allowed the researchers to image the entire fossil, even though most of the specimen is still hidden by surrounding rock. Whereas medical scanners work at the millimetre scale, the Oxford University CT scanner revealed details down to a few tens of micrometres.

Parts of the skeleton were then imaged in even greater detail, including the skull, hindlimbs and pelvis, at the European Synchrotron (ESRF, Grenoble, France). The intensity of the synchrotron beam permits a resolution of 4 micrometres, revealing details of the smallest bones in the skeleton.

Co-author Professor Roger Benson (Department of Earth Sciences, University of Oxford), said: ‘Fossils like this Bellairsia specimen have huge value in filling gaps in our understanding of evolution and the history of life on Earth. It used to be almost impossible to study such tiny fossils like this, but this study shows the power of new techniques including CT scanning to image these non-destructively and in great detail.’

Co-author Professor Susan Evans (UCL), who first described and named Bellairsia from a few jaw and skull bones from Oxfordshire 25 years ago, added: ‘It is wonderful to have a complete specimen of this tantalising little lizard, and to see where it fits in the evolutionary tree. Through fossils like Bellairsia we are gaining a better understanding of early lizard anatomy. Angus Bellairs, the lizard embryologist after which Bellairsia was originally named, would have been delighted.’

Funding was provided by the Ministry of Science and Higher Education, Poland. The John Muir Trust provided access to the Elgol Coast Site of Special Scientific Interest, and NatureScot granted permits for fossil collection.

For more information or to speak to the researchers involved, please contact:

UCL is a diverse global community of world-class academics, students, industry links, external partners, and alumni. Our powerful collective of individuals and institutions work together to explore new possibilities.

Since 1826, we have championed independent thought by attracting and nurturing the world’s best minds. Our community of more than 43,800 students from 150 countries and over 14,300 staff pursues academic excellence, breaks boundaries and makes a positive impact on real world problems.

We are consistently ranked among the top 10 universities in the world and are one of only a handful of institutions rated as having the strongest academic reputation and the broadest research impact.

We have a progressive and integrated approach to our teaching and research – championing innovation, creativity and cross-disciplinary working. We teach our students how to think, not what to think, and see them as partners, collaborators and contributors.

For almost 200 years, we are proud to have opened higher education to students from a wide range of backgrounds and to change the way we create and share knowledge.

We were the first in England to welcome women to university education and that courageous attitude and disruptive spirit is still alive today. We are UCL.

www.ucl.ac.uk | Follow @uclnews on Twitter | Read news at www.ucl.ac.uk/news/ | Listen to UCL podcasts on SoundCloud | Find out what’s on at UCL Minds

About the Natural History Museum

The Natural History Museum is both a world-leading science research centre and the most-visited indoor attraction in the UK last year. With a vision of a future in which both people and the planet thrive, it is uniquely positioned to be a powerful champion for balancing humanity’s needs with those of the natural world. It is custodian of one of the world’s most important scientific collections comprising over 80 million specimens accessed by researchers from all over the world both in person and via over 30 billion digital data downloads to date. The Museum’s 350 scientists are finding solutions to the planetary emergency from biodiversity loss through to the sustainable extraction of natural resources. The Museum uses its global reach and influence to meet its mission to create advocates for the planet – to inform, inspire and empower everyone to make a difference for nature. We welcome millions of visitors through our doors each year, our website has had 17 million visits in the last year and our touring exhibitions have been seen by around 20 million people in the last 10 years.