Nano-catalysis provides many opportunities for chemical transformations, ranging from chemical manufacturing to energy conversion and storage. By far, mainly due to the recovery aspect, heterogeneous catalysis has received a significant research attention, with its application covering approximately 80% of all catalytic processes. 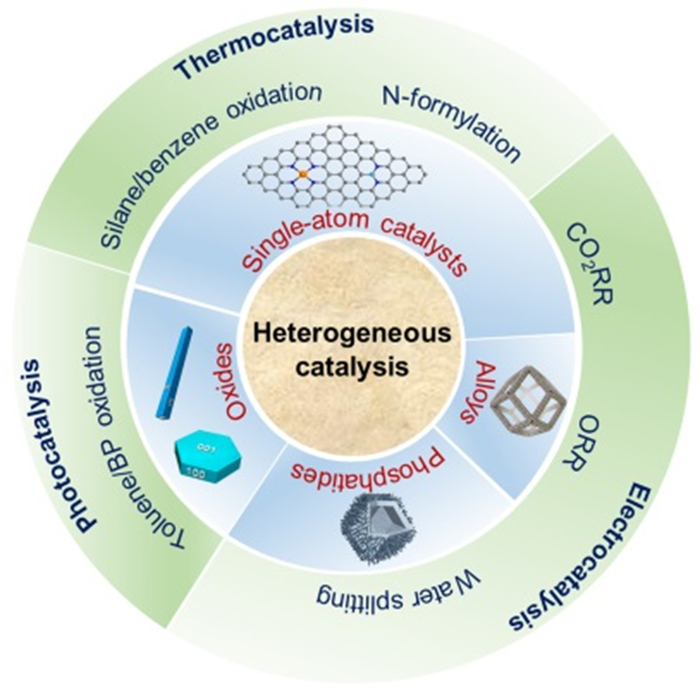 Nano-catalysis provides many opportunities for chemical transformations, ranging from chemical manufacturing to energy conversion and storage. By far, mainly due to the recovery aspect, heterogeneous catalysis has received a significant research attention, with its application covering approximately 80% of all catalytic processes.

In order to develop efficient nano-catalysts, it is of paramount importance to gain insights into the fundamental properties, such as the coordination structures of the active centers, element-doping-induced electronic effects and substrate−adsorbate interactions. However, owing to the limitation of the currently available characterization technologies and the diversity of active sites in heterogeneous nano-catalysts, the barrier hampering nano-catalysis has long existed because of the lack of an atomic level understanding of the mechanisms governing the catalytic processes. The nano-catalysis is faced with a major challenge to meet the needs of a sustainable society.

Over the last decade, modern catalysis has entered the golden era owing to the development of single-atom catalysts. With the characteristics of 100% dispersion and uniform active center, the single-atom catalysts offer advanced opportunities for exploring the catalytic performances of metals. More importantly, the studies of the interatomic interactions between the single metal atom and the surrounding environment would shed light on the catalytic process over the multi-atom sites in nano-catalysts.

Recently, a comprehensive account paper on the design of modern heterogeneous catalysts was published in Chinese Journal of Catalysis by a team led by Prof. Chen Chen from Tsinghua University, China. This account summarized their extensive investigation of the factors impacting nano-catalysis, along with the synthetic strategies developed to prepare innovative catalysts ranging from single-atom catalysts to nano-catalysts. The application of the catalysts covers electrocatalysis, photocatalysis and thermocatalysis. The lead author, Prof. Chen Chen said: “Our team has long been dedicated to investigating nano-catalysis and exploiting novel catalysts for chemical synthesis and energy conversion. We hope our studies will offer some useful guidelines for the researchers to achieve visible breakthroughs in catalysis science”.

Chinese Journal of Catalysis is co-sponsored by Dalian Institute of Chemical Physics, Chinese Academy of Sciences and Chinese Chemical Society, and it is currently published by Elsevier group. This monthly journal publishes in English timely contributions of original and rigorously reviewed manuscripts covering all areas of catalysis. The journal publishes Reviews, Accounts, Communications, Articles, Highlights, Perspectives, and Viewpoints of highly scientific values that help understanding and defining of new concepts in both fundamental issues and practical applications of catalysis. Chinese Journal of Catalysis ranks among the top six journals in Applied Chemistry with a current SCI impact factor of 8.271. The Editors-in-Chief are Profs. Can Li and Tao Zhang.