New revelations about an ancient fish: The secret to swimming upside down

When a South African fisherman came across a coelacanth in his net in 1938, it was like finding a living dinosaur – a catch that sent shockwaves throughout the scientific community. Until then, the coelacanth (SEE-lə-kanth) was believed to have been extinct for 66 million years. Since then, only about 300 specimens of this living fossil have been caught worldwide. In Denmark, a single fish, “specimen number 23”, has been submersed in alcohol at the Zoological Museum in Copenhagen for 60 years. 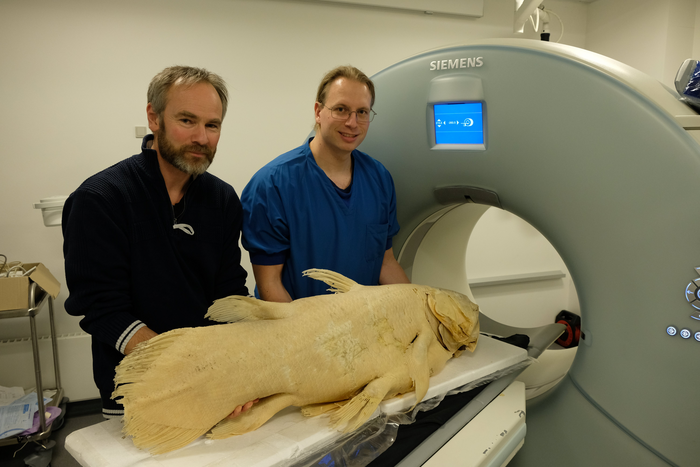 When a South African fisherman came across a coelacanth in his net in 1938, it was like finding a living dinosaur – a catch that sent shockwaves throughout the scientific community. Until then, the coelacanth (SEE-lə-kanth) was believed to have been extinct for 66 million years. Since then, only about 300 specimens of this living fossil have been caught worldwide. In Denmark, a single fish, “specimen number 23”, has been submersed in alcohol at the Zoological Museum in Copenhagen for 60 years.

As many other coelacanth specimens have been dissected, its anatomy is no secret. But very little is known about the fish’s physiology – the way it functions. Now, researchers from the University of Copenhagen and Aarhus University have discovered new things about this extraordinarily rare and elusive deep-sea dweller.

“This fish is iconic, extremely rare and remains shrouded in mystery. It is difficult to observe alive because it lives in underwater caves at depths of 150-200 meters. And, since a large portion of the few specimens collected over the years have been cut to pieces, new methods were required to find out more about how it lives. We now know a bit more,” says Peter Rask Møller, an associate professor and curator at the University of Copenhagen’s Natural History Museum of Denmark. He is a co-author of the research article published in the journal BMC Biology.

Along with Henrik Lauridsen of Aarhus University and a group of colleagues, Møller is the first person ever to conduct research on the Danish specimen, which has been preserved intact and only been used for display until now.

The secret to swimming upside down

By putting the fish in CT and MRI scanners at Aarhus University Hospital in Skejby, the research scientists could model the species with more precision than ever, while not destroying the fish. The models show the exact distribution of bone mineral and fat in its body. Among other things, the models help explain the unique “headstand drift hunting” technique of the coelacanth, whereby it slowly drifts along a seabed vertically, head and snout downwards, as it uses an electrosensitive organ to scan the bottom for cephalopods and fish to eat.

“We discovered that the coelacanth has a special skeleton with a lot of bone mass in the head and tail, while there are almost no vertebrae. It’s quite unique. The heaviest parts are at either end of the fish, which makes it easy for the fish to stand itself on its head. The balance point is an advantageous mechanism for its way of life,” explains Associate Professor Henrik Lauridsen from Aarhus University’s Department of Clinical Medicine.

The researchers also discovered the precise distribution of fatty tissue in the body of the fish, including the amount in its fatty bladder, as coelacanth don’t have a regular gas swim bladder like modern fish. The numbers show that the fat content correlates with the depths at which the fish live, where fat allows the fish to be neutrally buoyant and spend hardly any energy to remain hundreds of meters deep.

One peculiar feature about the coelacanth is that females gestate for a full five years before birthing live young. One of the great coelacanth mysteries among researchers is: Where do coelacanth give birth? The Danish researchers hope to shed light on this question soon.

“We still have no idea where their fry are born. By analyzing the distribution of bone and fat in a fetus, we can probably find out at what depth fry are adapted to live. This knowledge is also important in terms of preserving this critically endangered species – because when we don’t know where they are, we can’t know where to protect them. And, there is cause for concern. Coelacanth have an incredibly slow reproduction rate, which makes them extra vulnerable,” says Henrik Lauridsen.

The researchers point out that their models can be applied to all other aquatic organisms and used to determine, among other things, whether organisms are adapted to the ocean depths at which they live. This is relevant knowledge at a time when climate change could cause ocean currents to change and thereby impact marine life.

“Instead of going out and catching new coelacanth, which are both rare and protected, the modern scanning techniques have allowed us to perform exciting new analyses, despite the animal having been submersed in alcohol for decades. Having museum collections of rare animals is like entering the world’s best secondhand store, with the wildest array of recycled things that can no longer be found new,” concludes Peter Rask Møller.

STORY OF THE DANISH COELACANTH