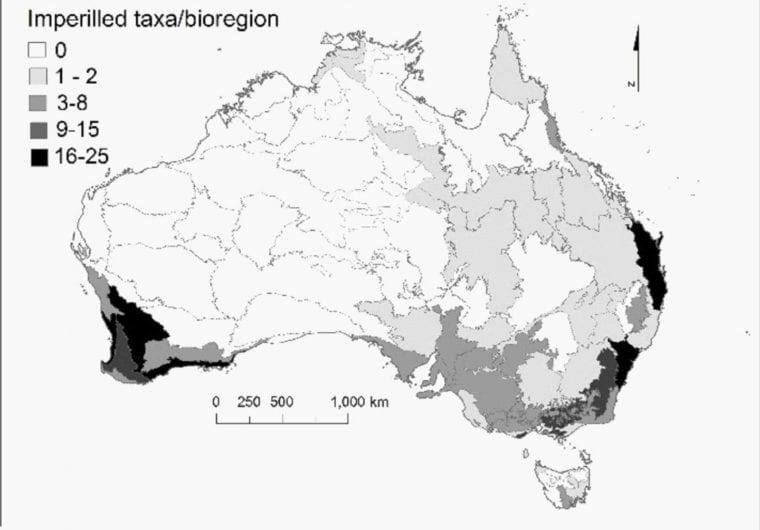 New research by the Threatened Species Recovery Hub has identified the top 100 Australian plant species at risk of extinction.

“Knowing which plants are at greatest risk gives us a chance to save them before it is too late,” said Dr Silcock.

“This list of Australia’s top 100 imperilled plants will help conservation managers prioritise where to direct efforts to prevent extinctions.

The research has just been published in the Australian Journal of Botany, and is based on a review of all available published information and interviews with 130 botanists from across Australia.

Ground orchids topped the chart, with 15 species making it on to the list.

According to co-researcher Dr Rod Fensham from the University of Queensland, the research team also identified the major threats driving species to extinction.

Urbanisation was the leading threat resulting in 22 species on the list, while 19 species are on the list due to inappropriate fire regimes.

“Many plants only remain in small isolated patches, which usually miss out on a lot of important natural processes like regular fires, meaning that fire-dependent species are not regenerating,” said Dr Fensham.

“Introduced plant diseases like phytophthora and myrtle rust are pushing 18 of the plants on the list towards extinction.

“We are still learning the best way to control these plant diseases. Research is underway and will be vital to minimising the impact of these diseases on Australia’s unique flora.”

Historic and ongoing habitat loss is the major threat to Australia’s plant species. Other threats increasing the risk of plant extinctions include grazing and trampling by livestock, native and feral animals like rabbits, climate change, weedy grasses and mining.

“The good news is that every one of the species on the list can be saved, we have the techniques required, we just need the commitment,” said Dr Fensham.

“Seventy-one of the species are already on the national list of threatened species, for the remaining species applying for formal conservation listing will be an important step in their protection.

“The fate of these species depends upon support and action from governments and the community.

“A bonus will be that the actions required to save these species will also benefit many other vulnerable plant species.”

Australia’s Threatened Species Commissioner Dr Sally Box said the research was important to ensure action was informed by the most up-to-date scientific evidence.

“Work is already underway for several species identified on the list, be it through targeted investment under the Threatened Species Strategy, or through the efforts of the Australian Seed Bank Partnership.”

“My office will continue to work with our partners and the Australian community to protect Australia’s unique native flora” said Dr Box.

The Threatened Species Recovery Hub is a partnership of ten Australian Universities and the Australian Wildlife Conservancy to undertake research to recover threatened species.

Treatment for obesity and fatty liver disease may be in reach

Smoothing wrinkles in mice — without needles

Researchers identify how vaginal microbiome can elicit resistance to…