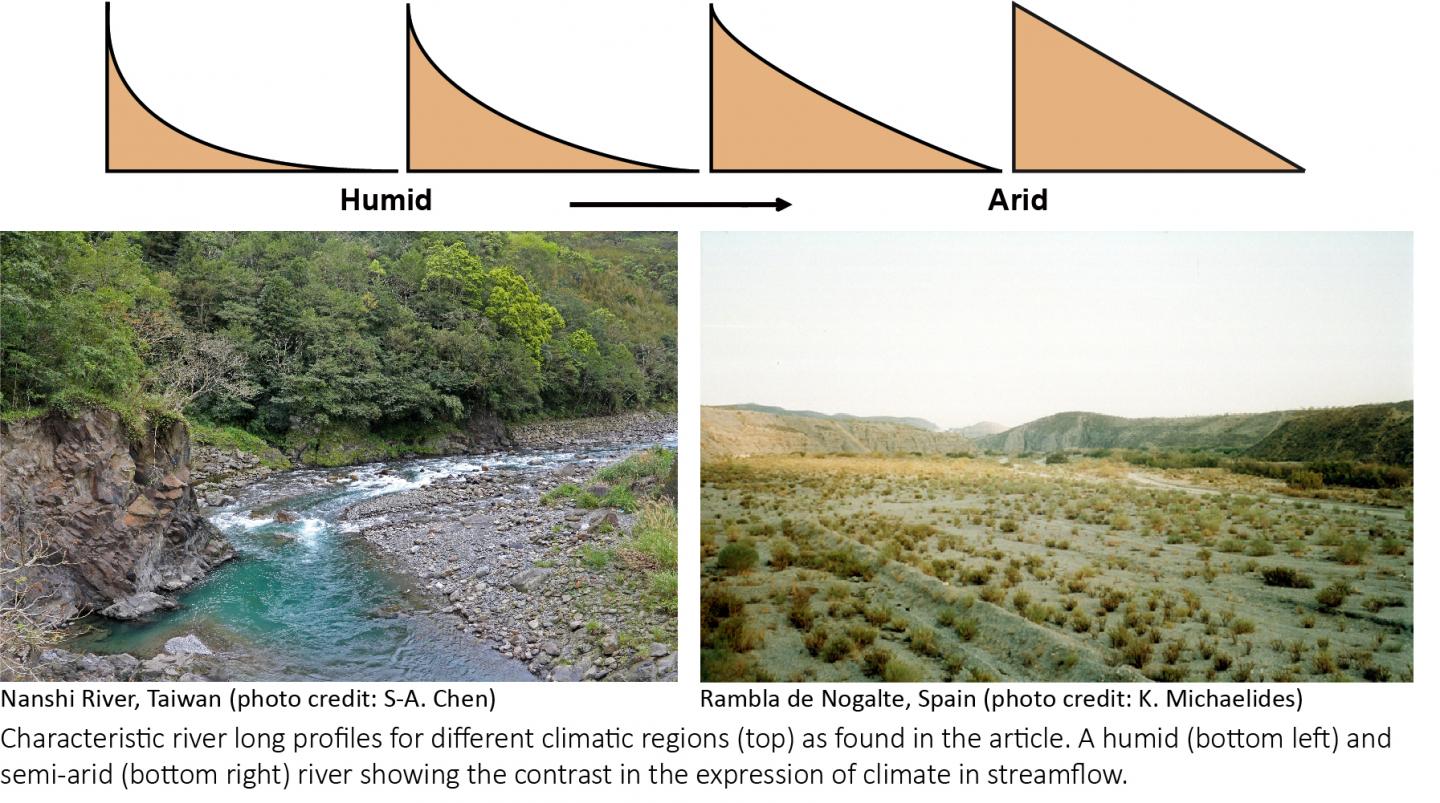 For decades geoscientists have been trying to detect the influence of climate on the formation of rivers, but up to now there has been no systematic evidence.

A new study, led by scientists from the University of Bristol and published today in the journal Nature, discovers a clear climatic signature on rivers globally that challenges existing theories.

If you walk from a river’s source to its mouth, you walk a path that descends in elevation. In some rivers, this path will descend steeply out of the uplands, and then flatten out in the lowlands. This results in an elevational profile (which we call the long profile) that has a concave up shape, similar to the shape of the inside of a bowl as you trace it from the inside rim to the bottom. In contrast, a straight long profile descends evenly in elevation, like a ramp, along the path as you walk from the source to the mouth.

The new research by Chen et al. shows that while river long profiles tend to be concave up in humid regions, they become progressively straighter in drier regions.

Lead author Shiuan-An Chen from the University of Bristol’s School of Geographical Sciences, said: “The long profile is formed gradually over tens of thousands to millions of years, so it tells a bigger story about the climate history of region. We would expect climate to affect the river long profile because it controls how much water flows in rivers and the associated force of water to move sediment along the riverbed.”

Up until now scientists have lacked a large, systematic dataset of rivers that spans the range of climate zones on Earth, enabling full exploration of the links between climate and river form. The research team produced a new, freely available, database of river long profiles, generated from data originally collected by NASA’s space shuttle. They used specialist software developed by co-author Dr Stuart Grieve at Queen Mary University of London to develop a new long profile database that includes over 330,000 rivers across the globe.

The study shows for the first time at the global scale that there are distinct differences in river long profile shapes across climate zones, and that the reason behind these differences lies in the expression of aridity in streamflow in rivers.

In humid regions, rivers tend to have flow in them all year round which continually moves sediment and erodes the overall profile into a concave up shape.

As the climate becomes progressively arid (from semi-arid, to arid, to hyper-arid), rivers only flow a few times per year when it rains, moving sediment infrequently.

Additionally, arid rivers tend to experience brief, intense rainstorms, which do not create flow over the entire river length.

These links between climate, streamflow and long profile shape are explained in the paper using a numerical model which simulates the evolution of river profiles over time in response to streamflow characteristics.

The authors show that regardless of all other potential controls on river profiles, streamflow characteristics have a dominant effect on the final profile shape. They demonstrate that the differences in the climatic expression of streamflow explain the variations in profile shape across climatic regions in their database.

“Traditional theory included in textbooks for decades describes that river long profiles evolve to be concave up. Existing theories are biased towards observations made in humid rivers, which are far better studied and more represented in published research than dryland rivers.

“Our study shows that many river profiles around the world are not concave up and that straighter profiles tend to be more common in arid environments.”

“I think dryland rivers have been understudied and under-appreciated, especially given that drylands cover ~40% of the global land surface. Their streamflow expression gives unique insights into the climatic influence on land surface topography.”

Dr Stuart Grieve from Queen Mary University of London said: “Combining satellite data with high performance computing is revolutionizing our discipline; allowing us to understand how our planet is changing at unprecedented scales. Our analysis of these data only scratches the surface of the potential that this fusion of data, computer power and geoscientific insight can offer us to understand our planet, as well as others in the solar system.”

For kids who face trauma, good neighbors or teachers can save their longterm health

Scienmag Dec 19, 2019
Danish researchers are world leaders in brain measurement via a special device fitted in the ear like a hearing…

How stable is deep ocean circulation in warmer climate?