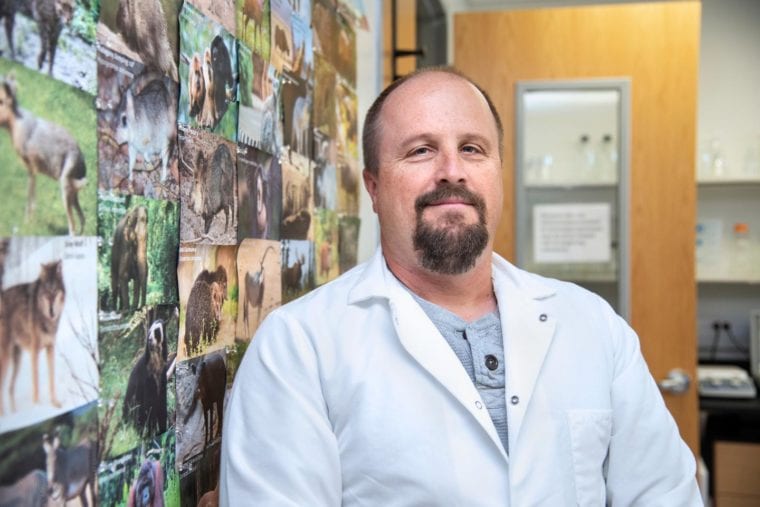 Tampa, FL (Jan. 29, 2019) – The 2014-16 Ebola virus epidemic that ravaged Western Africa, killing thousands, was the largest in history. An analysis of the epidemic found that not all individuals played an equal role in spreading the deadly infectious disease – just 3 percent of patients caused more than 60 percent of infections in other people. “Superspreaders” have also been implicated in other outbreaks, including severe acute respiratory syndrome (SARS) and Middle East respiratory syndrome (MERS).

Now, an international study led by a University of South Florida professor provides a new model to help identify and understand superspreaders and other forms of extreme competence, including less studied “superdiluters” that may protect individuals against infection risk. The research is published today in the journal Trends in Ecology and Evolution.

“The relationship between physiology and behavior in individual hosts determines the dynamics of how infectious disease emerges and spreads in the community,” said lead author Lynn Martin, PhD, a professor at the USF Health College of Public Health who studies disease ecology. “Individuals are not the same – and distinguishing how they differ within the context of host-parasite interactions is critical. This new framework might help us better target vaccinations, hygiene and other measures to those individuals most likely to influence the spread of infections during epidemics.”

Simple epidemiological models for infectious diseases have been unable to explain or predict the behavior of some outbreaks, often because they don’t account for variation in individual host competence. Competence represents the capacity for one human or animal host to cause new infections either in other hosts, or in vectors – biting insects and other carriers that can transmit viral, bacterial, and other infections. (For instance, Culex mosquitoes are the vectors that transmit West Nile and other viruses to humans.)

The model developed by Martin and his Australian colleagues elucidates various aspects of host competence that may increase or decrease the risk of effectively spreading disease. It breaks down host competence into four key stages – exposure to, susceptibility for, suitability for, and transmissibility of infectious organisms – and proposes that various combinations of these factors among individual hosts will determine how a disease circulates and evolves within a community.

For example, a single human genetic mutation, linked with increased ingestion of malaria parasites by white blood cells, might make some humans who are otherwise exceptionally susceptible to infection incapable of attaining a high enough volume of parasites in their circulating blood to transmit the parasites to mosquito vectors. Human hosts with this particular mutation may act as superdiluters, significantly weakening the risk of malaria in their communities. By contrast, human (or animal) hosts very attractive to malaria-infected mosquitos and also highly able to replicate parasites might act as superspreaders.

The interplay between host behavior and physiology in individual hosts is very important, Martin said. For instance, traditional funeral practices emphasizing washing and dressing a body that retains the blood, sweat and other bodily fluids of the Ebola virus prolonged West Africa’s deadly epidemic. Differences among individuals in these behaviors probably influenced that Ebola epidemic, Martin said. For several infections, research indicates that asymptomatic people who do not feel sick yet travel great distances or remain socially active in their communities may be more effective spreaders of infections than infected individuals who stay home because they feel lethargic and sick.

In a second paper published the same day in Trends in Parasitology. Dr. Martin (senior author) and co-investigators used the new framework to investigate how host body size effects on competence might influence disease risk for others. The researchers revealed that large species appear to be disproportionately better at generating infections like West Nile virus and Lyme disease than smaller species based on how effects of body size on host traits combine to impact competence. However, they emphasized that the lower population density of large hosts may sometimes diminish amplifying effects of body size on disease risk.

USF Health is the partnership of the USF Health Morsani College of Medicine, the College of Nursing, the College of Public Health, the College of Pharmacy, the School of Physical Therapy and Rehabilitation Sciences, the Biomedical Sciences Graduate and Postdoctoral Programs, and the physicians of USF Health, the largest multispecialty group practice on Florida’s west coast. The University of South Florida, established in 1956 and located in Tampa, is a high-impact, global research university dedicated to student success. USF ranks in the top 25 nationally for research expenditures among public universities, according to the National Science Foundation. In 2018, the Florida Board of Governors designated USF as a Preeminent State Research University, placing USF in the most elite category among the state’s 12 public universities.

Newly developed mathematical model could be used to predict cancer…

New neutron detector can fit in your pocket