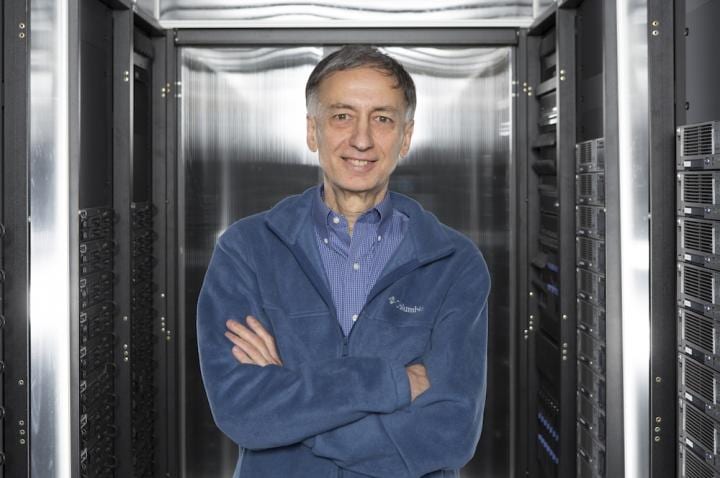 BINGHAMTON, NY – Semiconductor Research Corp. (SRC) recently chose a team of researchers from Binghamton University and Purdue University to lead a new multimillion dollar research center. The Center for Heterogeneous Integration Research in Packaging, or CHIRP, will help to define the future of electronics packaging in the United States and globally for the next decade.

Moore’s Law — the observation that the number of transistors in an integrated circuit doubles about every two years — held steady for 50 years. Due to increased integration, along the way, consumers became accustomed to steady reductions in the cost of computing. That trend cannot continue without some significant changes in thinking; transistors simply can’t get much smaller than they already are.

That’s where CHIRP comes in.

Bahgat Sammakia, vice president for research and a distinguished professor of mechanical engineering at Binghamton, developed the winning proposal with Kanad Ghose, professor of computer science at Binghamton, and Ganesh Subbarayan, professor of mechanical engineering at Purdue. Sammakia and Subbarayan will serve as co-directors of the center, whose research will address issues in global interconnects, efficient power delivery, system design, thermal management, novel materials, reliability and other topics.

Heterogeneous integration of many microchips into single packages will be essential to technology ranging from cell phones to mainframe computers for at least the next decade, Sammakia said.

“Anywhere you have chips that benefit from small transistors, we’re heading toward heterogeneous integration,” he explained. “It’s really the only solution available for the next five to 10 years. There’s an increasing challenge to shrink transistors much further. Other approaches, like quantum computing, are at least a decade away.”

Binghamton and Purdue have a history of collaboration that stretches back nearly two decades. Roughly a dozen faculty members in engineering and computer science at the two institutions will participate in the center’s research. The center expects to expand in faculty participation as SRC initiates additional projects.
“For more than 50 years, transistor scaling has enabled advancements in computing, mobile devices, automotive and medical electronics, while reducing the cost per transistor,” Subbarayan said. “However, as we approach the limits of Moore’s Law promise of doubling transistor performance and energy efficiency by shrinking feature size, we must look in new directions for continued gains.”

Semiconductor Research Corp., a world-class technology research consortium, promotes collaborations among academic institutions, technology companies and government agencies. It will provide $1.8 million to the center in the first four years; another $1.8 million will come from the campuses, the State University of New York and other sources.

Kwok Ng, senior director at SRC, said he’s excited to partner with the Purdue-Binghamton team. “They have a successful track record of working with the semiconductor industry,” he said. “CHIRP will capitalize on this heritage and will partner with SRC to address industry needs.”

CHIRP will enable the Binghamton and Purdue researchers to expand their existing work, much of which has been federally funded, into products and applications.

The founding members of SRC’s CHIRP are ARM, IBM, Intel, NXP, Texas Instruments and Samsung, which will guide the research at Binghamton and Purdue.

How a one-hour ‘planting party’ lifts spirits, builds skills among women in prison