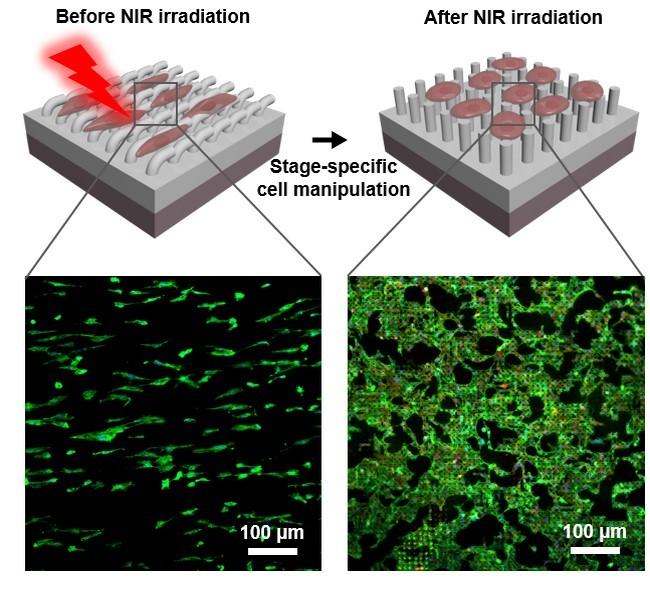 According to the World Health Organization, cardiovascular (CV) disease has become the leading cause of death worldwide. However, vascular regeneration is a promising treatment for cardiovascular disease. Remodeling the endothelium – i.e., forming a confluent vascular endothelial cell monolayer on the lumen – plays a vital role in this process.

A joint research group led by Dr. DU Xuemin at the Shenzhen Institutes of Advanced Technology (SIAT) of the Chinese Academy of Sciences recently demonstrated a remote-controlled “smart” platform that effectively directs programmed vascular endothelium remodeling in a temporally controllable manner. The study was published in National Science Review [2019].

Upon 10 s of near-infrared (NIR) irradiation, the heat generated on the bottom layer induced the surface topographies of the platform to change from their original anisotropic microgroove array to a permanent isotropic micropillar array.

“Traditionally, biomaterials and tissue engineering scaffolds offer suitable platforms to support cell attachment and ingrowth. We aim to develop biomaterials with dynamic properties to actively modulate different cell functions in specific spatiotemporal manners, just like the native ECM in our bodies. We believe biomaterials with dynamic properties will contribute to the progress of wound healing and complex tissue/organ regeneration,” said Dr. DU Xuemin from SIAT.

The mystery of touch and how we feel about it

Necrophagy: A means of survival in the Dead Sea