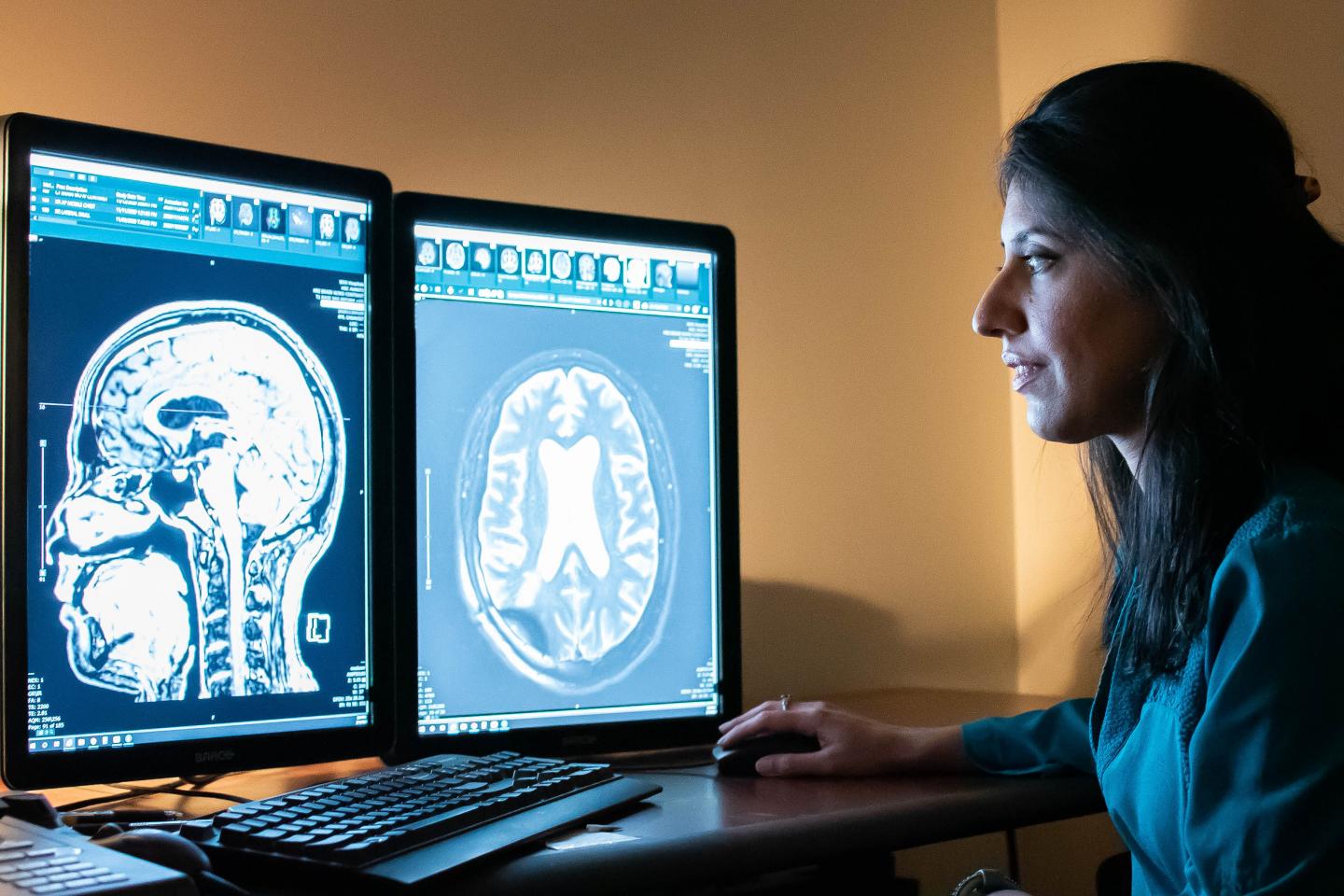 West Virginia University scientists used MRI scans to show what happens when ultrasound waves target a specific area of Alzheimer’s patient’s brains. They concluded that this treatment may induce an immunological healing response, a potential breakthrough for a disease that accounts for up to 80% of all dementia cases.

Rashi Mehta, a researcher with the WVU School of Medicine and Rockefeller Neuroscience Institute, led the study that appears in the journal Radiology.

“Focused ultrasound is an innovative technique and new way of approaching brain diseases, including Alzheimer’s disease,” said Mehta, an associate professor in the Departments of Radiology, Neuroscience and Neuroradiology. “Novel techniques are needed for Alzheimer’s disease since traditional approaches have not proven effective.”

In 2018, WVU launched a first-of-its-kind clinical trial to explore the use of focused ultrasound to open the blood-brain barrier in early-stage Alzheimer’s patients.

“The blood-brain barrier has long presented a challenge in treating the most pressing neurological disorders,” said Ali Rezai, the executive chair of RNI and principal investigator of the clinical trial. “The ability to noninvasively and reversibly open the blood-brain barrier in deep brain areas, such as the hippocampus, offers a new potential in developing treatments for Alzheimer’s disease.”

The ultrasound targeted the hippocampus in particular because it plays a large role in learning and memory.

Mehta used MRI with contrast-enhancement dye to observe the changes that took place in the brains of three early-stage Alzheimer’s patients–ages 61, 72 and 73–who underwent the ultrasound treatment.

She observed that the dye moved along the course of draining veins following the procedure.

“This imaging pattern was unexpected and enhances our understanding of brain physiology,” she said. “The glymphatic system, which is a fluid-movement and waste-clearance system that’s unique to the brain, has been studied in animals, but there is controversy about whether this system truly exists in humans. The imaging pattern that we discuss in the paper offers evidence not only to support that the system does likely exist in humans but that focused ultrasound may modulate fluid movement patterns and immunological responses along this system.”

Mehta and her colleagues’ analysis of the MRI scans suggests that an immunological healing response may occur around the draining veins following the procedure.

“This observation may be an important clue in understanding the physiological mechanism by which the focused ultrasound procedure modifies brain amyloid levels and might be used to treat patients with Alzheimer’s disease and other brain disorders,” she said.

Why are amyloid levels important? Unusually high amounts of this protein tend to clump together in the brains of Alzheimer’s patients, forming plaques between nerve cells and sabotaging their function. The ongoing clinical trial aims to assess whether focused ultrasound can reduce amyloid plaques in patients with Alzheimer’s disease.

This project did not involve any medications. The ultrasound itself was enough to elicit a probable immunological response. In the future, however, the treatment may make it easier to medicate the brain with more precision, even in people who don’t have Alzheimer’s disease.

“The blood brain barrier limits our ability to deliver drugs and therapeutic agents directly to the brain,” Mehta said. “Therefore, opening this barrier in patients would allow focal delivery of medications in select brain regions targeted by the procedure.”

The clinical trial–sponsored by INSIGHTEC, the manufacturer of the ultrasound device–continues.

As Mehta and her team enroll more participants, they plan to examine the treatment’s long-term effects. They want to know whether it is safe and effective for slowing–or even reversing–the progression of Alzheimer’s dementia.

So far, the results are promising. The treatment has not harmed any of the participants who have completed it.

“We are thankful to the patients who have volunteered for this trial,” Mehta said. “They are brave to undergo this procedure, which if proven effective may benefit patients with Alzheimer’s disease in the future.”

Alzheimer’s disease is the nation’s most common form of dementia, and it’s on the rise. The Alzheimer’s Association reports that 5.8 million Americans age 65 and older had Alzheimer’s dementia in 2020. By 2050, that number could rise to 13.8 million.

The focused ultrasound team at RNI is committed to improving the lives of patients with Alzheimer’s disease by pioneering advances using a truly integrated approach and the latest technologies.