DALLAS (SMU) – With wings spanning nearly 16 feet, a new species of pterosaurs has been identified from the Atlantic coast of Angola. 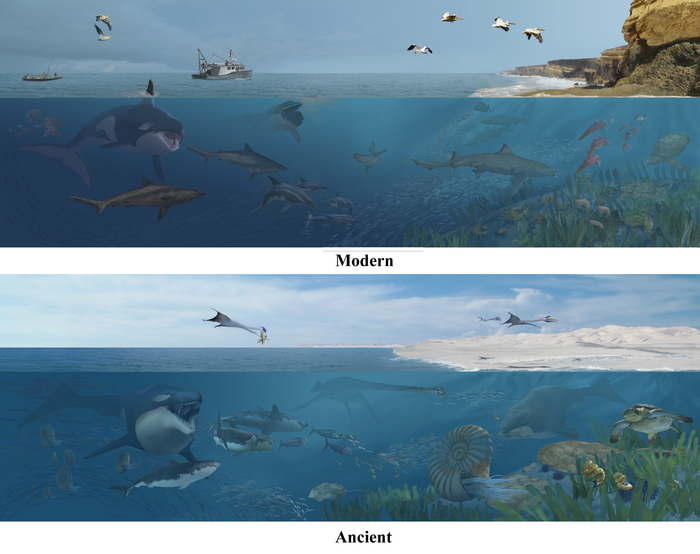 DALLAS (SMU) – With wings spanning nearly 16 feet, a new species of pterosaurs has been identified from the Atlantic coast of Angola.

An international team, including two vertebrate paleontologists from SMU, named the new genus and species Epapatelo otyikokolo. This flying reptile of the dinosaur age was found in the same region of Angola as fossils from large marine animals currently on display at the Smithsonian’s National Museum of Natural History.

“This new discovery gives us a much better understanding of the ecological role of the creatures that were flying above the waves of Bentiaba, on the west coast of Africa, approximately 71.5 million years ago,” Polcyn said.

Renowned paleontologist Louis L. Jacobs, SMU professor emeritus of earth sciences and president of ISEM, an interdisciplinary institute at the university, also collaborated on the research. The team’s findings were published in the journal Diversity.

Epapatelo otyikokolo is believed to have been a fish-eating pterosaur that behaved similarly to large modern-day seabirds.

“They likely spent time flying above open-water environments and diving to feed, like gannets and brown pelicans do today,” Jacobs said. “Epapatelo otyikokolo was not a small animal, and its wingspan was approximately 4.8 m, or nearly 16 feet.”

But fossils discovered since the study suggest that some of the newly identified pterosaur species could have been even larger creatures, Polcyn said. Pterosaurs were impressive creatures, with some of the largest species having wingspans of nearly 35 feet.

The genus name ‘Epapatelo’ is the translation of the word from the Angolan Nhaneca dialect meaning “wing”, and the species name “otyikokolo” is the translation of ‘lizard.’ The Nhaneca or Nyaneka people are an Indigenous group from Angola’s Namibe Province, the region where the fossils were found.

The lead author of the study was Alexandra E. Fernandes, of Museu da Lourinhã, Universidade NOVA de Lisboa and The Bavarian State Collection for Paleontology and Geology. Other co-authors include Octávio Mateus of Universidade NOVA de Lisboa and Museu da Lourinhã; Brian Andres of the University of Sheffield; Anne S. Schulp of the Naturalis Biodiversity Center and Utrecht University in the Netherlands; and Antonio Olímpio Gonçalves of the Universidade Agostinho Neto in Angola.

Jacobs and Polcyn forged the Projecto PaleoAngola partnership with collaborators in Angola, Portugal, and the Netherlands to explore and excavate Angola’s rich fossil history, and began laying the groundwork for returning the fossils to the West African nation. Back in Dallas, Jacobs, Polcyn, and research associate Diana Vineyard went to work over a period of 13 years with a small army of SMU students to prepare the fossils excavated by Projecto PaleoAngola.

This international team discovered and collected the fourteen bones from Epapatelo otyikokolo in Bentiaba, Angola, starting in 2005. Bentiaba is located on a section of Angola coastline that Jacobs has called a “museum in the ground” because so many fossils have been found in the rocks there.

Many of those fossils are currently on display at the Smithsonian’s National Museum of Natural History “Sea Monsters Unearthed” exhibit, which was co-produced with SMU. It features large marine reptiles from the Cretaceous Period — mosasaurs, turtles, and plesiosaurs.

SMU is the nationally ranked global research university in the dynamic city of Dallas. SMU’s alumni, faculty and nearly 12,000 students in eight degree-granting schools demonstrate an entrepreneurial spirit as they lead change in their professions, communities and the world.

Pterosaurs from the Late Cretaceous of Angola