Invention could solve waste management challenges on the battlefield 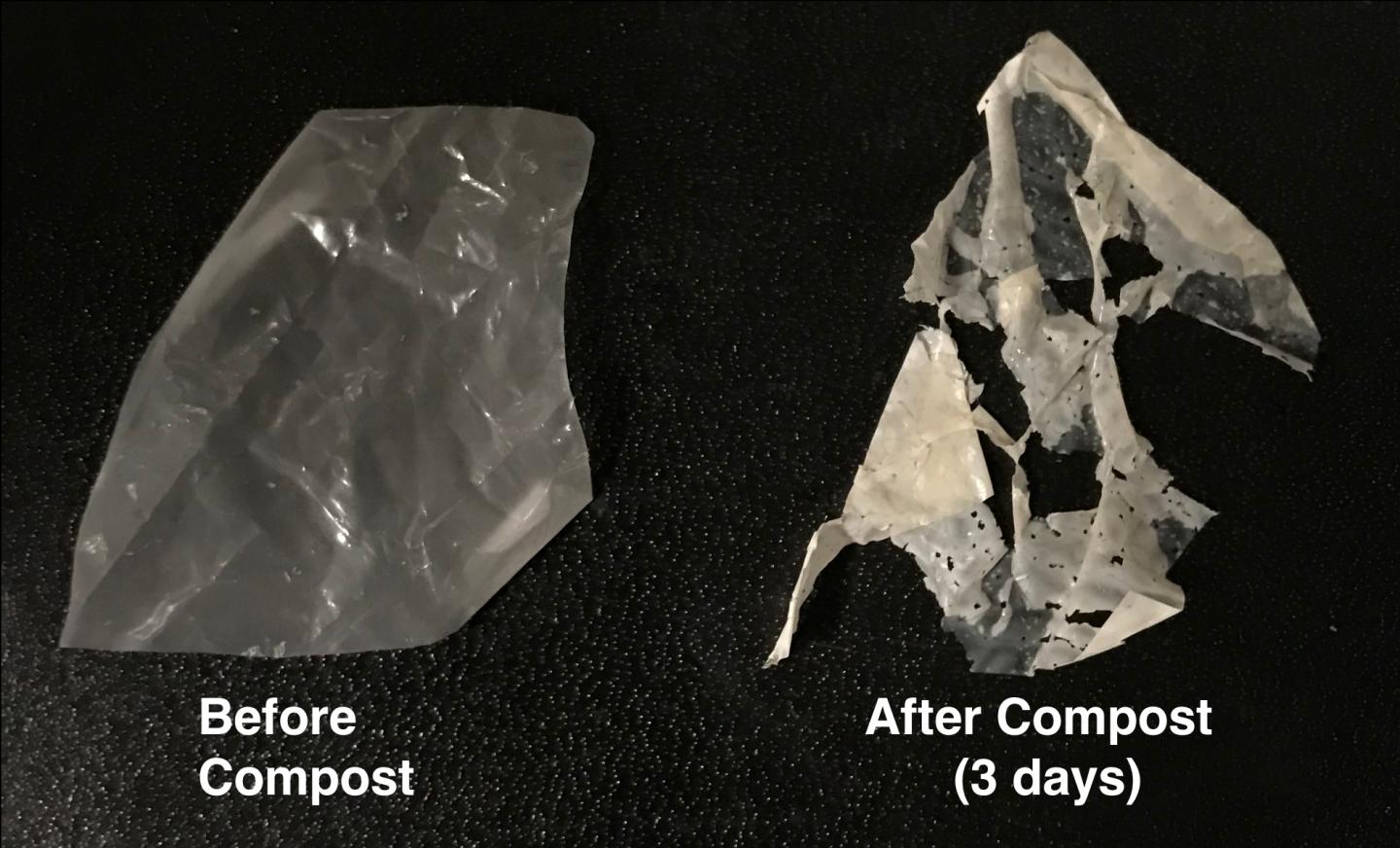 The new process, developed by researchers at University of California, Berkeley and the University of Massachusetts Amherst, involves embedding polyester-eating enzymes in the plastic as it’s made.

When exposed to heat and water, an enzyme shrugs off its polymer shroud and starts chomping the plastic polymer into its building blocks — in the case of biodegradable plastics, which are made primarily of the polyester known as polylactic acid, or PLA, it reduces it to lactic acid that can feed the soil microbes in compost. The polymer wrapping also degrades.

The process, published in Nature, eliminates microplastics, a byproduct of many chemical degradation processes and a pollutant in its own right. Up to 98% of the plastic made using this technique degrades into small molecules.

“These results provide a foundation for the rational design of polymeric materials that could degrade over relatively short timescales, which could provide significant advantages for Army logistics related to waste management,” said Dr. Stephanie McElhinny, program manager, Army Research Office, an element of the U.S. Army Combat Capabilities Development Command, known as DEVCOM, Army Research Laboratory. “More broadly, these results provide insight into strategies for the incorporation of active biomolecules into solid-state materials, which could have implications for a variety of future Army capabilities including sensing, decontamination, and self-healing materials.”

The new process to break down compostable plastics involves embedding polyester-eating enzymes in the plastic as it’s made. When exposed to heat and water, the enzyme shrugs off its polymer shroud and starts chomping the plastic polymer into its building blocks — in the case of PLA, reducing it to lactic acid, which can feed the soil microbes in compost.

Plastics are designed not to break down during normal use, but that also means they don’t break down after they’re discarded. Compostable plastics can take years to break down, often lasting as long as traditional plastics.

The research teams embedded nanoscale polymer-eating enzymes directly in a plastic or other material in a way that sequesters and protected them until the right conditions to unleash them. In 2018, they showed how this works in practice. The team embedded in a fiber mat an enzyme that degrades toxic organophosphate chemicals, like those in insecticides and chemical warfare agents. When the mat was immersed in the chemical, the embedded enzyme broke down the organophosphate.

The researchers said protecting the enzyme from falling apart, which proteins typically do outside of their normal environment, such as a living cell, resulted in the key innovation.

For the Nature paper, the researchers showcased a similar technique by enshrouding the enzyme in molecules they designed called random heteropolymers or RHPs, and embedding billions of these nanoparticles throughout plastic resin beads that are the starting point for all plastic manufacturing. The process is similar to embedding pigments in plastic to color them.

“This work, combined with the 2018 discovery, reveals these RHPs as highly effective enzyme stabilizers, enabling the retention of enzyme structure and activity in non-biological environments,” said Dr. Dawanne Poree, program manager, ARO. “This research really opens the door to a new class of biotic-abiotic hybrid materials with functions only currently found in living systems.”

Much of the planet is swimming in discarded plastic, which is harming animal and possibly human health. Can it be cleaned up?

The results showed that the RHP-shrouded enzymes did not change the character of the plastic, which could be melted and extruded into fibers like normal polyester plastic at temperatures around 170 degrees Celsius (338 degrees Fahrenheit).

To trigger degradation, it was necessary only to add water and a little heat. At room temperature, 80% of the modified PLA fibers degraded entirely within about one week. Degradation was faster at higher temperatures. Under industrial composting conditions, the modified PLA degraded within six days at 50 degrees Celsius (122 degrees Fahrenheit).

Another polyester plastic, PCL (polycaprolactone), degraded in two days under industrial composting conditions at 40 degrees Celsius (104 degrees Fahrenheit). For PLA, the team embedded an enzyme called proteinase K that chews PLA up into molecules of lactic acid; for PCL, they used lipase. Both are inexpensive and readily available enzymes.

“If you have the enzyme only on the surface of the plastic, it would just etch down very slowly,” said Ting Xu, UC Berkeley professor of materials science and engineering and of chemistry. “You want it distributed nanoscopically everywhere so that, essentially, each of them just needs to eat away their polymer neighbors, and then the whole material disintegrates.”

Xu suspects that higher temperatures make the enshrouded enzyme move around more, allowing it to more quickly find the end of a polymer chain and chew it up and then move on to the next chain. The RHP-wrapped enzymes also tend to bind near the ends of polymer chains, keeping the enzymes near their targets.

The modified polyesters do not degrade at lower temperatures or during brief periods of dampness. For instance, a polyester shirt made with this process would withstand sweat and washing at moderate temperatures.

Soaking the biodegradable plastic in water for three months at room temperature did not cause it to degrade, but soaking for that time period in lukewarm water did.

Xu is developing RHP-wrapped enzymes that can degrade other types of polyester plastic, but she also is modifying the RHPs so that the degradation can be programmed to stop at a specified point and not completely destroy the material. This might be useful if the plastic were to be re-melted and turned into new plastic.

“Imagine, using biodegradable glue to assemble computer circuits or even entire phones or electronics, then, when you’re done with them, dissolving the glue so that the devices fall apart and all the pieces can be reused,” Xu said.

This technology could be very useful for generating new materials in forward operating environments, Poree said.

“Think of having a damaged equipment or vehicle parts that can be degraded and then re-made in the field, or even repurposed for a totally different use,” Poree said. “It also has potential impacts for expeditionary manufacturing.”

In addition to the Army, the U.S. Department of Energy with assistance from the UC Berkeley’s Bakar Fellowship program also funded the research.