When electrons flow through a conductor — such as the copper wires in our phone chargers or the silicon chips in the circuit boards of our laptops — they collide with material impurities and with each other in a tiny atomic frenzy. Their interaction with impurities is well known. 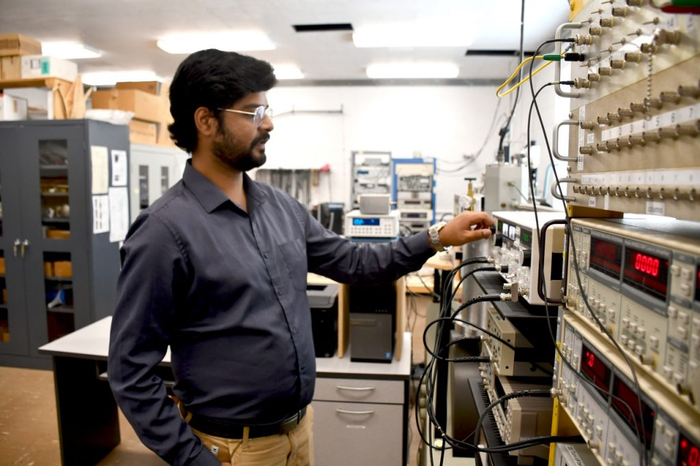 When electrons flow through a conductor — such as the copper wires in our phone chargers or the silicon chips in the circuit boards of our laptops — they collide with material impurities and with each other in a tiny atomic frenzy. Their interaction with impurities is well known.

Yet, while understanding how electrons interact with each other is fundamental to understanding the physics, measuring the strength of these interactions has proven to be a tricky challenge for physicists.

A team led by Virginia Tech researchers has discovered that by creating a specific set of conditions, they could quantify electron-electron interactions more precisely than ever. Their findings expand upon existing physics theories and can be applied to improving electronic devices and quantum computers. They recently published their findings in the journal Nature Communications.

To study how electrons interact together, the team fabricated tiny devices that would create a beam of electrons. They needed three specific conditions to get the results: low temperatures, a magnetic field to make the electrons whirl around in orbits, and ultrapure materials provided by collaborators at Purdue University. Their goal: to see how far electrons would travel on their orbits before they encounter other electrons and scatter. As the device was made from ultrapure materials, the team knew that there weren’t any other variables that could cause the scattering — they could witness the electrons interacting without any confounding variables.

However, this wasn’t the only surprise that the team encountered. Scientists have recently found that in certain materials and conditions, groups of electrons flow collectively and behave similar to a liquid. Using high-powered computers, project collaborators at Rensselaer Polytechnic Institute in Troy, New York, simulated how the group of electrons flowed. Their images revealed that the electrons flowed into vortices, like whirlpools — a behavior that has yet to be documented in the presence of a magnetic field.

“The whirlpools actually persist even if the interactions between electrons are very weak,” said Adbhut Gupta, the lead author of the study and a Ph.D. candidate in Heremans’ lab. “At this point, not much is known about this collective behavior in the weak interaction limit. It’s a new phenomenon, one that a single particle would not have shown. Ours is the first experiment to hint at this kind of collective behavior.”

Also working on the study was Gitansh Kataria, a graduate student in the Bradley Department of Electrical and Computer Engineering, part of the Virginia Tech College of Engineering.

The team’s discoveries could be critical in helping scientists rethink some of the most fundamental physics theories, such as Fermi liquid theory, which describes the normal state of metals at low temperatures.

“What we found is that those theories are obeyed but only proximately. We saw deviations from the theoretical expectations,” said Heremans. “That’s interesting because if everything is according to theory, why is there a need to do experiments to begin with? It’s not that we have to agree completely, but we have to understand what is missing from the theory.”

The outcomes of this study could be applied to help improve electronics, such as sensors and telecommunication devices, Heremans said. Plus, this research could help further the cutting-edge field of quantum computing, part of which relies on electron-electron interactions to form new quantum states. Understanding electron behavior will allow physicists to fully harness the power of electrons in new innovations and applications.