The new heroics of RNA in cell differentiation 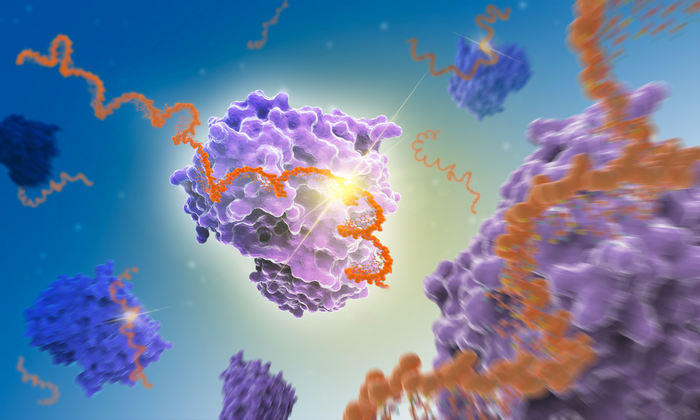 The new heroics of RNA in cell differentiation

Scientists are increasingly learning of new reasons to appreciate RNA, and the glycolytic enzyme ENO1 seems to have provided yet another in new research from European Molecular Biology Laboratory (EMBL) this week, as published in Molecular Cell.

With support from the MOLIT Institute and the Manfred Lautenschläger Foundation, researchers in the Hentze Group at EMBL Heidelberg used mouse embryonic stem cells to discover how messenger RNA molecules bind to and regulate ENO1, an enzyme that breaks down glucose to produce the cellular fuel ATP. This RNA-mediated regulation –  riboregulation – can determine how cells grow, and most importantly how undifferentiated cells (specifically embryonic stem cells) transform into specialised cells (e.g., blood, brain, or liver cells).

“Classically, people studying RNA-binding proteins have found that it’s the RNA-binding proteins that do something to RNA to change it during this process, but that’s not really what’s going on here,” said Ina Huppertz, a former postdoc in the Hentze Group and current scientific officer at the European Research Council. “As it turns out, it’s actually the other way around. The hero in this story is the RNA, not the enzymes.”

And while this may sound like a small distinction, this new perspective on riboregulation may represent a more widespread and meaningful principle of biological control.

“This may open up a new chapter of understanding unexpected aspects of controlling metabolism and cell differentiation. There’s every reason to think that this is a ‘tip of the iceberg study’,” said Matthias Hentze, EMBL Director and leader of this study. “The differentiation of undifferentiated cells and controlling that process is one step away from better understanding cancer.”

The researchers’ current work actually began at EMBL about 10 years ago. Hentze’s group developed a technology known as RNA interactome capture (RIC) and later an improved version – enhanced RIC (eRIC) –  to discover which proteins bind to RNA, including enzymes like ENO1.

“We felt we should take one of these very concrete examples – ENO1 – and actually pursue it deeply to understand what’s behind this RNA binding,” Hentze explained, noting how technologies developed at EMBL coupled with underlying methodologies developed elsewhere allowed them to now parse out RNA’s role in this process.

“The coolest new concept is how we now have the transcriptome of the whole cell regulating the enzyme,” Huppertz said. “I think we are just at the start. This is really just an example of unravelling the functional connection between these metabolic enzymes and RNA in mammalian cells. But I think we can build on that.”

Hentze too points out that this fundamental research provides many new lines of inquiry that his group will continue to pursue, as will Huppertz in a research group she will lead in the near future. This means answering questions like whether their findings bear out in other enzymes, if they have impacts on other stem cells beyond embryonic stem cells, and whether this protein-RNA interaction is something future drugs might be able to target in the case of cancer cells.

And answering these kinds of scientific questions will require continued intensive collaboration, which Hentze says includes EMBL colleagues and alumni, as well as working with the National Centre for Tumours and the University of Heidelberg’s medical faculty.

In sharing this research, surprises have not only come in the potential change to the way scientists think about RNA’s role in cell differentiation, but also the potential reach of this fundamental research finding.

“After giving a talk, I met a scientist studying Prochlorococcus, a marine cyanobacterium that is the most abundant photosynthetic organism on Earth,” Hentze recounts. “The scientist had reason to believe a lot of regulation happens at the RNA level but didn’t know which proteins in Prochlorococcus bind RNA. So, the technology we’ve developed to identify RNA-binding proteins in an unbiased way has now led to our newest collaboration to help look at RNA regulation in this organism that produces 20 % of the world’s oxygen.”

The authors declare the following competing interests: the European Molecular Biology Laboratory with the inventors M.W. Hentze and I. Huppertz applied for a patent (WO2022074066) on the use the ENO1-RNA interaction as a screening method for the identification of novel therapeutic compounds.