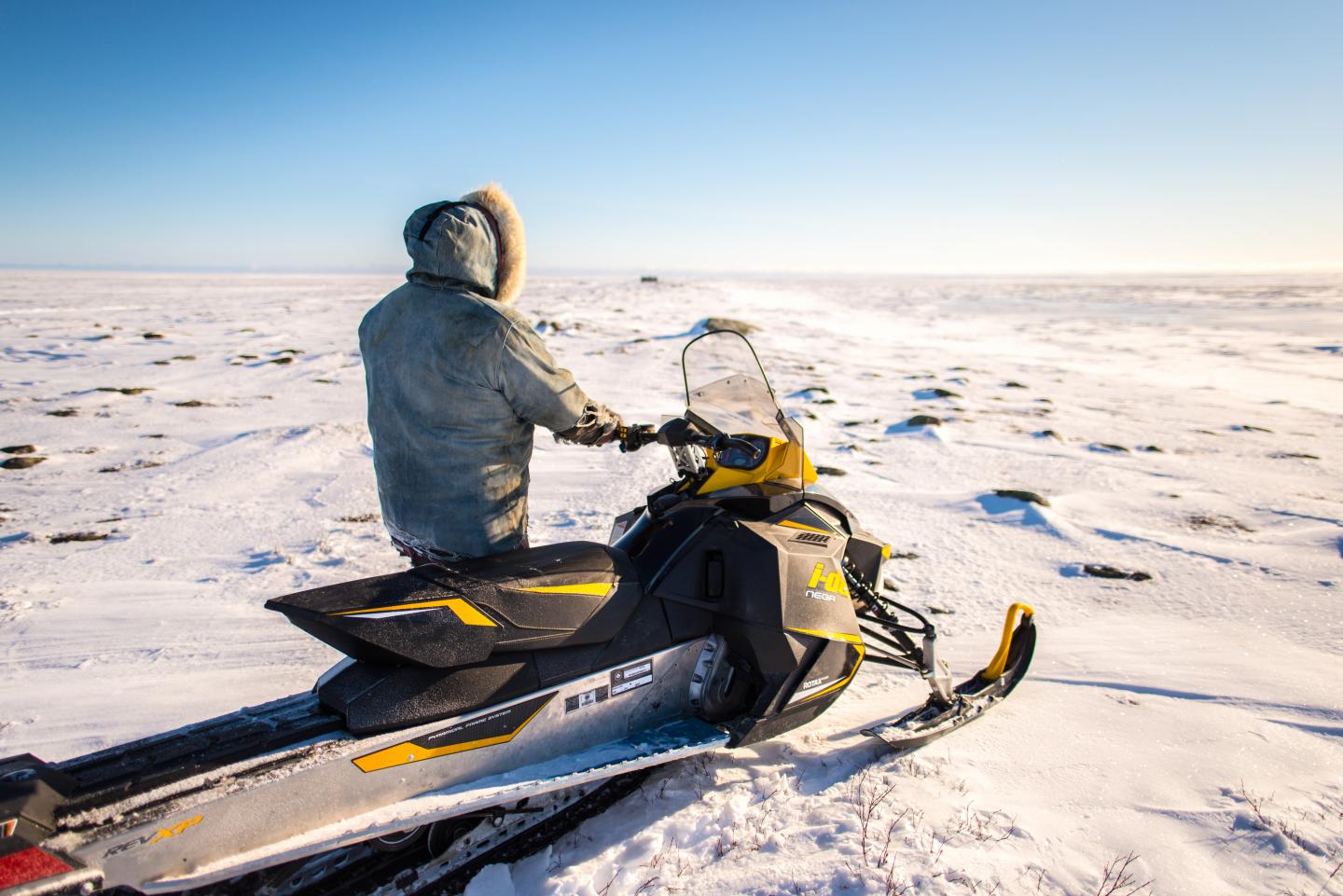 Inuit communities’ travel skills and regional knowledge have helped mitigate the effects of Arctic climate change on travel conditions, according to a new study.

The Arctic is warming nearly twice as quickly as the rest of the world and has the potential to affect many aspects of life for the people that live there. The semi-permanent trails used by Indigenous communities on sea-ice, rivers and frozen ground are vulnerable to warming conditions which can cause sea-ice melt and flooding.

These trails are critically important for travel between settlements, to cultural sites and for practicing traditional hunting, fishing and gathering activities. Until now, understanding whether climate change has affected the ability of Inuit to use these trails has been elusive, making it difficult for communities and regional and local governments to decide how to plan for climate impacts.

A study led by Professor James Ford, from the Priestley International Centre for Climate at the University of Leeds, used interviews with nine Inuit communities in the eastern Canadian Arctic to assess trail viability and compared this to 30 years’ worth of weather records to determine changes in travel conditions.

They found that despite significant changes in climate-related conditions between 1985-2016, including warming temperatures, overall trail access was affected much less than they expected.

The study, published in Nature Climate Change, suggests trail conditions have only changed by roughly one or two days in the last 30 years and that the combined number of suitable travel days per year for the three types of travel examined – over snow on land, over sea ice and on open water – has actually increased.

While changing ice conditions are reducing sea-ice trail access for using snowmobiles in the autumn and winter, improvements in visibility and wind appear to be offsetting this by enhancing both land and water trails in the spring and summer.

To assess trail access and viable travel days, the team, for the first time, took into account the skill level and risk tolerance among trail users to determine viable travel days. For example, ice concentration is critical for safely using small boats. Low or no ice concentrations are preferred by Inuit for boating. Accidents where boats have been sunk by ice strikes or occupants have been thrown overboard are more prevalent in high ice conditions.

Professor Ford, Chair in Climate Adaptation at the Priestley Centre, explained: “Previous studies on Arctic transportation and climate change do not take into consideration different types of trail users.

“We found that an understanding of how trail conditions are affected by changing conditions, as well as a knowledge of alternative routes, and a well-developed skillsets, such as being adept with snowmobile or recognising dangerous ice conditions, had a greater impact in determining whether trails were safe to use, more so than the change in travel conditions due to climate.

“Highly skilled travellers are able to use the trails more than twice as often as travellers whose skillsets are not as well-developed.

The study estimated that travellers of high skill can expect roughly 100 more days of suitable travel conditions per year compared to travellers with a lower skill set.

Professor Ford said: “While climate models can provide a bigger picture of the overall effects of climate change, it can be harder to determine how environmental variables are affecting specific activities within different communities in affected regions.

“The study highlights how the close involvement of the people in question is essential to understanding how the ongoing changes to the environmental will affect specific activities of different groups. Incorporating this practice, or a “bottom-up” approach, is central for understanding what climate change means for people and developing responses tailored to specific contexts.

“However, while the skill set of the Inuit community may be mitigating the effects of climate change on travel conditions for now, there is no doubt that the warming conditions in the Arctic are having detrimental effects on the region.

“The shrinking sea-ice and shifts in seasonal temperatures are a serious threat, particularly to the region’s native species and ecology which form an essential part of the Inuit community’s tradition and culture. And while the effects of climate change to date on trail access were not totally what we expected, communities are very concerned about what future change may mean.”

The Priestley International Centre for Climate, based at the University of Leeds, promotes interdisciplinary research of the highest standard on climate and its impact on nature and society. Building on the university’s outstanding reputation for climate research, the Centre represents a flagship investment of more than £10 million to address this global challenge. The Priestley International Centre for Climate delivers excellent research to underpin climate solutions with specific focus on four areas:

Follow us or tag us in to coverage: @priestleycentre

Founded in Montreal, Quebec, in 1821, McGill is a leading Canadian post-secondary institution. It has two campuses, 11 faculties, 13 professional schools, 300 programs of study and over 40,000 students, including more than 10,400 graduate students. McGill attracts students from over 150 countries around the world, its 12,500 international students making up 30% per cent of the student body. Over half of McGill students claim a first language other than English, including approximately 20% of our students who say French is their mother tongue.

The University of Ottawa–A crossroads of cultures and ideas

The University of Ottawa is home to over 50,000 students, faculty and staff, who live, work and study in both French and English. Our campus is a crossroads of cultures and ideas, where bold minds come together to inspire game-changing ideas. We are one of Canada’s top 10 research universities–our professors and researchers explore new approaches to today’s challenges. One of a handful of Canadian universities ranked among the top 200 in the world, we attract exceptional thinkers and welcome diverse perspectives from across the globe.

GlycoNet awards $1.45 million to eight projects to improve the health of Canadians