Burning of fossil fuels is one of the most common methods of generating energy. However, it has a detrimental impact on the environment. The use of hydrogen has been identified as an alternative energy generating source due to its proven efficiency as an energy carrier and low-carbon footprint in utilisation. However, high costs remain a major barrier to adopting green hydrogen on a large scale as a climate solution. 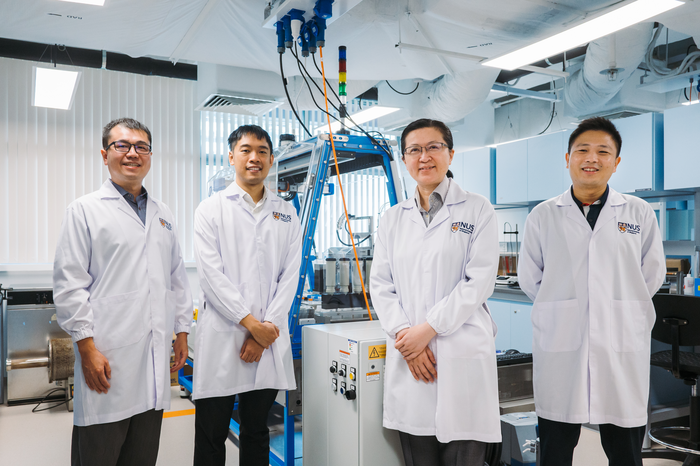 Burning of fossil fuels is one of the most common methods of generating energy. However, it has a detrimental impact on the environment. The use of hydrogen has been identified as an alternative energy generating source due to its proven efficiency as an energy carrier and low-carbon footprint in utilisation. However, high costs remain a major barrier to adopting green hydrogen on a large scale as a climate solution.

To address this challenge, the National University of Singapore (NUS) has established a new research institute, the Centre for Hydrogen Innovations (CHI), with the aim of creating breakthrough technologies to make hydrogen commercially viable as a green energy source. These capabilities will, in turn, help position Singapore as a game-changer in enabling a hydrogen economy – one that relies on hydrogen as one of the major commercial fuels to power Singapore’s energy needs. The new Centre has commenced operations on 1 July 2022.

CHI, the first of its kind in Southeast Asia, has received a S$15 million endowed gift from Temasek, and along with additional funding from NUS, the new centre has a total investment of S$25 million.

“The Centre for Hydrogen Innovations will conduct ground-breaking research on making green hydrogen affordable for Singapore. The Centre and the existing NUS Green Energy Programme, which focuses on carbon capture and utilisation, are both key to NUS’ strategy of offering world-class, innovative solutions to reduce our reliance on fossil fuels as a source of energy,” said Professor Ho Teck Hua, NUS Senior Deputy President and Provost.

Mr Russell Tham, Head of Strategic Development and Joint Head of Enterprise Development Group at Temasek, said, “Temasek supports efforts that catalyse solutions for a net zero world. We believe green hydrogen can play an important role in global decarbonisation. Hence, we are pleased to support CHI in their efforts to accelerate R&D breakthroughs and develop research talent for the hydrogen economy.”

A governance board, co-chaired by Prof Ho and Mr Tham, will provide strategic direction and stewardship for the new Centre. The governance board comprises leaders from the academic, government and corporate sectors in Singapore and overseas, including Mr David Danielson, Managing Director of Breakthrough Energy Ventures; Mr Bernd Heid, Senior Partner in McKinsey & Company and Global Lead for McKinsey’s Platform for Climate Technologies and Hydrogen Service Line; Professor Thomas Jaramillo, Director of SUNCAT Center for Interface Science and Catalysis at Stanford University; and Professor Can Li, Director of State Key Laboratory of Catalysis at Dalian Institute of Chemical Physics, Chinese Academy of Sciences.

Led by Professor Liu Bin, who also established the NUS Green Energy Programme, CHI will be taking a holistic approach to tackle technological and infrastructural challenges in enabling a hydrogen economy through harnessing a broad spectrum of expertise – such as science, engineering, social sciences and humanities – from various entities at NUS. In the first phase, its primary focus will be on hydrogen carrier and supply chain studies.

With limited solar and water resources, Singapore may need to import hydrogen from regional sources. CHI aims to conduct cost analysis and supply chain studies of imports to ensure cost-effectiveness and keep downstream commercial applications of hydrogen affordable. The Centre will also focus on developing technologies to ensure safe transport of hydrogen imports.

To safeguard national energy security in case of supply chain interruptions, the Centre will also explore innovative technologies for local production of hydrogen through processes such as electrolysis of water and methane pyrolysis powered by solar energy as a renewable energy source.

The Centre will also be working closely with industry partners to explore and accelerate applications for hydrogen as a fuel. Some of such applications include fuel cells for commercial use and transportation, or as a clean feedstock for the chemical industry. The Centre looks to establish local and global partnerships with key industry leaders.

Training programmes will be provided by the Centre through NUS to ensure sufficient expertise and trained personnel equipped with the skills and knowledge in the different components of a hydrogen economy. These programmes will include degree programmes, as well as short courses and certificates to target undergraduate, and postgraduate students, adult learners, policymakers, and industry leaders to help to develop a talent pool for enabling a hydrogen economy.

The Centre will also collaborate with the NUS community to work with policymakers and national agencies to develop effective safety regulations, risk assessments, and policies to enable the safe adoption of new hydrogen technologies.

Prof Liu, Director of CHI, shared, “The Centre will leverage on expertise from NUS in education, research, and entrepreneurship to provide thought leadership, cutting-edge science and technologies and foster collaborations to catalyse breakthroughs and innovations in the global hydrogen economy.”

For a start, CHI will be hosting nine innovative projects in hydrogen-related research with each project receiving up to S$250,000. These research projects will focus on creating disruptive technologies related to building a hydrogen economy in Singapore such as the development of hydrogen carriers – chemicals that contain hydrogen to be extracted – and infrastructure.

Ammonia is known to be an effective hydrogen carrier and a potential carbon-free fuel. However, the process of extracting hydrogen from ammonia encounters technological barriers. Led by Associate Professor Yan Ning from the Department of Chemical and Biomolecular Engineering under the NUS College of Design and Engineering (NUS CDE), his team will be looking to develop more energy-efficient and greener methods of extracting hydrogen from ammonia.

Working to boost local on-demand production of hydrogen, Associate Professor Wang Qing and his team from the Department of Materials Science and Engineering under NUS CDE, have devised a type of redox-flow battery system that can combine electricity storage and hydrogen production through specially formulated chemicals, powered by renewable energy such as solar. This allows for stable hydrogen production and electricity storage. The latter could be used to charge electric cars or supply Singapore’s electrical grid.

Spearheading another innovative project are Assistant Professor Lum Yanwei and Assistant Professor Wang Lei from the Department of Chemical and Biomolecular Engineering under NUS CDE. Together with their teams, they will be looking at how hydrogen could be converted directly from water into a high energy density liquid hydrogen carrier, bypassing the step of extracting hydrogen from water to form hydrogen gas. This could potentially circumvent the safety hazards and costs involved in transporting, storing and utilising hydrogen.

“Through the new Centre, we aim to advance hydrogen-related R&D in Singapore to solve high-value problems that can significantly bring down the cost of green hydrogen as a fuel. At the same time, we will provide talent training for both academia and industry to grow the pool of hydrogen-related researchers, as well as upskill the workforce to prepare Singapore for a hydrogen economy,” said Prof Liu.

Going forward, CHI is looking to bring these cutting-edge research and technologies to the market through collaborations with agencies and industry leaders both locally and internationally to reduce the green hydrogen cost for a hydrogen economy.