Industry and private consumers alike depend on oil and gas pipelines that stretch thousands of kilometers underwater. It is not uncommon for these pipelines to become clogged with deposits. Until now, there have been few means of identifying the formation of plugs in-situ and non-destructively. Measurements at the Research Neutron Source Heinz Maier-Leibnitz (FRM II) at the Technical University of Munich (TUM) now show that neutrons may provide the solution of choice. 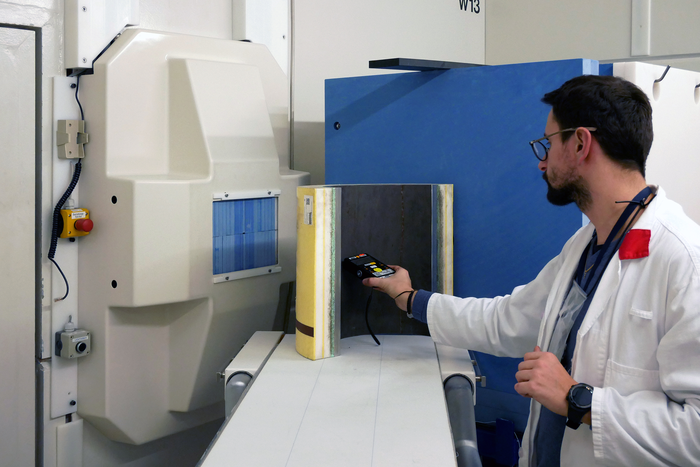 Industry and private consumers alike depend on oil and gas pipelines that stretch thousands of kilometers underwater. It is not uncommon for these pipelines to become clogged with deposits. Until now, there have been few means of identifying the formation of plugs in-situ and non-destructively. Measurements at the Research Neutron Source Heinz Maier-Leibnitz (FRM II) at the Technical University of Munich (TUM) now show that neutrons may provide the solution of choice.

Oil and gas pipelines are the arteries of our energy supply. As with the Nord Stream pipelines, they transport the sources of energy over long distances underwater to storage and production facilities on land.

But it’s not just supply bottlenecks, as we have them now, that can lead to shortages. Under certain conditions, the mixture in the pipelines – which typically comprises gas, oil, and water – can become very viscous and even form solid phases.

Especially inconvenient for operators are solid hydrates that form from gas and water, for example when the mixture cools down to the low temperatures of the seabed during longer pipeline shutdowns.

Previous approaches do not work underwater

For a clog to be remediated in-situ, the affected section of the pipeline must first be found. Localizing clogs from the outside is challenging, since they can form anywhere along the length of the pipeline.

To date, thermal imaging cameras and gamma rays are used to detect the clogs. However, neither of these methods works underwater. Ultrasound, on the other hand, has no problem penetrating water, but the hydrate blocks can only be detected at close range from outside the pipeline wall.

This constraint poses practical difficulties because underwater pipelines are laid at depths of up to 2000 meters and are often naturally covered by seabed materials like sand or silt. Another technical challenge associated with acoustic methods arises from the lack of a clear difference between the acoustic impedances of the hydrate phase and other phases of the crude oil mixture, which makes discrimination difficult.

TechnipFMC, a company with around 20,000 employees worldwide that specializes in subsea pipelines, was “Looking for a more efficient method to find the plugs in a non-contact, non-destructive and reliable way despite thick walls,” says Dr. Xavier Sebastian, a project manager at the company.

As suggested by Dr. Sophie Bouat, CEO of Science-S.A.V.E.D. (Scientific Analysis Vitalises Enterprise Development), “Neutrons are the perfect probe for the task at hand.” She established the contact to the scientists at the Heinz Maier-Leibnitz Zentrum in Garching near Munich.

“Using prompt gamma neutron activation analysis, light atoms and hydrogen in particular can be detected very precisely,” she continues. Since the hydrogen content of hydrates and normal oil or gas is considerably different, it should be possible to detect blockages by measuring the hydrogen concentration.

Dr. Ralph Gilles industry coordinator at the Research Neutron Source FRM II carried out a feasibility study on this topic together with other colleagues from the Technical University of Munich and the Forschungszentrum Jülich. Using the PGAA (Prompt Gamma Activation Analysis) instrument, which utilizes cold neutrons from FRM II, the researchers established that this approach can be used to differentiate between oil and gas and the blockage.

At the NECTAR radiography and tomography facility and the FaNGAS (fast neutron-induced gamma ray spectroscopy) instrument they used fast neutrons from FRM II to show that a sufficiently large number of neutrons penetrate the metal walls of the pipelines to facilitate the respective measurement, and that the measurement also works well underwater.

The results clearly demonstrate that neutrons are ideally suited for this application. Moreover, “Our experiments have shown that we can even distinguish an incipient blockage from a fully developed one,” says Dr. Ralph Gilles. “That’s very beneficial, because then one can even preventatively heat a pipe segment to melt the blockage before it fully develops.”

In practice, a mobile detector with a small neutron source will move back and forth along the pipeline to look for plugs. “We are very pleased that, with the help of the measurements at the research neutron source, we have now found an efficient method that makes it much easier to detect these plugs in the future,” says Dr. Xavier Sebastian.

Besides scientists of the Technical University of Munich, researchers of Forschungszentrum Jülich and RWTH Aachen University contributed to the analysis. The contact to the company TechnipFMC was mediated through the company Science-S.A.V.E.D. (Scientific Analysis Vitalises Enterprise Development). Access for beam time was paid by TechnipFMC.