New music styles: How the challenger calls the tune

What drives fashion changes? A quantitative network analysis of almost 8 million musical albums, released between 1956 and 2015, offers an answer to a century-old debate 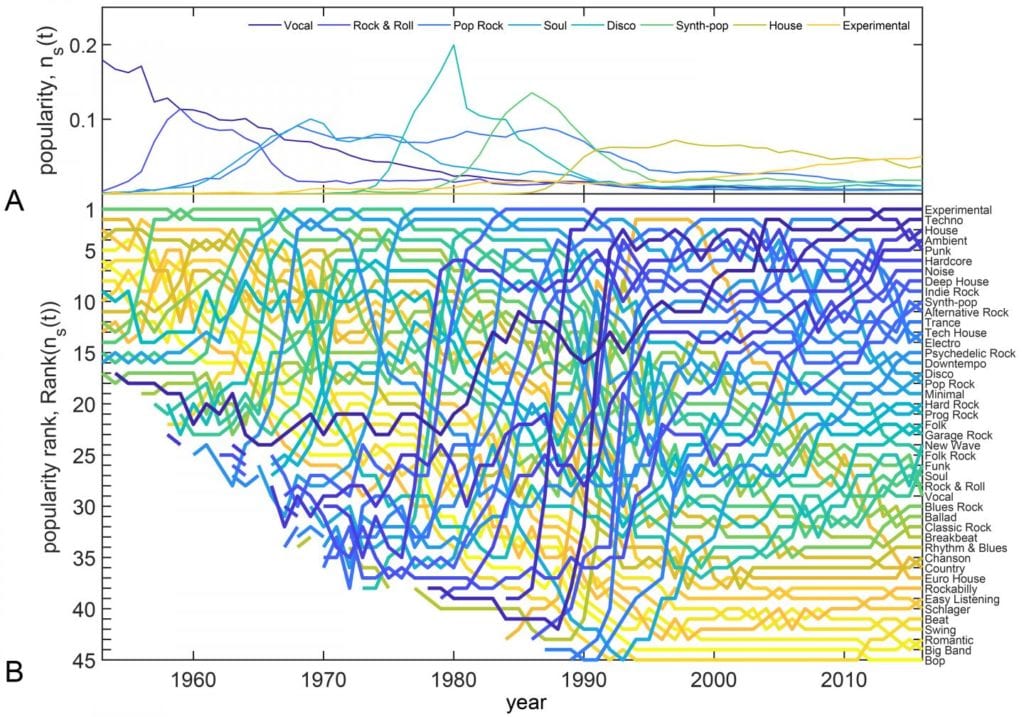 [Vienna, February 6, 2019] A research team led by scientists at the Complexity Science Hub Vienna (CSH) found that fashion cycles in music are driven by outsider groups. These outsiders challenge the dominant music style by strongly contrasting the preferences of the current elite, for instance, by using different instrumentation or new rhythms. “They use counter-signaling,” explains Stefan Thurner, one of the authors of a new paper in the Journal of the Royal Society Interface. “To put it very bluntly: With a new style, music producers try to slap the old one in the face,” says Thurner.

The social dynamics that lead to new fashions and trends have long been, and still are, subject to heated debate and contradictory theories in sociology. The “costly signaling theory,” for example, claims that elites try to establish distinctions by using styles that are too costly to be adopted by non-members of the group. In contrast to this top-down approach, random-pattern theories postulate that elites randomly pick features from non-elite groups and incorporate them to create a new style from the bottom-up.

Peter Klimek and Stefan Thurner, both CSH and Medical University of Vienna, and Robert Kreuzbauer, University of Surrey, propose an alternative explanation for the evolution of new styles: elite competition in the form of opposition–scientifically called counter-signaling. Elites are defined in this paper as social groups with disproportionate access to certain resources. In the context of music production, elites are those who dominate the most popular music style(s) at a given time.

The scientists tested the three approaches of costly signaling theory, random-pattern theories and counter-dominance signaling, with a large dataset containing almost eight million musical albums, released between 1956 and 2015. The data were derived from Discogs, a crowdsourced online music database. Discogs provides detailed user-generated information on millions of albums, such as artists or instrumentation, and the assignment of each record to one or several of 422 different musical styles.

“We first analyzed whether non-elites imitate elements like music arrangements, sounds or production techniques of current elites,” says Peter Klimek. “We found that this happens a lot. After the breakthrough of the American rock band Nirvana, for instance, a whole wave of alternative rock bands adopted elements of Nirvana’s grunge style in the 1990s.”

Next the researchers tested the costly-signaling theory: Would the most popular musicians abandon their style once newcomers started to copy them? “We found the contrary,” replies Klimek. “Elites rather like to see others adopt their symbols and styles. It might be a sign of their cultural influence.”

Finally, they examined whether new musical styles emerge at random, as random-pattern theories would suggest. They did not, Klimek states. “New styles clearly show counter-signals that provocatively challenge the currently popular styles.” The grungy rock of Nirvana thumbed its nose at highly polished stadium rock of the ’80s with bands like Queen or Guns N’ Roses; punk was a counter-signal to the hugely popular “soft rock” of the ’70s with musicians like Elton John, Simon & Garfunkel or Tina Turner leading the charts, says the complexity scientist. “Once the new style is adopted by a sufficiently large number of followers, its representatives become the new elite and the cycle starts from the beginning.”

“We demonstrate with a strictly data-driven, quantitative method that new fashions in music gain their impulse from a strong opposition to current trends,” Stefan Thurner points out. “This should also be tested for in other domains, be they architecture, art, fashion, or even politics and science. In the case of musical styles, the counter-signaling hypothesis best explains how novelty emerges.”

Beyond styles, the paper shows “how Big Data analytics can be used to come to a better understanding of the many layers of complex dynamics in human society–here, how elites come to power, persist for a while, and eventually get overthrown,” concludes Thurner.

The mission of CSH Vienna is to host, educate, and inspire complex systems scientists dedicated to making sense of Big Data to boost science and society. Scientists at the Hub develop methods for the scientific, quantitative, and predictive understanding of complex systems. Focal areas include the resilience and efficiency of socio-economic and ecological systems, network medicine, the dynamics of innovation, and the science of cities.

Study: Americans would rather drive themselves than have an autonomous vehicle…

Scienmag Sep 16, 2019
Credit: Gao et al./Transportation Many Americans use a ride-hailing service -- like Uber or Lyft -- to get to…