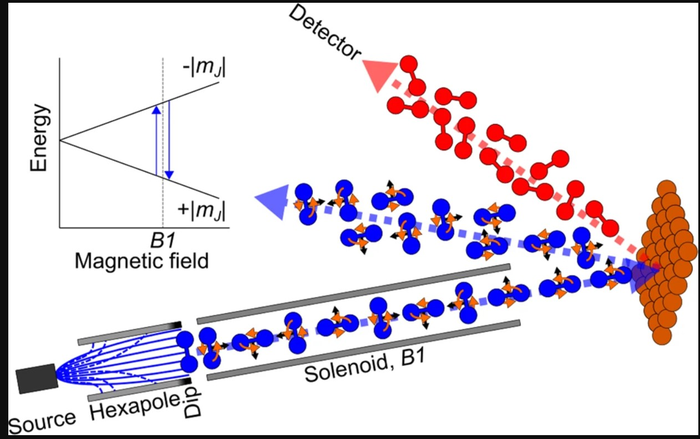 While invisible to the naked eye, we are surrounded by molecules which are flying by, rotating and constantly colliding with each other and with surfaces. The interaction of gas phase molecules with solid surfaces governs a huge variety of surface chemistry processes. For example, the heating of a space craft re-entering the atmosphere and reactions on ice particles which determine the composition of our atmosphere.

While the molecules rotate freely in the gas phase, when they approach a surface this changes. On the one hand the rotation can be changed by the collision. On the other hand, the rotational motion can also change the interaction with the surface, for example determining whether the molecule will bounce back or stick to the surface.

Understanding and controlling such processes on a microscopic level is fundamental to understanding surface chemistry.

A significant step forward was recently reported by Swansea researchers from the surface dynamics group in the chemistry department, led by Professor Gil Alexandrowicz.  They managed to control the probability that a molecule will stop rotating after colliding with a surface.

Over the years, scientists have developed techniques for controlling molecular rotations, which involve disturbing molecules with photons or electrons that supply or remove energy from the molecules to compensate for the increased or decreased rotational energy.

What is different about the Swansea team’s work is that they demonstrated the possibility of stopping the rotation of a molecule without using photons or electrons. and without having to use an equivalent amount of energy in order to bring about the changes.

Instead, the experiments, conducted by Dr Helen Chadwick, used magnetic manipulations of the quantum state of a molecule just before it collides with a surface, to change the probability that the molecule will stop rotating after the collision.

The relatively large rotational energy of the incoming molecules is converted during the collision into kinetic energy of the non-rotating scattered molecules.  The magnetic energy, which is a billion times smaller, controls the process and makes this energy conversion more or less likely to happen.

This is somewhat similar to a tiny mosquito, which definitely can’t move an elephant that is a billion times heavier, but could perhaps annoy him into moving.

“Our study contributes to understanding of molecule-surface interaction. Our theoretician colleagues are constantly improving modelling methods for surface chemistry, nevertheless, even the state of the art methods cannot fully explain the results we measured, making them an important benchmark for further development of theory.

I believe our results also question some popular preconceptions in the scientific community. Many modern quantum control experiments are performed at ultra-low temperatures, where the idea is that without sufficient cooling, random effects due to thermal energies will overwhelm the quantum phenomena which is studied or controlled.

Whilst this is definitely true in many cases, our experiments are an interesting counter example. The quantum state control we perform is on the pico-eV scale, whereas all the other energies, including the rotational energies and more importantly the thermal energy of the molecular beam and the surface are nine orders of magnitude larger. Nevertheless, this does not stop us from achieving quantum state control and measuring its effect on molecular rotations. “

The research paper is entitled: “Stopping molecular rotation using coherent ultra-low-energy magnetic manipulations.”  It has been published in Nature Communications.

Swansea University is a world-class, research-led, dual campus university offering a first-class student experience and has one of the best employability rates of graduates in the UK. The University has the highest possible rating for teaching – the Gold rating in the Teaching Excellence Framework (TEF) in 2018 and was commended for its high proportions of students achieving consistently outstanding outcomes.

Swansea climbed 14 places to 31st in the Guardian University Guide 2019, making us Wales’ top ranked university, with one of the best success rates of graduates gaining employment in the UK and the same overall satisfaction level as the Number 1 ranked university.

The 2014 Research Excellence Framework (REF) 2014 results saw Swansea make the ‘biggest leap among research-intensive institutions’ in the UK (Times Higher Education, December 2014) and achieved its ambition to be a top 30 research University, soaring up the league table to 26th in the UK.

The University is in the top 300 best universities in the world, ranked in the 251-300 group in The Times Higher Education World University rankings 2018.  Swansea University now has 23 main partners, awarding joint degrees and post-graduate qualifications.

The University was established in 1920 and was the first campus university in the UK. It currently offers around 350 undergraduate courses and 350 postgraduate courses to circa 20,000 undergraduate and postgraduate students.  The University has ambitious expansion plans as it moves towards its centenary in 2020 and aims to continue to extend its global reach and realise its domestic and international potential.

Swansea University is a registered charity. No.1138342. Visit www.swansea.ac.uk