For the first time, stealth coronal mass ejections can be detected before they wreak havoc on Earth without the need for dedicated spacecraft 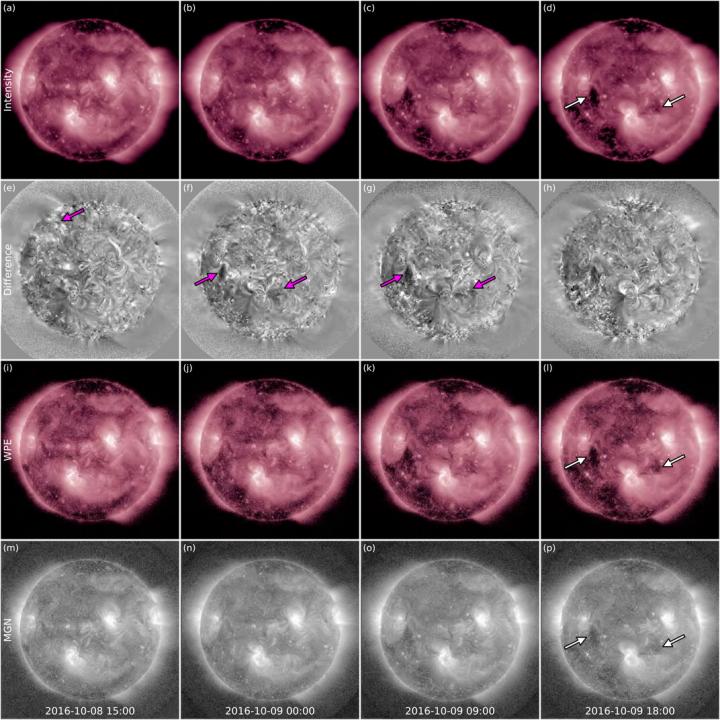 On 23 July 2012, humanity escaped technological and economic disaster. A diffuse cloud of magnetized plasma in the shape of a slinky toy tens of thousands of kilometers across was hurled from the Sun at a speed of hundreds of kilometers per second.

This coronal mass ejection (CME) just missed the Earth because its origin on the Sun was facing away from our planet at the time. Had it hit the Earth, satellites might have been disabled, power grids around the globe knocked out, GPS systems, self-driving cars, and electronics jammed, and railway tracks and pipelines damaged. The cost of the potential damage has been estimated at between $600bn and $2.6trn in the US alone.

While CMEs as large as the 2012 event are rare, lesser ones cause damage on Earth about once every three years. CMEs need between one and a few days to reach Earth, leaving us some time to prepare for the potential geomagnetic storm. Current efforts to limit any damage include steering satellites out of harm’s way or redirecting the power load of electrical grids. But many CMEs — called ‘stealth CMEs’ because they don’t produce any clear signs close to the Sun’s surface — aren’t detected until they reach Earth.

Now, an International Space Science Institute (ISSI) team of scientists from the US, Belgium, UK, and India shows how to detect potentially damaging stealth CMEs, trace them back to their region of origin on the Sun, extrapolate their trajectory, and predict if they will hit Earth. The results were recently published in the journal Frontiers in Astronomy and Space Sciences.

“Stealth CMEs have always posed a problem, because they often originate at higher altitudes in the Sun’s corona, in regions with weaker magnetic fields. This means that unlike normal CMEs — which typically show up clearly on the Sun as dimmings or brightenings — stealth CMEs are usually only visible on devices called coronagraphs designed to reveal the corona,” said corresponding author Dr Erika Palmerio, a researcher at the Space Sciences Laboratory of the University of California at Berkeley.

“If you see a CME on a coronagraph, you don’t know where on the Sun it came from, so you can’t predict its trajectory and won’t know whether it will hit Earth until too late.”

Palmerio continued: “But here we show that many stealth CMEs can in fact be detected in time if current analysis methods for remote sensing are adapted. Put simply, we compared ‘plain’ remote sensing images of the Sun with the same image taken between eight and 12 hours earlier, to capture very slow changes in the lower corona, up to 350,000km from the Sun’s surface. In many cases, these ‘difference images’ revealed small, previously overlooked changes in the loops of magnetic fields and plasma that are hurled from the Sun. We then zoom in on these with another set of imaging techniques to further analyze the stealth CME’s approximate origin, and predict whether it is headed towards Earth.”

Palmerio and collaborators looked at four stealth CMEs that occurred between 2008 and 2016. Unusually for stealth CMEs, their origin on the Sun was approximately known only because NASA’s twin STEREO spacecraft, launched in 2006, had happened to capture them ‘off-limb’. This means it was viewed outside the Sun’s disc from another angle than from Earth.

With the new imaging techniques, the authors revealed previously undetected, tiny dimmings and brightenings on the Sun at the region of origin of all four stealth CMEs. They conclude that the technique can be used for the early detection of risky stealth CMEs.

“This result is important because it shows us what to look for if we wish to predict the impact on Earth from solar eruptions,” said Palmerio.

“Another important aspect of our study — using geometric techniques to locate a CME’s approximate source region and model its 3D structure as it expands and moves towards Earth — can only be implemented when we have more dedicated observatories with different perspectives, like the STEREO spacecraft.”

The authors predict that the new European Space Agency’s Solar Orbiter, launched in February 2020, will help with this, just like similar initiatives which are currently discussed by researchers worldwide.

“Data from more observatories, analyzed with the techniques developed in our study, could also help with an even more difficult challenge: namely to detect so-called ‘super stealth CMEs’, which don’t even show up on coronagraphs,” said coauthor Dr Nariaki V Nitta, a senior researcher at Lockheed Martin Solar and Astrophysics Laboratory in Palo Alto, US.