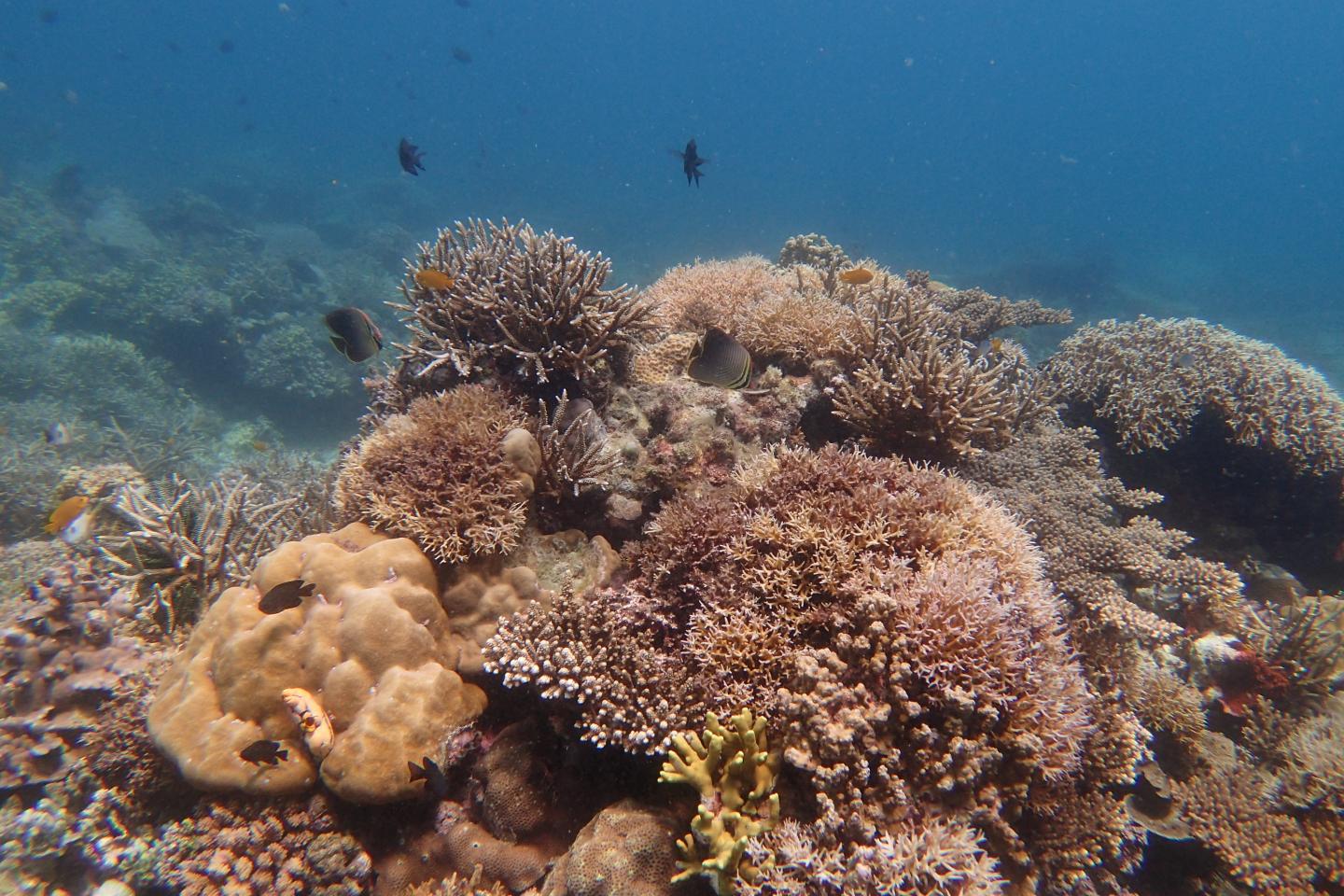 SAN FRANCISCO (February 25, 2019)–The global marine community has cause to celebrate a conservation milestone in the Philippines. The Municipality of Tingloy on Maricaban Island in Batangas Province recently designated 22.01 hectares (54.4 acres) of thriving coral reef habitat as a marine protected area (MPA), only the second MPA to be established in the municipality. Located within the most biologically diverse waters on Earth, the new MPA protects against localized threats while bolstering an emerging ecotourism industry. The new protected area was championed by the local government and community of Tingloy, under the leadership of Mayor Mark Laurence F. Alvarez, along with several collaborating institutions, including the California Academy of Sciences, De La Salle University-Manila, and the local non-profits Pusod Inc. and the SEA Institute – VIP.

“The establishment of this new MPA–and its long-term monitoring–is significant because it recognizes the need to set aside areas for conservation before the reef is lost or damaged beyond its ability to come back,” says Dr. Terry Gosliner, the Academy’s Senior Curator of Invertebrate Zoology. “Artificial reefs will never be as diverse and healthy as natural reefs, so it’s always better to protect the reefs you have than try to play Humpty Dumpty with a damaged or destroyed reef.”

Maricaban Island is situated in the Verde Island Passage, a treasure trove of marine life nestled between the island of Luzon to the north and Mindoro to the south. The new MPA–named Pirasan–encompasses a mature, healthy, and resilient reef ecosystem. Like all reefs, however, it faces threats from local pollution, sedimentation, coastal development, and global climate change.

The municipality of Tingloy is deeply committed to monitoring the reef’s ongoing health. A two-year program designed by Academy scientists Drs. Terry Gosliner and Meg Burke in collaboration with Drs. Wilfredo Y. Licuanan of De La Salle University-Manila, Kent Carpenter of Old Dominion University, and Jeff Williams of the Smithsonian Institution empowers local residents to steward the reef. Residents routinely survey marine species indicative of reef health and monitor trash along the shore. These community-driven survey results are then integrated with additional data collected by program scientists into a “reef health report card” that establishes a baseline of comparison and measures the effectiveness of the MPA over time.

In addition to Pirasan, Tingloy is also finalizing plans for three other MPAs based on recommendations from Academy scientists and community input collected during earlier research expeditions in the region. During March of last year, Drs. Terry Gosliner and Meg Burke along with their program partners provided scientific justification for Pirasan’s protection when recommending locations to Tingloy government officials that would benefit from MPA status.

Due to the success of the only other MPA in Tingloy, which has been in place for over ten years, many local fishermen are now recognizing the positive impact conservation measures have for sustaining fish stocks: Fishermen are now harvesting more fish from the waters surrounding the MPA than they did before the MPA was established. Healthy reefs also open opportunities for earning new livelihoods from ecotourism and provide greater protection from storm surges caused by typhoons. Near Tingloy’s new MPA, a sandy beach is becoming a bustling tourist destination and a launching point for visitors to witness the natural beauty of the protected area by boat and snorkeling.

“Tingloy is a community like so many in the Philippines and tropical world that is trying to figure out how to feed their families in the face of climate change and diminishing resources,” says Dr. Meg Burke, Academy Director of Science Integration and Operations. “It’s not always easy to recognize that the short-term sacrifice of establishing a marine protected area, which limits fishing activity and may mean your family has less to eat today or tomorrow, is worth it for the long-term gain of nurturing healthy reef ecosystems. Pirasan is a symbolic step toward recognizing greater future yields, more livelihood opportunities, and a brighter future.”

About Research at the California Academy of Sciences

The Institute for Biodiversity Science and Sustainability at the California Academy of Sciences is at the forefront of efforts to understand two of the most important topics of our time: the nature and sustainability of life on Earth. Based in San Francisco, the Institute is home to more than 100 world-class scientists, state-of-the-art facilities, and nearly 46 million scientific specimens from around the world. The Institute also leverages the expertise and efforts of more than 100 international Associates and 450 distinguished Fellows. Through expeditions around the globe, investigations in the lab, and analyses of vast biological datasets, the Institute’s scientists work to understand the evolution and interconnectedness of organisms and ecosystems, the threats they face around the world, and the most effective strategies for sustaining them into the future. Through innovative partnerships and public engagement initiatives, they also guide critical sustainability and conservation decisions worldwide, inspire and mentor the next generation of scientists, and foster responsible stewardship of our planet.

De La Salle University positions itself as a leader in molding human resources who serve the church and the nation. It is a Catholic coeducational institution founded in 1911 by the Brothers of the Christian Schools. The University is a hub for higher education training renowned for its academic excellence, prolific and relevant research, and involved community service. DLSU is one of only two Philippine universities in the Times Higher Education list of best universities in the Asia-Pacific region for 2019.

Pusod, Inc. is a non-profit organization whose mission is to protect and enhance the ecosystems of the Philippines. Working with local communities and strategic partners, Pusod focuses on projects in the Taal Lake Protected Landscape, the Verde Island Passage, and Mt. Malarayat Forest Reserve in Batangas Province. Pusod was formed in Manila in March 2004 to further the work originally begun in 1995 by the Babilonia Wilner Foundation.

About the SEA Institute – VIP

The SEA Institute is a non-profit organization that promotes conservation in the Verde Island Passage through Science, Education and Advocacy projects. SEA-VIP hopes that recognizing the VIP’s rich biodiversity and its benefits will inspire communities in the Passage to protect and conserve this valuable and unique resource. SEA-VIP works with research, academic and community partners and volunteers on sustainable livelihood enterprises, reef monitoring programs and science camps for the youth.