Material could be used to cool electronic devices, overheated vehicles 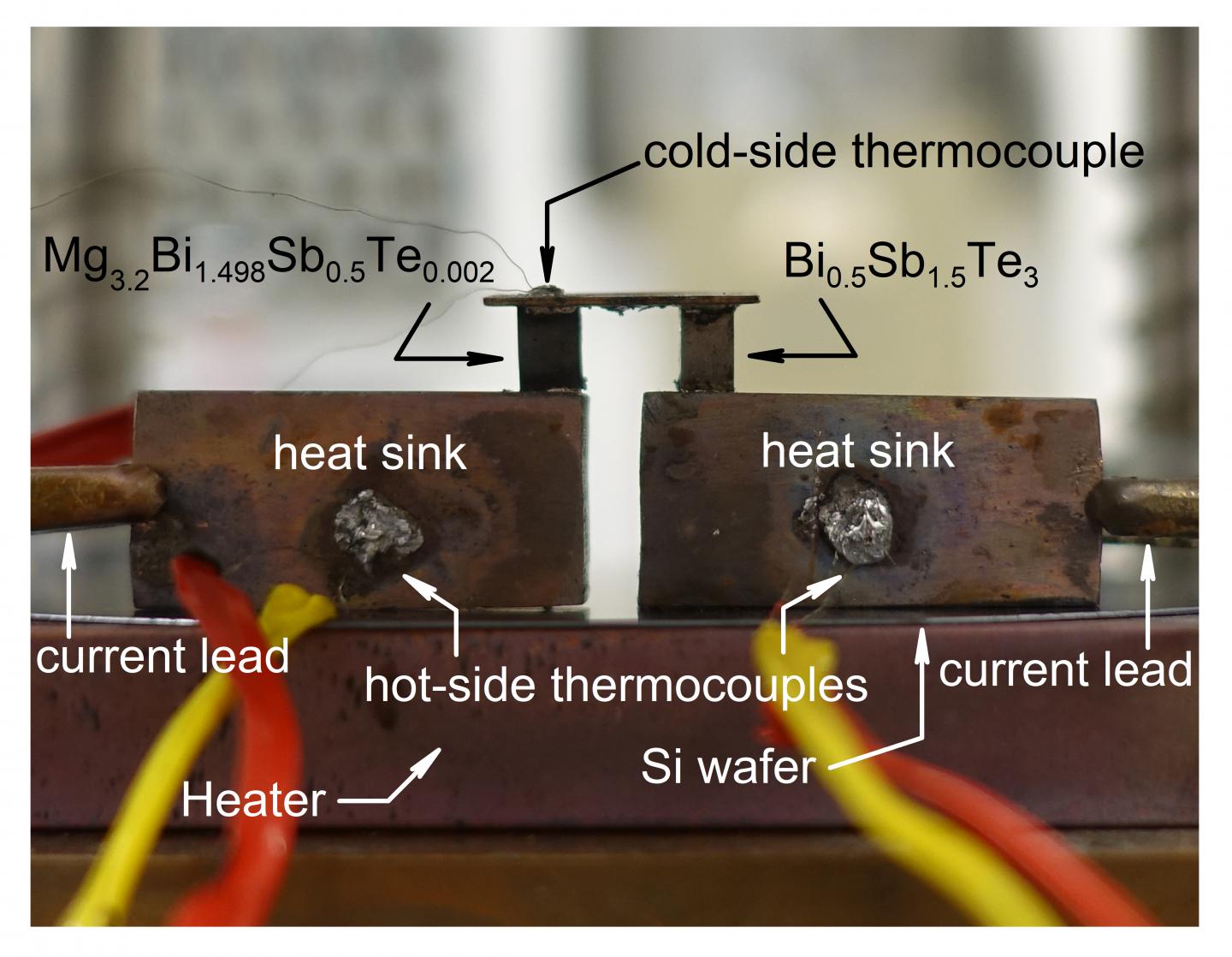 Has your steering wheel been too hot to touch this summer? A new thermoelectric material reported in the journal Science could offer relief.

The widespread adoption of thermoelectric devices that can directly convert electricity into thermal energy for cooling and heating has been hindered, in part, by the lack of materials that are both inexpensive and highly efficient at room temperature.

Now researchers from the University of Houston and the Massachusetts Institute of Technology have reported the discovery of a new material that works efficiently at room temperature while requiring almost no costly tellurium, a major component of the current state-of-the-art material.

The work, described in a paper published online by Science Thursday, July 18, has potential applications for keeping electronic devices, vehicles and other components from overheating, said Zhifeng Ren, corresponding author on the work and director of the Texas Center for Superconductivity at UH, where he is also M.D. Anderson Professor of Physics.

“We have produced a new material, which is inexpensive but still performs almost as well as the traditional, more expensive material,” Ren said. The researchers say future work could close the slight performance gap between their new material and the traditional material, a bismuth-tellurium based alloy.

Thermoelectric materials work by exploiting the flow of heat current from a warmer area to a cooler area, and thermoelectric cooling modules operate according to the Peltier effect, which describes the transfer of heat between two electrical junctions.

Thermoelectric materials can also be used to turn waste heat – from power plants, automobile tailpipes and other sources – into electricity, and a number of new materials have been reported for that application, which requires materials to perform at far higher temperatures.

Despite the challenge, thermoelectric cooling modules also, at least for now, offer more commercial potential, in part because they can operate for a long lifespan at cooler temperatures; thermoelectric power generation is complicated by issues related to the high temperatures at which it operates, including oxidation and thermal instability.

Bismuth-tellurium alloys have been considered the best-performing material for thermal cooling for decades, but the researchers said the high cost of tellurium has limited widespread use. Jun Mao, a post-doctoral researcher at UH and first author on the paper, said the cost has recently dropped but remains about $50/kilogram. That compares to about $6/kilogram for magnesium, a primary component of the new material.

In addition to Ren and Mao, additional authors on the paper include Hangtian Zhu, Zihang Liu and Geethal Amila Gamage, all of the UH Department of Physics and TcSUH, and Zhiwei Ding and Gang Chen of the Department of Mechanical Engineering at the Massachusetts Institute of Technology.

They reported that the new material, comprised of magnesium and bismuth and created in a form carrying a negative charge, known as n-type, was almost as efficient as the traditional bismuth-tellurium material. That, combined with the lower cost, should expand the use of thermoelectric modules for cooling, they said.

To produce a thermoelectric module using the new material, researchers combined it with a positive-charge carrying, or p-type, version of the traditional bismuth-tellurium alloy. Mao said that allowed them to use just half as much tellurium as most current modules.

Because the cost of materials accounts for about one-third of the cost of the device, that savings adds up, he said.