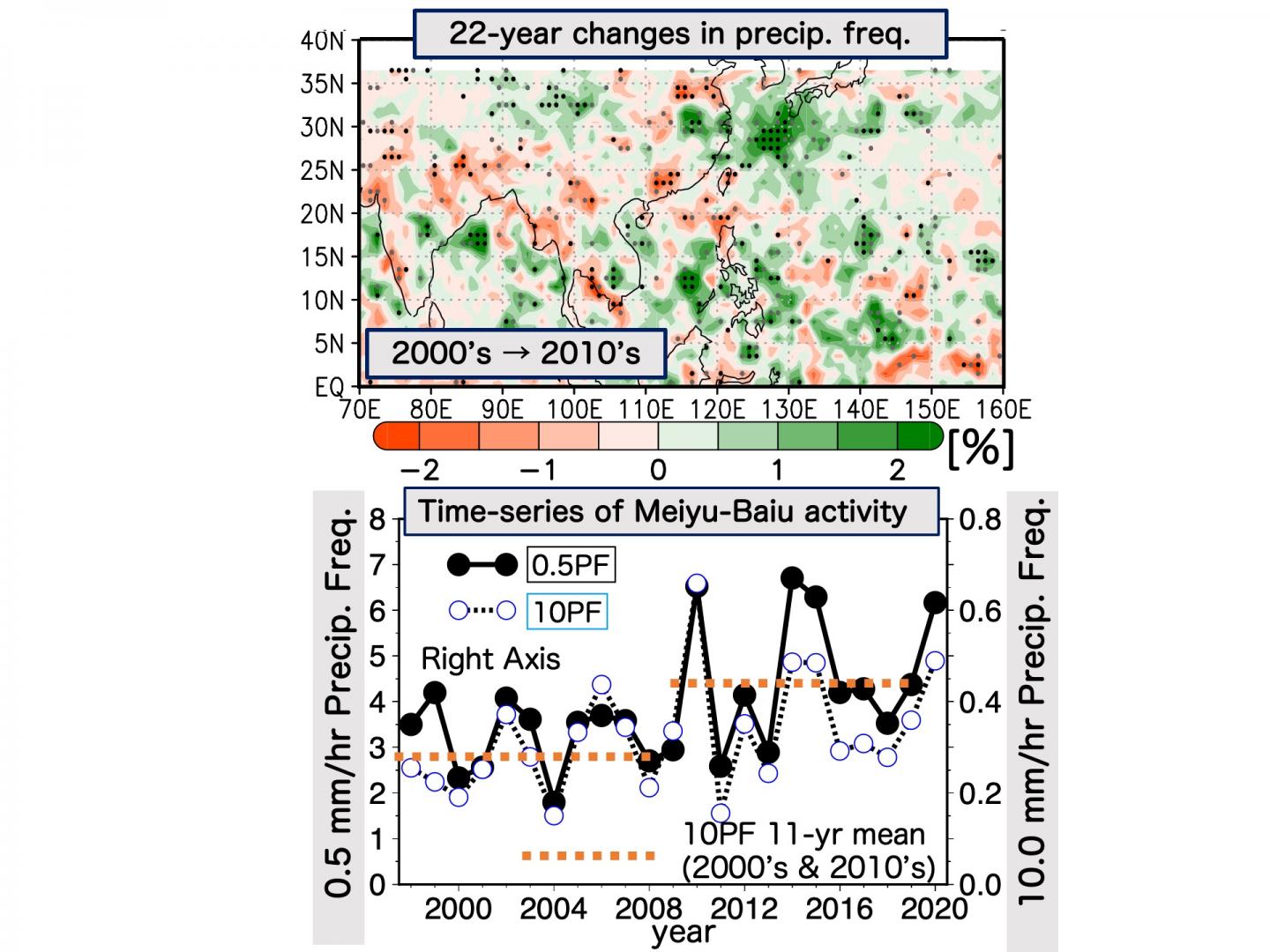 Tokyo, Japan – Researchers from Tokyo Metropolitan University have analyzed long-term precipitation radar data from satellites and found significantly enhanced rainfall over the most recent decade during the annual Meiyu-Baiu rainy season in East Asia. The data spans 23 years and gives unprecedented insight into how rainfall patterns have changed. They showed that the increased rainfall was driven by the decadal increased transport of moisture from the tropics and frequent occurrence of the upper tropospheric trough over the front.

From the second half of June to the first half of July every year, East Asia is subject to a particularly rainy spell known as the Meiyu (in China) or Baiu (in Japan) season or “plum rains,” from the ripening of plums along the Yangtze River. They are triggered by the so-called Meiyu-Baiu front, where the flow of moist air around the Asian monsoon region meets anti-cyclonic flows around the rim of the western North Pacific subtropical high (WNPSH). Though they bring much needed water to the region, recently, it seems that the floods they trigger have taken a deadly turn, with widespread destruction; flooding in China and Japan in 2020 was particularly devastating. For scientists and policymakers, it is vital that this be put within the framework of a bigger picture: are these simply anomalies, or are they here to stay?

Though studied in much depth, the majority of studies use rainfall gauge measurements and observations of cloud activity around land. An overall picture of rainfall throughout the region was lacking, particularly analyses which spanned long periods of time. Now, a team led by Assistant Professor Hiroshi Takahashi have examined satellite data featuring radar measurements of precipitation. They combined two sets of data, the Tropical Rainfall Measuring Mission (TRMM) and the Global Precipitation Measurement Mission (GPM). The full set of data spans 23 years and covers both the sea and the land with equal precision. Through careful analysis of the time series, they confirmed a significant elevation in rainfall over the past decade. In particular, they showed that there has been a clear increase in the number of extreme precipitation events, the kind that can trigger natural disasters.

The question is why it has changed. The team focused on two aspects of the development of rainfall, the transport of moisture and changes in the flow of air in the upper troposphere. Firstly, they showed that there has been increased transport of water vapor along the rim of the WNPSH, largely due to decreased tropical cyclone activity, a trend seen both in decade-to-decade comparisons and the devastating season of 2020. Furthermore, they showed there were anomalous circulations in the upper troposphere, creating a “trough” that drove air upwards around the western edge of the Meiyu-Baiu front, strongly correlated with enhanced rainfall.

Through a full analysis of data encompassing a far larger area and a longer time span than before, the team’s findings put the recent changes in the Meiyu-Baiu season in East Asia within the framework of a globally changing climate. They hope that new standards for average rainfall are reflected in new standards of disaster prevention.

This work was supported by a KAKENHI Grant-in-Aid from the Japan Society for the Promotion of Science (JSPS) (No. 19H01375), the Environment Research and Technology Development Fund of the Environmental Restoration and Conservation Agency of Japan (Grant No. JPMEERF20192004), and the Japan Aerospace Exploration Agency/Earth Observation Research Center (PI No. ER2GPF012).