New insights into the interaction of ocean, continent and atmosphere 2.7 billion years ago

What did the Earth look like 2.7 billion years ago and what were the differences compared to today? What was the chemical composition of the oceans and atmosphere? When did life evolve on Earth, that produced enough oxygen to permanently change the environment? How did the interaction of the Earth’s mantle and crust work? These are all crucial questions for understanding our planet. 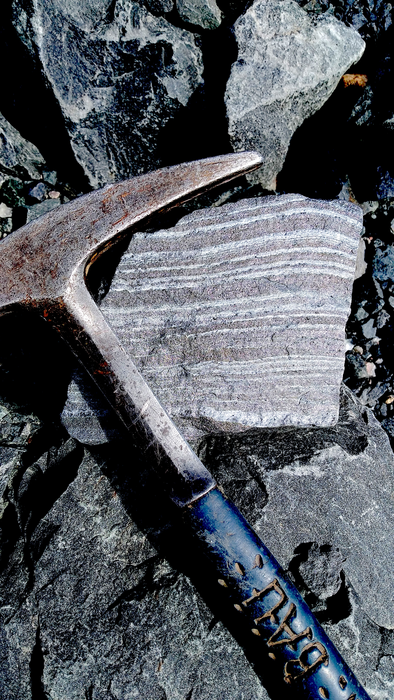 What did the Earth look like 2.7 billion years ago and what were the differences compared to today? What was the chemical composition of the oceans and atmosphere? When did life evolve on Earth, that produced enough oxygen to permanently change the environment? How did the interaction of the Earth’s mantle and crust work? These are all crucial questions for understanding our planet.

The Temagami BIF rock formation provides clues to answering these questions. The abbreviation BIF stands for Banded Iron Formation and refers to sedimentary rocks with alternating bands of quartz and iron oxides, which formed on the seafloor in the early history of the Earth. Using these rocks, the researchers from Germany, Austria and Denmark were able to show that the iron-rich bands form in seawater when the water was strongly influenced by hot solutions from the deep seafloor. These so-called black smokers still exist today at the mid-ocean ridges.

While the iron bands provide information about the Earth’s mantle and the deep sea, the brighter quartz bands in the BIFs contain information about the continents and about the environmental conditions on the landmasses. This is because they were formed when the seawater was dominated by rivers, that is, by input from land, as was revealed by the results of the determination of the germanium-silicon ratios at Kiel University.

For the iron and quartz bands, researchers from the University of Copenhagen and Jacobs University then studied chromium isotope ratios and thorium-uranium systematics. The results for the quartz bands show that, unlike in the deep sea, there were regions on the landmasses where organisms produced enough oxygen to oxidize chromium and uranium and transport them in large quantities to sea already as early as 2,700 million years ago. “It came as a surprise that in this region this apparently happened more than 200 million years before the actual Great Oxidation Event,” said Michael Bau, “Our results suggest that there were already oxygen oases on the early Earth before the planet’s atmosphere turned permanently oxic.”

At the University of Vienna, the scientists determined the isotope ratios of tungsten-182 to -184 using a high-precision method, which also show subtle differences between the iron and quartz bands. Tungsten-182 is formed by the radioactive decay of hafnium-182, which, however, had already disappeared shortly after the formation of the Earth due to its very short half-life. Experts call this an “extinct” isotope system. Since the iron bands provide information about the Earth’s mantle, and the quartz bands provide information about the Earth’s crust, these subtle differences allow conclusions to be drawn about the mixing and homogenization processes in different regions of the Earth’s interior.

The Temagami BIF in Canada is a major geo-archive that provides valuable information on the evolution of the Earth through the collaboration of many geochemists with their different analytical tools. This helps to better understand the co-evolution of our planet with its atmosphere and oceans and its biosphere. Only this understanding will allow us to use the Earth’s resources as raw materials in a sustainable way and at the same time to preserve the Earth system as our natural habitat.

About Jacobs University Bremen:
Studying in an international community. Obtaining a qualification to work on responsible tasks in a digitized and globalized society. Learning, researching and teaching across academic disciplines and countries. Strengthening people and markets with innovative solutions and advanced training programs. This is what Jacobs University Bremen stands for. Established as a private, English-medium campus university in Germany in 2001, it is continuously achieving top results in national and international university rankings. Its more than 1,600 students come from more than 110 countries with around 80% having relocated to Germany for their studies. Jacobs University’s research projects are funded by the German Research Foundation or the EU Research and Innovation program as well as by globally leading companies.
For more information: www.jacobs-university.de
Facebook | Youtube | Twitter | Instagram | LinkedIn