Ithaca, NY – Rates of anxiety and depression have been increasing around the world for decades, a trend that has been sharply exacerbated by the COVID-19 pandemic. New research led by the Boyce Thompson Institute’s Frank Schroeder could ultimately lead to new therapeutics to help relieve this global mental health burden. 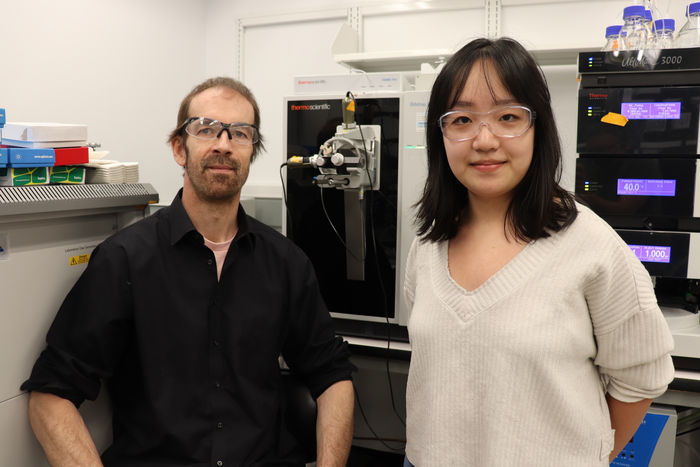 Ithaca, NY – Rates of anxiety and depression have been increasing around the world for decades, a trend that has been sharply exacerbated by the COVID-19 pandemic. New research led by the Boyce Thompson Institute’s Frank Schroeder could ultimately lead to new therapeutics to help relieve this global mental health burden.

First discovered in the 1930s, serotonin is a neurotransmitter produced in many animals that mediates myriad behaviors, such as feeding, sleep, mood and cognition. Drugs that alter serotonin levels are the main weapon to treat psychological conditions like anxiety and depression, as well as eating disorders.

As a simple model for neurobiology research, the microscopic roundworm Caenorhabditis elegans has been used extensively to study serotonin’s role in regulating behavior and food intake. For many years, researchers thought that serotonin was made in C. elegans by one specific molecular pathway, and that serotonin was then quickly degraded. Schroeder’s team and colleagues at Columbia University now demonstrated that both of those assumptions were not quite correct.

“We discovered a second, parallel biosynthetic pathway that accounts for about half of the total serotonin produced in our model system,” said Schroeder.

The findings are described in a paper published in Nature Chemical Biology on October 10.

The work began about three years ago, when the researchers unexpectedly discovered an enzyme that converts serotonin into derivative compounds.

“Most people in the field thought serotonin is made and then quickly broken down, but we found that, instead, it is used as a building block for other compounds that are responsible for some of serotonin’s activity,” explained Schroeder. “So, we decided to start at the beginning and see how serotonin is made, and once it is made then how is it converted into these new molecules.”

“When the worms lack endogenous serotonin, they tend to move quickly across the bacteria food lawn on an agar plate, and turn infrequently to explore the food,” Yu said. “We found this behavior can be alleviated by treating the worms with serotonin derivatives, suggesting these newly identified compounds contribute to effects previously attributed to serotonin.”

The worm C. elegans is an excellent model for studying serotonin because the compound’s molecular signaling pathways are highly conserved across species, including in humans. For example, the researchers showed that in C. elegans a large portion of serotonin is made in the gut, which is also the case in humans.

Schroeder said there are hints that human serotonin is converted into metabolites similar to the ones identified in C. elegans.

“This research opens up the door for many more avenues of research in humans,” said Schroeder, who is also a professor in the Department of Chemistry and Chemical Biology in the college of Arts and Sciences at Cornell University.

The researchers are currently exploring how the new serotonin derivatives affect behavior in C. elegans and whether similar serotonin metabolites exist in humans.

Opened in 1924, Boyce Thompson Institute is a premier life sciences research institution located in Ithaca, New York. BTI scientists conduct investigations into fundamental plant and life sciences research with the goals of increasing food security, improving environmental sustainability in agriculture, and making basic discoveries that will enhance human health. Throughout this work, BTI is committed to inspiring and educating students and to providing advanced training for the next generation of scientists. BTI is an independent nonprofit research institute that is also affiliated with Cornell University. For more information, please visit BTIscience.org.

Parallel pathways for serotonin biosynthesis and metabolism in C. elegans