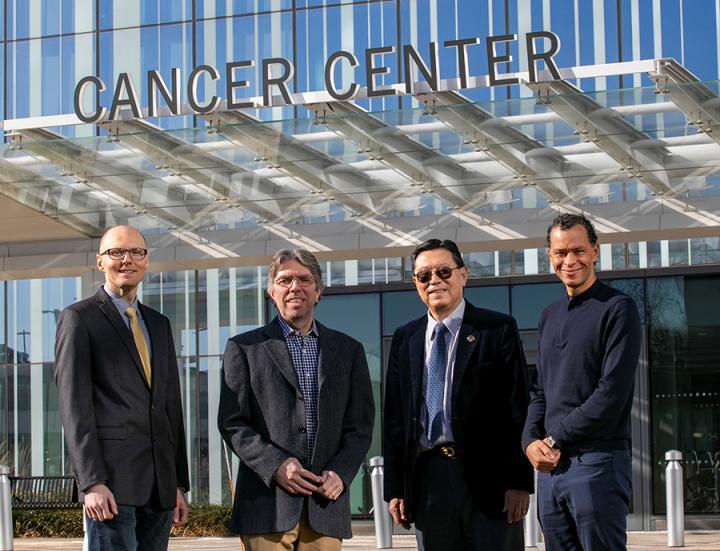 STONY BROOK, NY, January 29, 2020 – When prostate cancer spreads it is often a deadly disease, but now a Stony Brook University-led research team believes a new approach that inhibits a specific fatty acid binding protein (FABP) may be the key to halting disease progression. Their research results on FABP5 inhibitors as promising therapeutic agents against metastatic prostate cancer led to a new five-year grant from the National Cancer Institute (NCI) totaling $4.2 million to advance the research to 2025.

Lead investigator Iwao Ojima, PhD, Distinguished Professor of Chemistry and Director of the Institute of Chemical Biology and Drug Discovery (ICB&DD), along with colleagues at Stony Brook and Cold Spring Harbor Laboratory, in collaboration with Artelo Biosciences, are investigating FABPs in the treatment of inflammation, pain and against certain cancers, as drug targets themselves or in combination with current chemotherapy treatments.

Dr. Ojima and Martin Kaczocha, PhD, (ICB&DD) received a seed grant called a “Fusion Award” from the Renaissance School of Medicine at Stony Brook University to conduct a preliminary study of FABP5 and its inhibitors as potential prostate cancer therapeutic target and agents. Their original work and collaboration with Lloyd Trotman, PhD, a Professor at Cold Spring Harbor Laboratory, led to a paper in The Prostate that showed novel FABP5 inhibitors developed by the ICB&DD team exhibited significant cytotoxicity against highly drug-resistant metastatic prostate cancer cells. FABP5 also enhanced the antitumor effects of taxene drugs in animal models. These promising findings led to the acquisition of the NCI grant.

“This grant is a tremendous example of how collaborative research involving Stony Brook University, Cold Spring Harbor Laboratory and industry have pushed forward a bioscience concept initially supported by seed money from our school to a level where the National Cancer Institute sees its potential as a new and better treatment for metastatic prostate cancer,” said Kenneth Kaushansky, MD, Vice President for Health Sciences and Dean of the Renaissance School of Medicine at Stony Brook University.

Under the grant, the team will leverage structure-based drug design and chemical synthesis approaches to identify best FABP5 inhibitors for potency and selectivity, employ a robust in vitro inhibitor testing platform, and access the efficacy of candidate inhibitors in mouse models. They will also investigate FABP5 inhibitors when used as monotherapies, as well as in combination with FDA approved drugs.

“We expect to continue the momentum of breakthroughs with our cancer research enterprise,” said Yusuf Hannun, MD, Director of the Stony Brook University Cancer Center. “This work is at the frontier of driving novel cancer therapeutics, a major goal for the Stony Brook Cancer Center. This expansion of the research by Dr. Ojima and his colleagues with new federal funding is the type of progressive work we hope sets the bar toward our NCI cancer center designation and impacts patient care in the near future.”

Taxanes are used to treat metastatic prostate cancer. While they can be effective, tumors often build up resistance to these drugs. Patients also often experience adverse effects to these drugs, which results in termination of treatment. The emergence of FABP5 inhibitors could be a potential solution to treating advanced disease more effectively and minimize adverse effects.

“In our research, neither docetaxel or cabazitaxel alone was able to eradicate prostate cancer cells in vitro, while combinations of taxanes with FABP5 inhibitors resulted in complete prostate cell death with synergism at very low concentrations of taxanes,” said Dr. Ojima.

“While the FABP5 inhibitors produced limited or no cell cytotoxicity in noncancerous cells, they achieved near-complete cell death in the prostate cancer cell lines used in our study, which suggests the FABP5 inhibitors would have much fewer side-effects compared with the current taxane/steroid-based therapy,” added Martin Kaczocha, PhD, Assistant Professor, Department of Anesthesiology and co-leader of the collaborative team.

To develop the FABP5 inhibitors for testing against prostate cancer, Dr. Ojima and Dr. Kaczocha are collaborating with Robert Rizzo, PhD, Professor, Department of Applied Mathematics and Statistics, and Trotman, who has developed a unique and highly promising mouse model for metastatic prostate cancer.

They will also collaborate with scientists at Artelo to develop leading FABP inhibitors against prostate cancer.

In 2018, Artelo entered into an exclusive license with the Research Foundation for the State University of New York to the intellectual property of FABP inhibitors for the modulation of the endocannabinoid system for the treatment of pain, inflammation and cancer.

Stony Brook University, widely regarded as a SUNY flagship, is going beyond the expectations of what today’s public universities can accomplish. Since its founding in 1957, this young university has grown to become one of only four University Center campuses in the State University of New York (SUNY) system with over 26,000 students, more than 2,700 faculty members and 18 NCAA Division I athletic programs. Our faculty have earned numerous prestigious awards, including the Nobel Prize, Pulitzer Prize, Indianapolis Prize for animal conservation, Abel Prize and the inaugural Breakthrough Prize in Mathematics. The University offers students an elite education with an outstanding return on investment: U.S.News & World Report ranks Stony Brook among the top 40 public universities in the nation. Its membership in the Association of American Universities (AAU) places Stony Brook among the top 62 research institutions in North America. As part of the management team of Brookhaven National Laboratory, the University joins a prestigious group of universities that have a role in running federal R&D labs. Stony Brook University fuels Long island’s economic growth. Its impact on the Long island economy amounts to $7.38 billion in increased output. Our state, country and world demand ambitious ideas, imaginative solutions and exceptional leadership to forge a better future for all. The students, alumni, researchers and faculty of Stony Brook University are prepared to meet this challenge.

Watered down biodiversity: sample type is critical in environmental…

‘Tickling’ an atom to investigate the behavior of…