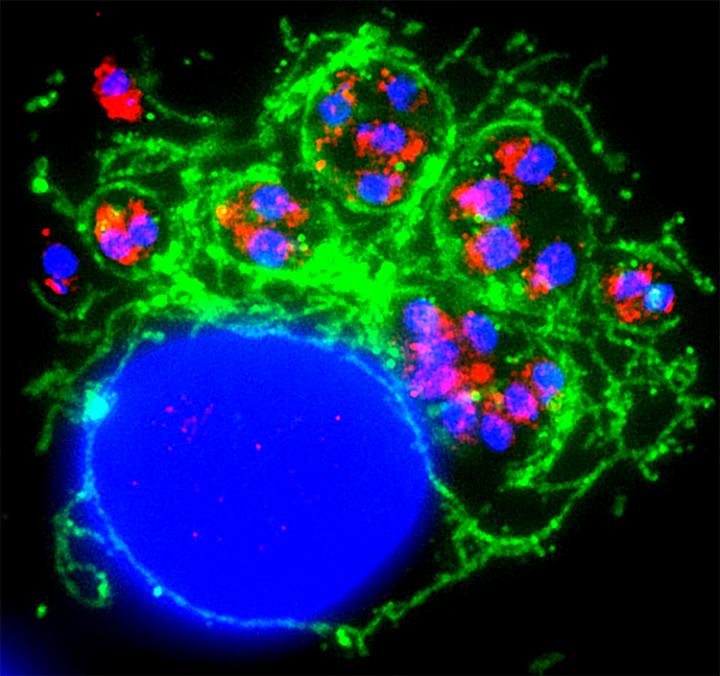 Dou’s work might help pave the way for finding a cure for this disease, which is contracted by eating undercooked contaminated meat, exposure to infected cat feces, or mother-to-child transmission during pregnancy. Toxoplasmosis is the second-leading cause of death among food-borne illnesses in the United States.

Dou and his research collaborator Paul Roepe, a chemistry professor at Georgetown University, will explore ways to disrupt the parasite’s nutrient metabolism, which could lead to the development of new drugs to treat and manage a Toxoplasma infection.

Most healthy people who are infected by the Toxoplasma gondii parasite experience few if any symptoms that go away without any treatment. However, people with compromised immune systems like infants or HIV, cancer and organ transplant patients might experience serious complications that are sometimes fatal.

Commercially available antibiotics exist and are effective. However, they have strong side effects that limit their use in certain human populations, especially immune-suppressed patients.

This new project builds on results that Dou and his research group discovered during the past year. Namely, they altered a digestive organelle in the parasite by disrupting a specific transporter, which stripped the parasite of its ability to process certain proteins. This alteration, in turn, lessened the parasite’s infective strength.

“Our recent work revealed that a Toxoplasma chloroquine resistance transporter ortholog (TgCRT) mediates the separation of the parasite’s digestive compartment with its adjacent organelle, which affects the function of the digestive organelle,” said Dou, who is a researcher with the Eukaryotic Pathogens Innovation Center in the College of Science at Clemson University. “With this NIH R01 grant, we will study the molecular mechanism by which the TgCRT and another digestive organelle-localizing transporter (TgMDR, a Toxoplasma multi-drug resistance transporter ortholog) functionally interact with each other to regulate the function of the digestive compartment in Toxoplasma parasites.”

At the end of the five-year grant, Dou’s team will have quantified the physiological environment within the parasite’s digestive organelle, measured the transport of small nutrient solutes via both TgCRT and TgMDR transporters, and determined the functional relationship between both transporters in the regulation of the morphology and physiology of the digestive compartment.

Dou’s research results might also have an important impact on the treatment of malaria, a mosquito-borne disease that killed more than 400,000 people worldwide in 2017. Malaria is caused by the Plasmodium parasite, which is closely related to the Toxoplasma pathogen.

In some parts of the world, the malaria parasite is resistant to the conventional chloroquine drug treatment because the parasite has mutated its chloroquine resistance reporter protein, making the medicine ineffective.

According to Dou, the malaria parasite contains an organelle called the food vacuole, which displays similar functions as the organelle investigated in Dou’s previous research.

“It has a very acidic environment for food digestion and nutrient utilization, like the human stomach,” he explained. “If we can find a way of neutralizing it, this organelle cannot digest food efficiently, which will cause the death of parasites.”

Clemson University will receive nearly $1.5 million of the total $1.85 million in funding, while Georgetown will receive the rest.

AI can detect low-glucose levels via ECG without fingerprick test