Results demonstrate the power of nickel isotope analyses, which are relatively new, to solve long-standing problems in the geosciences 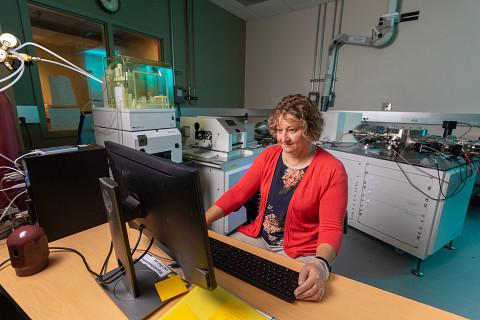 The most severe mass extinction event in the past 540 million years eliminated more than 90 percent of Earth’s marine species and 75 percent of terrestrial species. Although scientists had previously hypothesized that the end-Permian mass extinction, which took place 251 million years ago, was triggered by voluminous volcanic eruptions in a region of what is now Siberia, they were not able to explain the mechanism by which the eruptions resulted in the extinction of so many different species, both in the oceans and on land.

Associate professor Laura Wasylenki of Northern Arizona University’s School of Earth and Sustainability and Department of Chemistry and Biochemistry is co-author on a new paper in Nature Communications entitled, “Nickel isotopes link Siberian Traps aerosol particles to the end-Permian mass extinction,” in collaboration with Chinese, Canadian and Swiss scientists. The paper presents the results of nickel isotope analyses performed in Wasylenki’s lab on Late Permian sedimentary rocks collected in Arctic Canada. The samples have the lightest nickel isotope ratios ever measured in sedimentary rocks, and the only plausible explanation is that the nickel was sourced from the volcanic terrain, very likely carried by aerosol particles and deposited in the ocean, where it dramatically changed the chemistry of seawater and severely disrupted the marine ecosystem.

“The study results provide strong evidence that nickel-rich particles were aerosolized and dispersed widely, both through the atmosphere and into the ocean,” Wasylenki said. “Nickel is an essential trace metal for many organisms, but an increase in nickel abundance would have driven an unusual surge in productivity of methanogens, microorganisms that produce methane gas. Increased methane would have been tremendously harmful to all oxygen-dependent life.”

“Our data provide a direct link between global dispersion of Ni-rich aerosols, ocean chemistry changes and the mass extinction event,” Wasylenki said. “The data also demonstrate that environmental degradation likely began well before the extinction event – perhaps starting as early as 300,000 years before then. Prior to this study, the connection between Siberian Traps flood basalt volcanism, marine anoxia and mass extinction was rather vague, but now we have evidence of a specific kill mechanism. This finding demonstrates the power of nickel isotope analyses, which are relatively new, to solve long-standing problems in the geosciences.”

Wasylenki, who joined NAU in 2018, was formerly an igneous petrologist and then a specialist in calcite crystal growth and biomineralization. She now focuses on the use of metal stable isotope geochemistry to address geological, environmental and biological questions. Many of her recent and current projects have investigated metal isotope effects at solid-fluid interfaces, in particular during metal adsorption to oxyhydroxide mineral particles. This work has implications for ancient and modern geochemical cycles and environmental metal transport. Wasylenki’s lab group, named Systematic Experimental Study and Analysis of Metals in the Environment (SESAME Lab), focuses on two main research themes, the cycling of transition metals in modern and ancient oceans and the environmental transport of toxic heavy metals.