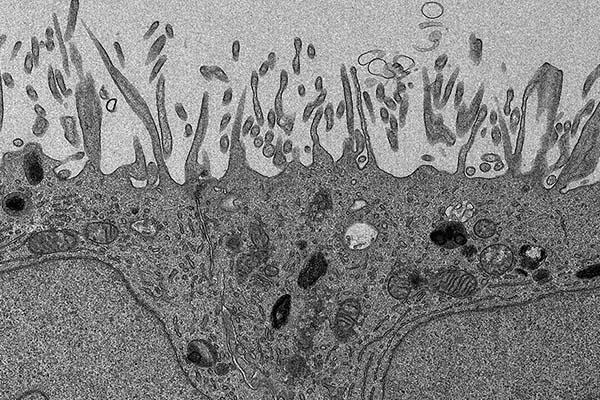 LA JOLLA, CA–An analysis of thousands of genomes from people with and without the rare eye disease known as MacTel has turned up more than a dozen gene variants that are likely causing the condition to develop and worsen for a significant share of patients.

The discovery, by a team of scientists from Scripps Research and the Lowy Medical Research Institute, in collaboration with Columbia University in New York and UC San Diego, provides a new avenue to pursue for diagnosis and treatment. It also sheds light on fundamental aspects of metabolism in the retina, a tissue with one of the highest energy demands in the human body. Findings appear today in the journal Nature Metabolism.

“It’s exciting to uncover new answers to the many questions surrounding this rare and complex eye disease,” says Martin Friedlander, MD, PhD, professor at Scripps Research and president of the Lowy Medical Research Institute in La Jolla. “Although we’ve known that MacTel has a genetic component, the precise variants had remained elusive. These findings will serve as a springboard for further scientific investigation and as a guide to potential therapeutic targets.”

MacTel, short for “macular telangiectasia type 2,” is a progressive and debilitating eye disease that occurs in roughly one out of 5,000 people, or about 2 million people worldwide. A disease of the retina, the light-sensing tissue at the back of the eye, MacTel causes a gradual deterioration of central vision, interfering with critical tasks such as reading and driving.

Piecing together the puzzle

For more than 15 years, scientists have collaborated in an international effort, the MacTel Project, to find the cause of MacTel and develop treatments. Earlier studies found patients had low levels of an amino acid called serine in their bloodstream. However, while serine is essential for many biological processes, it was not known at that time to affect eye health.

In 2019, Friedlander and colleagues found the connection. They made a breakthrough discovery that low serine levels were responsible for a buildup of toxic lipids, which cause photoreceptor cells to die. But still, many questions remained. For example, what caused the decline in serine? The investigation continued.

In the new study, Rando Allikmets, PhD, of Columbia University, used an alternative approach to find genetic drivers of disease. Instead of assessing individual mutations in genes, he and his team analyzed groups of mutations, giving them a greater ability to identify disease-causing genes in a small population of people with MacTel.

One gene, PHGDH, had significantly more variants in MacTel patients than those without the disease. The team identified 22 rare variants in PHGDH which, together, account for approximately 3 to 4 percent of MacTel cases. Many more variants likely exist but haven’t been found yet–a challenge considering the small patient population with diverse genetic causes.

Implications for other diseases

PHGDH is a key enzyme that enables the body to make serine, and these studies provided the long-sought link to low serine observed in MacTel patients. Its function is essential for the health of neurons in the eye and elsewhere in the body.

Several of the gene variants identified in the study are known to cause rare, severe neuropathies when both of the alleles, or copies of the gene, are affected. In the case of MacTel, only a single allele is affected, resulting in a partial loss of the enzyme function, which leads to retinal degeneration.

Many of these variants in PHGDH were identified for the first time and were predicted to cause defects in the gene, and Friedlander’s group worked to confirm this. They directly tested whether each of the multitude of variants identified in MacTel patients are actually harmful to PHGDH function, and found they were.

“The PHGDH gene is essential for the production of serine, which plays a central role in cellular metabolism,” says Kevin Eade, PhD, a former Scripps Research postdoctoral associate who is a senior scientist at the Lowy Medical Research Institute. “Through genetic analyses and experiments in human-derived retinal tissue, we were able confirm that even a partial loss of PHGDH function can have a damaging effect on the retina.”

The scientists then used human induced pluripotent stem cells to generate specialized retinal cells that contained one of the MacTel-associated PHGDH mutations. They found that a PHGDH mutation in these cells leads to the production of a toxic lipid previously shown to cause MacTel.

Vision for a therapy

By more fully understanding the role of PHGDH in MacTel, scientists are hopeful they can begin to map out potential treatment approaches.

“We still have much to learn about this rare disease, including why systemic changes in serine metabolism leads to retinal degeneration,” says Marin Gantner, PhD, senior staff scientist at the Lowy Medical Research Institute and doctoral graduate of Scripps Research. “We have come such a long way in identifying links to the disease, and every step provides new insights that can be leveraged in creating a therapy.”

The work was supported by the Lowy Family, the Lowy Medical Research Institute, the National Institutes of Health and Research to Prevent Blindness to the Department of Ophthalmology at Columbia University.