New gene identified that contributes to progression to type 1 diabetes

AUGUSTA, Ga. (Nov. 16, 2021) – When the pro-inflammatory pair, a receptor called CCR2 and its ligand CCL-2, get together, it increases the risk of developing type 1 diabetes, scientists report. 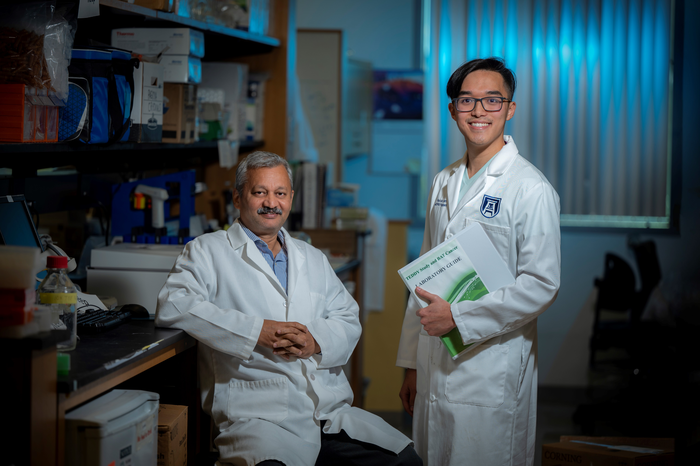 AUGUSTA, Ga. (Nov. 16, 2021) – When the pro-inflammatory pair, a receptor called CCR2 and its ligand CCL-2, get together, it increases the risk of developing type 1 diabetes, scientists report.

In this autoimmune disease that typically surfaces in childhood, the interaction of this natural lock and key recruits immune cells to the pancreas, which attack the insulin-producing islet cells, resulting in a lifelong course of insulin therapy and a lifelong increased risk of other health problems like heart and kidney disease, says Dr. Sharad Purohit, biochemist in the Center for Biotechnology and Genomic Medicine at the Medical College of Georgia.

The study, published in the Journal of Translational Autoimmunity, provides evidence the CCR2 gene promotes progression to type 1 as it provides new insight on how to delay disease progression, says Paul Tran, MD/PhD student at MCG at Augusta University. Tran and Purohit are the study’s first authors.

The scientists were able to put the pieces together by looking at the longitudinal data on 310 people enrolled in DAISY, a National Institutes of Health-funded study based at the University of Colorado Anschutz Medical Campus in Aurora, that has been following individuals considered at risk for type 1 because of having a relative with it or having one of the genes associated with it since 1993.

The new study focused on 42 individuals who persistently had antibodies against the insulin-producing islet cells but never actually developed type 1, 48 who did develop type 1 and the remainder who did neither and served as the control group.

They found that blood levels of CCL-2, the ligand for CCR2, were lower in both individuals who had antibodies but not actual disease as well as those who progressed to type 1 diabetes, Tran says.

They also found that both these groups have more of the receptors on their immune cells, which get recruited by the ligand to the six-inch organ in the abdomen that helps us break down the food we eat.

Numerous human studies have indicated that blood levels of the ligand CCL-2, or chemokine ligand 2, are associated with type 1 diabetes but how was unclear, Tran says. The new study clarifies that direction.

It was also known that the locus, the physical location on a chromosome, in this case the 3p21.31 locus, where CCR2 is located, was associated with type 1 diabetes, although the specific genes within it had not been directly associated with the condition in humans, Purohit says.

They also found that two small genetic variants, or SNPs, in that locus are what cause higher expression of CCR2 which causes the lower blood levels of its ligand, Purohit says.

More receptors means increased signaling between CCR2 and CCL-2, which results in increased recruitment of immune cells, which are laden with CCL-2 receptors, to the pancreas, although their work to date has not clearly explained why, Tran says.

The increased signaling also depletes the CCL-2 supply, as immune cells gobble it up along with the islet cells.

A bottom line is a seemingly contradictory scenario emerges of decreased blood levels of a pro-inflammatory molecule in the face of an increased inflammatory state, they write. Purohit notes a similar scenario has been described in cardiovascular disease where lower levels of interleukin-6, which is mostly associated with inflammation, are associated with a worse prognosis.

CCR2 has not previously been directly associated with humans with type 1 diabetes, but it was known that when the gene is knocked out in mice prone to developing type 1, they become less prone to disease development, Tran says. Generally speaking it’s also known that individuals with higher expression of the CCR2 gene are more likely to experience the likely unwanted recruitment of immune cells into numerous areas of their body, like what happens in conditions like rheumatoid arthritis and multiple sclerosis. There was also evidence that a protein associated with the gene CCR2 was lower in patients with type 1 diabetes.

But correlation does not equal causation, Tran notes.

The DAISY study is led by Dr. Marian Rewers, pediatric endocrinologist and a study coauthor. Statistician Fran Dong, also a study coauthor from the Colorado group, worked with the other scientists to analyze data and they were able to show that children who will develop type 1 diabetes have a lower level of the ligand CCL-2 in their blood at birth and it stays lower as they get older.

Everyone recruits CCL-2 at some level, as part of the body’s natural defense mechanism against something like a virus, but the problem is when there is too much, Tran says. Levels of CCL-2, for example, do go up when you have an infection of the pancreas.

Unlike type 2 diabetes, type 1 diabetes tends to surface in childhood or adolescence but with similar symptoms like increased thirst and urination, similar consequences like heart, blood vessel and kidney damage, and all these patients will need insulin therapy. Type 1 is considered a collision of the child having high-risk genes and environmental triggers, and ongoing studies like those at MCG are working to uncover more of those genes and triggers.

Scientists, including Purohit, reported in 2015 in the Journal of Clinical Endocrinology & Metabolism that patients with type 1 diabetes have significantly lower blood levels of four proteins that help protect tissue from attack by the immune system, including CCL-2, also called MCP-1, while their healthy relatives, some of whom also had some of the high-risk genes for type 1, had normal levels.

Genome Wide Association Studies, or GWAS, which associate genetic variations with particular diseases, have associated the 3p21.31 locus with type 1 diabetes and other autoimmune disease in children, but exactly what variants are responsible has been unknown, they write. The locus is  known to have a lot of chemokine receptors, which are largely associated with promoting inflammation, like CCR2.

The research was supported by the National Institutes of Health and the Juvenile Diabetes Research Foundation.

Dr. Jin-Xiong She, former director of the MCG Center for Biotechnology and Genomic Medicine and founder and CEO of Jinfiniti Precision Medicine, is the study’s corresponding author.

The 3p21.31 genetic locus promotes progression to type 1 diabetes through the CCR2/CCL2 pathway