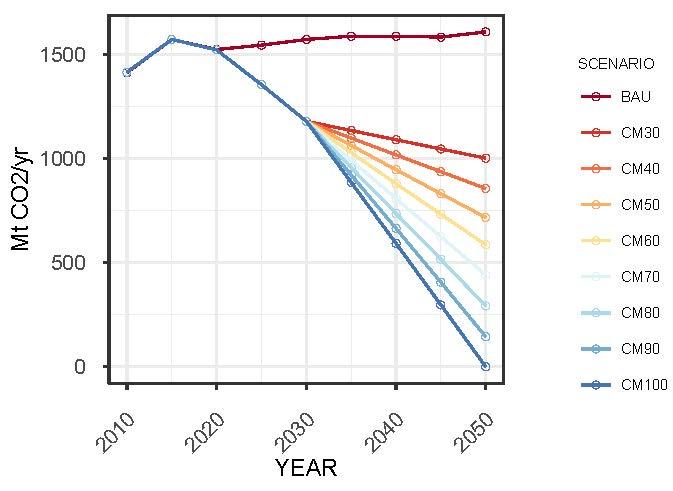 With the COP Climate conference in Glasgow only a few months away, the ambitions of the Paris Agreement and the importance of taking action at the national level to reach global climate goals is returning to the spotlight. IIASA researchers and colleagues have proposed a novel systematic and independent scenario framework that could help policymakers assess and compare climate policies and long-term strategies across countries to support coordinated global climate action.

The Paris Agreement defines a long-term temperature goal for international climate policy: “holding the increase in the global average temperature to well below 2°C above pre-industrial levels and pursuing efforts to limit the temperature increase to 1.5°C”. Its achievement critically depends on actions and policymaking at the regional, national, and subnational level. As part of the Agreement, countries are required to submit Nationally Determined Contributions (NDCs) and long-term strategies outlining their greenhouse gas emissions reduction efforts at the national scale towards 2030 and 2050 respectively. Currently, national scenarios underpinning long-term strategies are however poorly coordinated and difficult to compare across countries, thus preventing the assessment of individual nations’ climate policies.

In a new perspective published in the journal Nature Climate Change, IIASA guest researcher and associate professor of environmental engineering at Kyoto University, Shinichiro Fujimori and colleagues endeavored to address this problem by presenting a systematic and standardized, yet flexible, scenario framework. Starting with projected emission levels of the NDCs for 2030, the framework varies 2050 emissions to explore alternative long-term targets for 2050. Applying the framework to six major Asian countries (China, India, Japan, Korea, Thailand, and Vietnam), for instance, successfully revealed individual challenges in energy system transformation and investment needs in comparable scenarios. According to the researchers, this framework could be a starting point for comprehensive and independent assessments as input to the global stock take over the coming years.

“In the Paris Agreement, there are several mechanisms to ensure that national actions align with global goals. First, parties are required to regularly report on their progress towards implementing their NDCs. While the climate research community has contributed to creating long-term national scenarios, until now, coordination of scenario studies among countries has been limited,” Fujimori explains. “Moreover, the revision of national policies are now taking place more frequently than before, which implies that there is a need to develop a comprehensive, comparative, and robust scenario framework to accommodate potential changes in political and societal situations in the future. Given this situation, our proposed national scenario framework is intended to cope with such uncertainty.”

The proposed framework comprises a systematic and standardized approach for national scenarios that appropriately covers plausible future ranges of mitigation pathways and enables comparison across countries. The researchers have termed their framework “national long-term pathways” – or NLPs for short – which could resemble Representative Concentration Pathways (RCPs) in formulating the ambition and range of climate targets. This approach allows hedging against future national target uncertainties by not specifying a single emissions reduction target, but instead exploring multiple systematic scenarios associated with percentages of emissions reductions in 2050 as a default set.

The framework uses two kinds of scenarios, the first of which is the baseline, which excludes ambitious climate change mitigation policies but includes currently implemented and planned policies. The second kind of scenario is climate scenarios that target between 10% and 100% emissions reductions in 2050 compared with base year emissions, with 10%-point intervals covering the space between them. This can also be translated into intensity targets, such as carbon intensity of gross domestic product (GDP) assumptions.

In addition, the study notes that NDC targets for 2030 can be adopted, but that these may have variations associated with conditional/unconditional/updated targets. Considering the current political situation in which many countries are announcing carbon neutrality targets for target dates other than 2050, the researchers point out that their proposed emissions pathway design can also be applied beyond 2050 and assessed from the timing of net-zero emissions perspective and the required transition towards that goal.

“In the context of a dynamic climate policy environment accompanied by rapid technological and societal development, reevaluating national emissions targets on a regular basis has become ever more important,” says IIASA Integrated Assessment and Climate Change Research Group Leader, Volker Krey, a coauthor of the study. “We hope that transparent and independent science-based analysis will help inform the policy debate on setting national targets.”

The team is confident that their proposed scenario framework will be useful to policymakers and that it will also contribute to building a research community that explore and update national scenarios more frequently than in the past in order to stimulate and inform the political discussions on ambitious national climate targets across a range of countries.

The International Institute for Applied Systems Analysis (IIASA) is an international scientific institute that conducts research into the critical issues of global environmental, economic, technological, and social change that we face in the twenty-first century. Our findings provide valuable options to policymakers to shape the future of our changing world. IIASA is independent and funded by prestigious research funding agencies in Africa, the Americas, Asia, and Europe. http://www.iiasa.ac.at