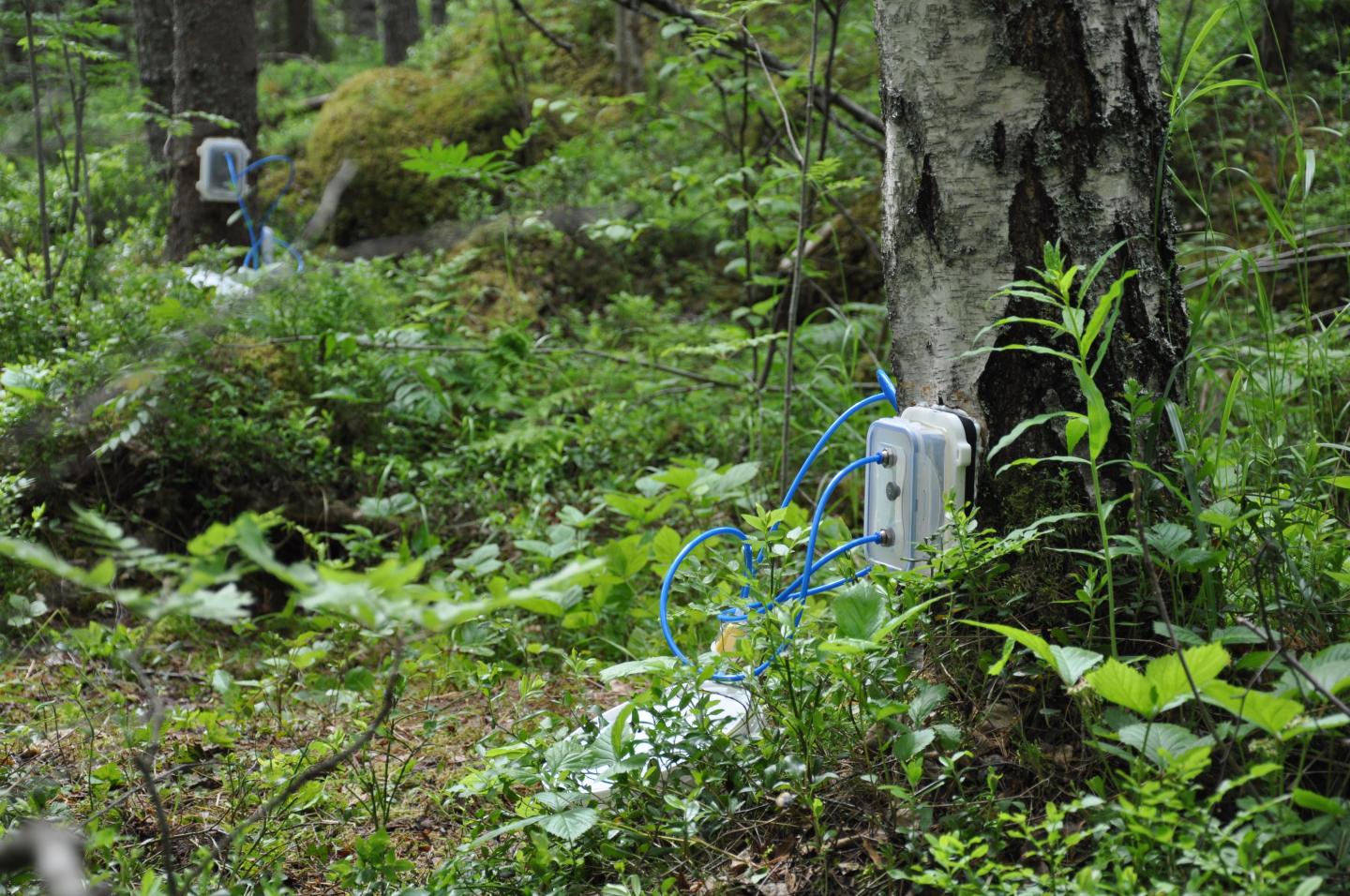 A recently published study, completed by researchers from the University of Helsinki together with Dr Katerina Machacova, a visiting scholar, demonstrates that boreal forests of the Northern Hemisphere are sources of the greenhouse gas nitrous oxide (N2O). The study provides new information on the significance of trees as sinks and sources of greenhouse gases, proving that forests have relevance not only in the absorption of carbon, but also as a source of other greenhouse gases.

The research group observed that the greenhouse gas nitrous oxide is released into the atmosphere not only by the forest soil, but also by pine, birch and spruce, the trees of the northern boreal zone. The group has previously demonstrated (Machacova et al., 2016; Scientific Reports) that the stems and canopies of pine trees in the northern boreal zone are sources of N2O. This recent study indicated that also birches and spruces release the gas into the atmosphere.

“Trees may have an impact more significant than previously thought on the nitrous oxide balance of forests, as well as on the global N2O balance,” says Associate Professor Mari Pihlatie from the Faculty of Agriculture and Forestry, University of Helsinki.

The most important discovery in the study was that the N2O emissions of tree stems clearly vary by season, corresponding with the physiological activity of the trees. During the growing season, trees release nitrous oxide from their stems, while during dormancy in the winter, they can become consumers of the gas. Even though the consumption of N2O over the winter reduces annual emissions, trees remain annual N2O sources. Seasonal variation in N2O emissions corresponded with the carbon dioxide emissions of tree stems. Both types of emissions peaked in the summer.

“Trees acting as a source of nitrous oxide emissions is a new finding in the forest environment. Generally, trees have not been assumed to have a role in the N2O balance of forests, which is why no relevant measurements of trees have been made. To a certain degree, trees have been omitted from measurements due to challenges in constructing suitable measurement chambers that would fit around stems or that could be utilised in measuring canopies, an even more difficult task,” says Elisa Vainio, a postdoctoral researcher at the Faculty of Agriculture and Forestry, University of Helsinki.

According to prevailing scientific knowledge, the primary emission source for greenhouse gases is fertilised and nitrogen-rich farmland. Already in 1998 it was originally suggested that trees may transport to the atmosphere nitrogen oxide produced by microbes in the soil. Subsequently, the phenomenon was verified in laboratory experiments (Pihlatie et al., 2005). However, the number of studies completed on the topic after that can be counted on one hand.

In the recently published study, comprehensive measurements of environmental factors in the atmosphere, soil and trees were combined with nitrous oxide emissions for the first time. The SMEAR II / ICOS research station at the Hyytiälä Forestry Field Station is a unique measurement location known for its comprehensive and continuous measurement of forest functions. By combining N2O emissions measured from trees and the soil with the measurements made on the ecosystem level at the station, it was observed that the N2O dynamics of trees correspond with their physiological activity.

Furthermore, the researchers demonstrated that even in boreal forests with low nitrogen levels where the amount of nitrogen restricts tree growth, part of the nitrogen in the ecosystem is released into the atmosphere as nitrous oxide. In the earlier studies carried out by the group, it was found that the N2O emissions of the forest being measured only constituted a fraction of the nitrogen consumption and internal nitrogen cycle of the forest (Korhonen et al., 2013). In other words, the forest is efficient in recycling by breaking up organic matter found in the soil and releasing nitrogen in a form useable by plants, which trees then use for growing. Eventually, the nitrogen is returned to the soil in the form of needle and leaf litter. A small portion of the recycled nitrogen ends up in the atmosphere as nitrous oxide, either directly from the soil or transported from the soil by trees. The researchers suggest that most of the N2O released by tree stems is produced by microbes in the soil and transported via the transpiration stream of trees from roots to stems, from where it is released into the atmosphere.

According to the researchers, N2O emissions from spruces may be of special importance in Central Europe, where spruces are widely grown in monoculture. As there are no other studies published on the seasonal variation of the N2O exchange of trees, there is a great global demand for further research.

Magnets for the second dimension

Cannabis found not to be a substitute for opioids