New finding on origin of avian predentary in Mesozoic birds 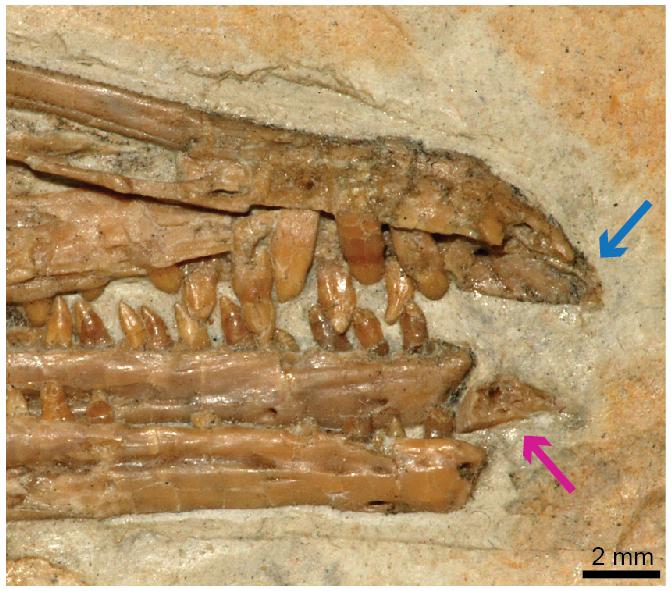 The predentary bone is one of the most enigmatic skeletal elements in avian evolution. Located at the tip of the lower jaw, this bone is absent in more primitive birds and in living birds; it is thought to have been lost during evolution. For over 30 years, the origin and function of the avian predentary has remained mysterious.

Now, however, Alida Bailleul, LI Zhiheng, Jingmai O’Connor and ZHOU Zhonghe from the Institute of Vertebrate Paleontology and Paleoanthropology (IVPP) of the Chinese Academy of Sciences have made significant progress towards solving this long-standing mystery. Their findings were published in Proceedings of the National Academy of Sciences of the United States of America (PNAS) on November 18.

Cranial kinesis occurs when joints are able to move within the skull – mainly between the upper jaw and the braincase. This feature is widespread in living birds; however, it is thought to be mostly absent in Mesozoic birds.

The tiny beak at the tip of the skull, combined with the sensitive and mobile predentary bone and teeth that were most likely also proprioceptive, represents a unique feeding adaptation that allowed greater dexterity when manipulating food. Although bizarre and now extinct, this unique feeding apparatus persisted in the ornithuromorph clade for at least 58 million years, from the Early to the Late Cretaceous.

Using information from the fossilized tissues and preexisting data on the embryology of living birds, the team also formulated a hypothesis regarding the origin of this bone, suggesting it is a sesamoid, similar to the human knee cap. Identification as a sesamoid means this bone is a novel skeletal innovation unique to one lineage of ornithuromorphs, and that it did not arise from a preexisting skull bone.

Although additional research on fossils birds (and also extant birds) is required to confirm some of these hypotheses, the predentary is such a small bone that it is only rarely preserved, thus making it very difficult – if not impossible – to find specimens that can shed light on the remaining pieces of this mystery.

Study measures impact of agriculture on diet of wild mammals

Data flows from NASA’s TESS Mission, leads to discovery of…

Is glue the answer to climate change?