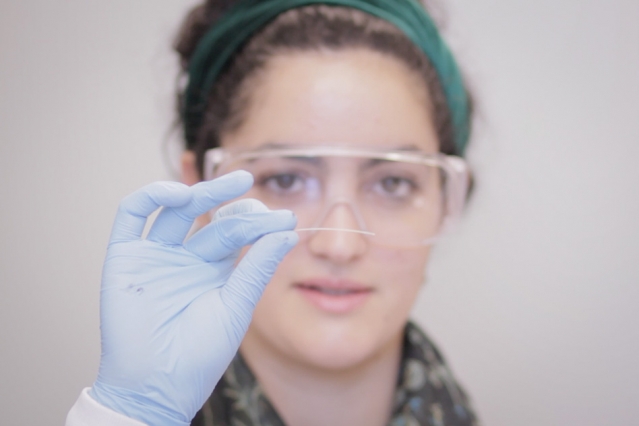 Christina Tringides, a senior at MIT and member of the research team, holds a sample of the multifunction fiber produced using the group’s new methodology.

The human brain’s complexity makes it extremely challenging to study — not only because of its sheer size, but also because of the variety of signaling methods it uses simultaneously. Conventional neural probes are designed to record a single type of signaling, limiting the information that can be derived from the brain at any point in time. Now researchers at MIT may have found a way to change that.

By producing complex multimodal fibers that could be less than the width of a hair, they have created a system that could deliver optical signals and drugs directly into the brain, along with simultaneous electrical readout to continuously monitor the effects of the various inputs. The new technology is described in a paper appearing in the journal Nature Biotechnology, written by MIT’s Polina Anikeeva and 10 others. An earlier paper by the team described the use of similar technology for use in spinal cord research.

In addition to transmitting different kinds of signals, the new fibers are made of polymers that closely resemble the characteristics of neural tissues, Anikeeva says, allowing them to stay in the body much longer without harming the delicate tissues around them.

“We’re building neural interfaces that will interact with tissues in a more organic way than devices that have been used previously,” says Anikeeva, an assistant professor of materials science and engineering. To do that, her team made use of novel fiber-fabrication technology pioneered by MIT professor of materials science (and paper co-author) Yoel Fink and his team, for use in photonics and other applications.

The result, Anikeeva explains, is the fabrication of polymer fibers “that are soft and flexible and look more like natural nerves.” Devices currently used for neural recording and stimulation, she says, are made of metals, semiconductors, and glass, and can damage nearby tissues during ordinary movement.

“It’s a big problem in neural prosthetics,” Anikeeva says. “They are so stiff, so sharp — when you take a step and the brain moves with respect to the device, you end up scrambling the tissue.”

The key to the technology is making a larger-scale version, called a preform, of the desired arrangement of channels within the fiber: optical waveguides to carry light, hollow tubes to carry drugs, and conductive electrodes to carry electrical signals. These polymer templates, which can have dimensions on the scale of inches, are then heated until they become soft, and drawn into a thin fiber, while retaining the exact arrangement of features within them.

A single draw of the fiber reduces the cross-section of the material 200-fold, and the process can be repeated, making the fibers thinner each time and approaching nanometer scale. During this process, Anikeeva says, “Features that used to be inches across are now microns.”

Combining the different channels in a single fiber, she adds, could enable precision mapping of neural activity, and ultimately treatment of neurological disorders, that would not be possible with single-function neural probes. For example, light could be transmitted through the optical channels to enable optogenetic neural stimulation, the effects of which could then be monitored with embedded electrodes. At the same time, one or more drugs could be injected into the brain through the hollow channels, while electrical signals in the neurons are recorded to determine, in real time, exactly what effect the drugs are having.

MIT researchers discuss their novel implantable device that can deliver optical signals and drugs to the brain, without harming the brain tissue.

The system can be tailored for a specific research or therapeutic application by creating the exact combination of channels needed for that task. “You can have a really broad palette of devices,” Anikeeva says.

While a single preform a few inches long can produce hundreds of feet of fiber, the materials must be carefully selected so they all soften at the same temperature. The fibers could ultimately be used for precision mapping of the responses of different regions of the brain or spinal cord, Anikeeva says, and ultimately may also lead to long-lasting devices for treatment of conditions such as Parkinson’s disease.

John Rogers, a professor of materials science and engineering and of chemistry at the University of Illinois at Urbana-Champaign who was not involved in this research, says, “These authors describe a fascinating, diverse collection of multifunctional fibers, tailored for insertion into the brain where they can stimulate and record neural behaviors through electrical, optical, and fluidic means. The results significantly expand the toolkit of techniques that will be essential to our development of a basic understanding of brain function.”

In addition to Anikeeva and Fink, the work was carried out by Andres Canales, Xiaoting Jia, Ulrich Froriep, Ryan Koppes, Christina Tringides, Jennifer Selvidge, Chi Lu, Chong Hou, and Lei Wei, all of MIT. The work was supported by the National Science Foundation, the Center for Materials Science and Engineering, the Center for Sensorimotor Neural Engineering, the McGovern Institute for Brain Research, the U.S. Army Research Office through the Institute for Soldier Nanotechnologies, and the Simons Foundation.