An international research team led by Dr. ZHANG Huaqiao from the Nanjing Institute of Geology and Palaeontology of the Chinese Academy of Sciences (NIGPAS) has used hundreds of new fossil specimens to clarify the anatomy and evolutionary affinity of Saccorhytus, originally thought to be a deuterostome. 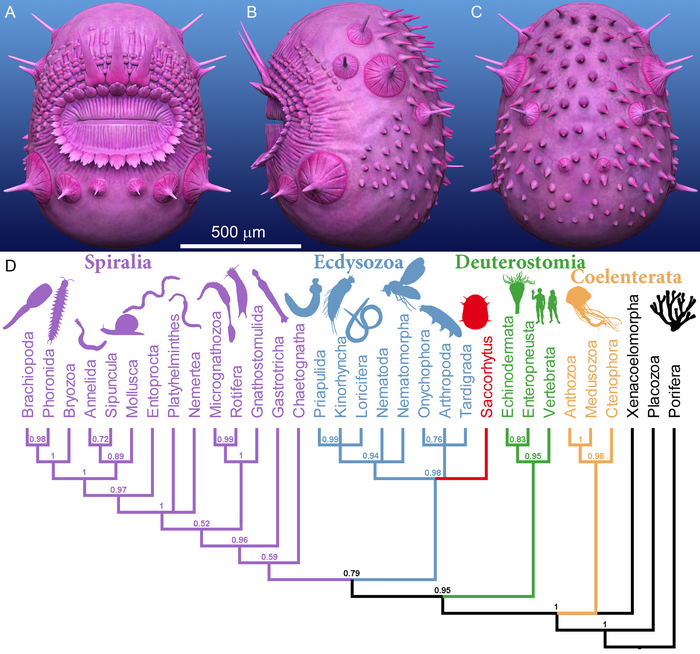 An international research team led by Dr. ZHANG Huaqiao from the Nanjing Institute of Geology and Palaeontology of the Chinese Academy of Sciences (NIGPAS) has used hundreds of new fossil specimens to clarify the anatomy and evolutionary affinity of Saccorhytus, originally thought to be a deuterostome.

The study was published in Nature on Aug. 17.

Dr. LIU Yunhuan from Chang’an University, Dr. XIAO Shuhai from Virginia Tech, Dr. Philip C. J. Donoghue and Miss Emily Carlisle from the University of Bristol, and Dr. Michael Steiner from Shandong University of Science and Technology were also involved in the study.

Saccorhytus, which was originally described in 2017, was discovered from the Cambrian Fortunian Zhangjiagou section of southern Shaanxi Province, China. It was interpreted to be an ancestral deuterostome. It is microscopic in size—about a millimetre in diameter—and resembles a spiky, wrinkly sack. Its mouth is surrounded by radial folds, nodes, and holes that were originally interpreted as pharyngeal openings—a primitive feature of deuterostomes.

However, the evidence supporting Saccorhytus being a deuterostome was always very weak. Were those holes around the mouth really pharyngeal openings?

To address this question, the research team collected hundreds of new Saccorhytus specimens from the Cambrian Fortunian Zhangjiagou and Shizhonggou sections of southern Shaanxi Province. Many of the specimens were much better preserved than any seen before, thus providing new information about the anatomy and evolutionary affinity of Saccorhytus.

Based on these discoveries, the anatomy of Saccorhytus is now clear. Saccorhytus has a millimetric, ellipsoidal body, with one half slightly wider than the other half. Its integument is two-layered and non-ciliated. The mouth is situated terminally, and is surrounded by radial folds, one circlet of circumoral protuberances, and one to five large protuberances on one side of the body; all protuberances have a central main spine flanked by two lateral spines with a closed tip.

Four to eight pairs of body cones are bilaterally arranged around the oral-aboral axis, each with an expanded conical base that is ornamented with longitudinal folds and supports an apical spine with a closed tip. Many nodes occur on the same side of the body as the large protuberances. In addition, many small, sharp-tipped spines are positioned on the aboral side of the body. No internal biological structures are preserved and the anus is absent.

The team interpreted the integument as cuticle rather than epidermis. This is because cuticle contains multiple sub-layers (i.e., epicuticle, exocuticle, and endocuticle), whereas epidermis contains a single, very thin layer of epithelial cells. Furthermore, cuticle is decay-resistant and has relatively high fossilization potential, whereas epidermis is soft and decays quickly after death.

This interpretation is consistent with the abundance of Saccorhytus specimens in the studied rocks, indicating that they have relatively high preservation potential. It is also consistent with experimental taphonomy on ecdysozoans, which shows that ecdysozoan epidermis, muscles, and visceral organs decay very quickly after death, leaving only cuticular structures and intestines.

The researchers found that the circumoral/large protuberances, body cones, and small spines are all spinose structures with closed, sharp tips. Since the body cones have no openings, they cannot be interpreted as possible pharyngeal openings. The integument represents cuticle, with no trace of cilia, implying that the underlying epidermis is non-ciliated. The mouth has now been reinterpreted as terminal rather than ventral.

Saccorhytus is different from any known bilaterians in general morphology and body plan, but the research team have been able to find four key characteristics that help address the affinity of Saccorhytus, including a terminal mouth, the presence of cuticle, non-ciliated epidermis, and the presence of radially arranged circumoral structures. This suite of characteristics generally occurs in ecdysozoans. In particular, radially arranged circumoral structures are common to Cambrian and extant ecdysozoans. In other words, evidence pointed to Saccorhytus being an ecdysozoan.

In order to test the ecdysozoan hypothesis, the research team conducted a comprehensive morphology-based phylogenetic analysis along with several experiments to test different possibilities. In all tests, results supported the hypothesis that Saccorhytus belongs to the total-group Ecdysozoa; conversely, the deuterostome and cnidarian hypotheses were not supported.

All in all, the origin of the ecdysozoan body plan awaits further study of the interrelationships among the earliest known ecdysozoans in the Cambrian Fortunian Age.

Saccorhytus is an early ecdysozoan and not the earliest deuterostome