New evidence for how a rare form of liver cancer arises 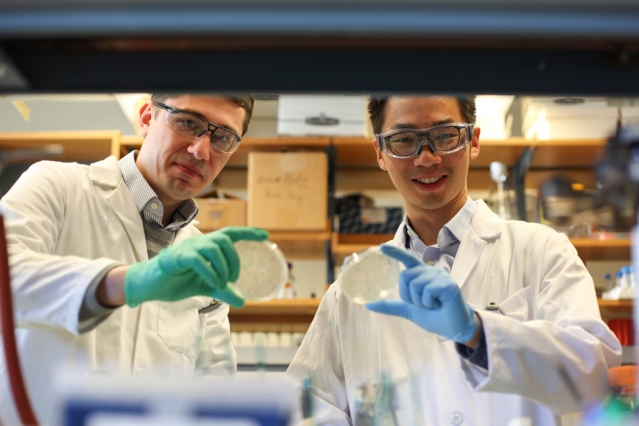 In the 1970s, epidemiologists found that workers in factories using vinyl chloride, the key ingredient for PVC plastics, had unusually high rates of a rare form of liver cancer called angiosarcoma.

Biologists later identified a mutation that appears to be associated with this cancer, which originates in cells of the blood vessels that feed the liver. Now, using new sequencing technology that enables large-scale analysis of DNA damage-associated mutations, MIT researchers have pinpointed the specific type of DNA damage that may be responsible for this mutation.

With this knowledge, scientists could develop tests to monitor workers who might be exposed to vinyl chloride, because it has been previously shown that this type of DNA damage can be detected as a biomarker in urine samples. This could alert factories that they need to improve their safety practices if their workers are being exposed to too much vinyl chloride.

The research also lays the groundwork for applying this technology to identify other types of DNA damage, also called DNA lesions or adducts, that may be responsible for certain types of cancers. The initiation of many cancers may arise from the mutations generated by DNA lesions that are produced by natural processes such as inflammation, or by exposure to environmental agents such as vinyl chloride. These processes generate a variety of DNA lesions, making the identification of the most significant lesion a challenging task.

“I can think of a dozen different lesions this technology could be applied to,” says John Essigmann, the William R. and Betsy P. Leitch Professor of chemistry and a professor of toxicology and biological engineering. “Unfortunately there are a lot of things in the environment that are potentially associated with disease, and many of them do so by damaging nucleic acids.”

Essigmann, director of MIT’s Center for Environmental Health Sciences, is the senior author of this study, which was published in the April 1 issue of the journal Nucleic Acids Research. The paper’s lead author is Shiou-chi (Steven) Chang, a graduate student in biological engineering.

Vinyl chloride is believed to cause many different types of DNA damage, but until now scientists had been unsure which of those lesions were most likely to produce cancers such as hepatic angiosarcoma. These lesions are formed when metabolic byproducts of vinyl chloride react chemically with the bases that encode the genetic information in DNA.

About 10 years ago, Essigmann’s lab published a paper analyzing the mutagenic potential of ethenoadenine and ethenocytosine. For that study, they had to introduce the lesions into cells one by one and analyze each sample individually, which is a very time-consuming process.

In the past few years, the MIT team, led by Chang, adopted and improved a previously described next-generation sequencing approach, which allows for simultaneous analysis of many DNA strands. With the new system, “just by doing one sequencing reaction, you can get all of the data that might have taken weeks or months in the past,” Chang says.

Using this system, the researchers have completed the study of all four etheno adducts, using E. coli that vary in their DNA repair and replication abilities.

“With this method, you can study several DNA lesions all at the same time. You’re able to make a side-by-side comparison, which is always better than measuring one thing, and measuring another thing a few months later, and then another one after that,” Essigmann says. “We can do them all at once but get exactly the same high-quality information.”

The researchers found that one of the ethenoguanine lesions, known as N2,3-ethenoguanine, cannot be repaired by an enzyme known as AlkB, unlike the other three etheno adducts. This could explain why this particular DNA damage is the most prevalent etheno lesion and remains in cells for a long time. When the damaged DNA is copied, enzymes responsible for copying DNA may insert the wrong nucleotide opposite the lesion, which causes a guanine to adenine mutation.

Previous work has shown that this type of mutation, when it occurs in a specific stretch of a cancer-promoting gene known as K-ras, is associated with hepatic angiosarcoma.

“This is exciting new data that has redefined the role of etheno DNA adducts in mutagenesis and carcinogenesis,” says Ian Blair, director of the Center for Cancer Pharmacology at the University of Pennsylvania School of Medicine, who was not part of the research team. The findings should stimulate new interest in analyzing urinary concentrations of etheno DNA adducts in human populations, he adds.

From bacteria to humans

Although these studies were done in E. coli cells, all of the enzymes studied, such as AlkB and the enzymes that introduce errors while copying damaged DNA, have human homologs. “Understanding how it works in E. coli, although it’s not human cells, may be a good model for understanding what may happen in humans,” Chang says.

The researchers are now analyzing other types of DNA lesions, including those caused by butadiene, a carcinogenic chemical found in tobacco and gasoline. They are also working on ways to adapt the system to study mammalian cells. Using the CRISPR/Cas9 gene-editing system, the team hopes to test what happens to particular DNA lesions in mammalian cells that differ in their DNA repair enzymes and DNA-copying enzymes.