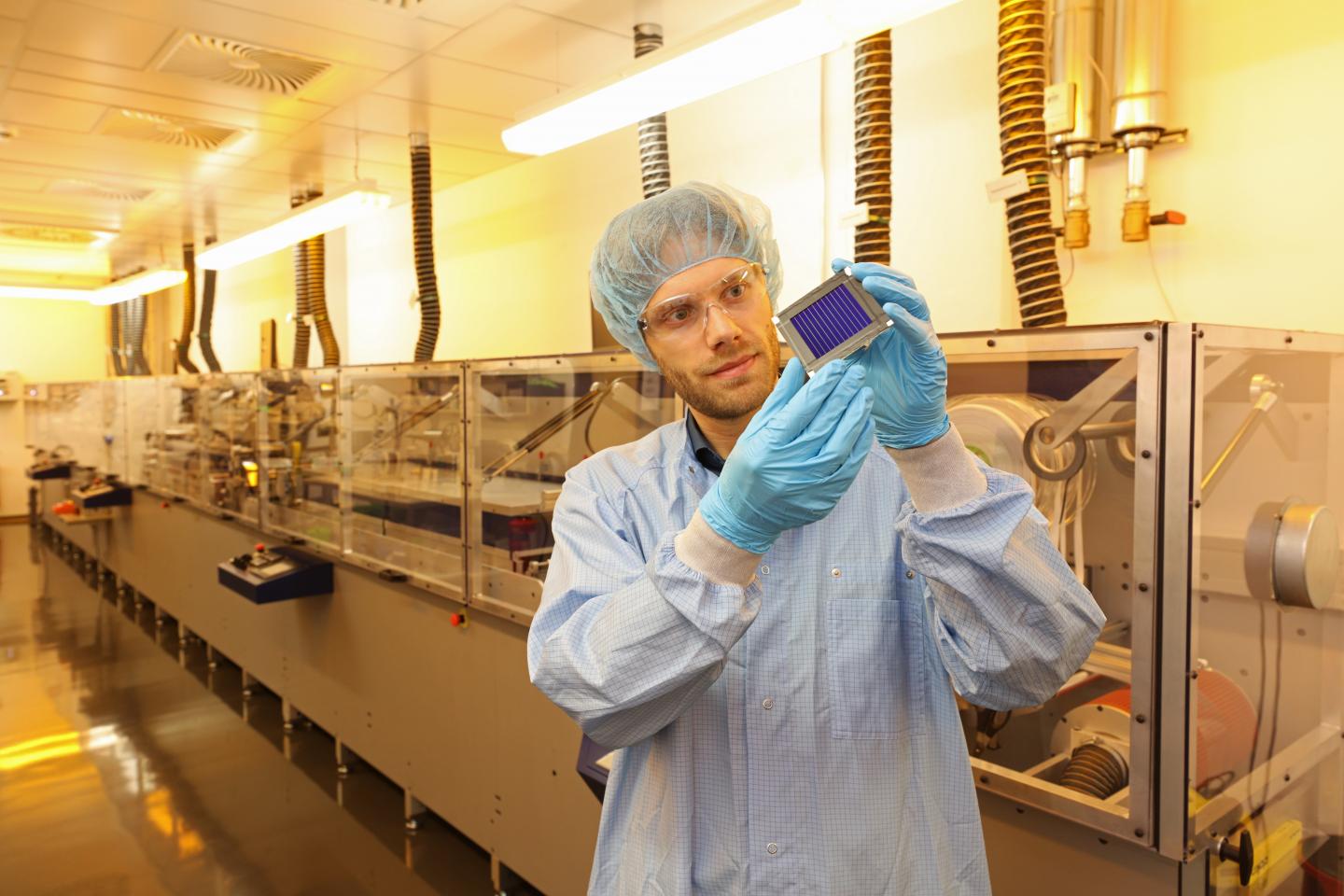 A research team from Nuremberg and Erlangen has set a new record for the power conversion efficiency of organic photovoltaic modules (OPV). The scientists from Friedrich-Alexander Universität Erlangen-Nürnberg (FAU), the Bavarian Center for Applied Energy Research (ZAE), and the Helmholtz Institute Erlangen-Nürnberg for Renewable Energy (HI ERN), a branch of Forschungszentrum Jülich, in cooperation with the South China University of Technology (SCUT), designed an OPV module with an efficiency of 12.6 percent over an area of 26 square centimeters. The former world record of 9.7 percent was exceeded by 30 percent.

This is the highest efficiency value ever reported for an organic photovoltaic module. It was confirmed by a certified calibrated measurement under standard testing conditions by the independent certification laboratory of Fraunhofer ISE (Freiburg) in September 2019. The multi-cell module was developed at the Solar Factory of the Future at the Energie Campus Nürnberg (EnCN) in a coating laboratory with a unique megawatt pilot line for thin-film photovoltaics, which was designed and implemented with financial support by the Bavarian Ministry of Economic Affairs.

“This breakthrough shows that Bavaria is not only a leader in the advancement of photovoltaic installations, but also occupies a leading position in the development of future technologies,” emphasises Hubert Aiwanger, Bavarian State Minister of Economic Affairs, Regional Development and Energy.

Organic solar cells usually consist of two different organic components, possessing the necessary semiconductor properties. In contrast to conventionally used silicon, which is manufactured by energy-intensive melting processes, organic materials can be applied directly from solutions onto a carrier film or glass carrier.

On the one hand, this reduces manufacturing costs, on the other hand, the use of flexible, lightweight materials allows for new applications, such as mobile devices or clothing, even if the efficiency is not yet comparable to that of traditional silicon solar cells.

“This milestone in organic semiconductor research shows that the latest performance developments with certified cell efficiencies of over 16 percent are not limited to the laboratory scale, but ready to be scaled up to the level of prototype modules,” explains Prof. Christoph Brabec from FAU, director at HI ERN, and scientific director of the Solar Factory of the Future, a research group of ZAE Bayern.

Due to their design, the efficiency of complete photovoltaic modules is always slightly lower than that of individual cells. A part of the module area, for example, is always inactive since it is used for the interconnection of the individual cells. With an increasing module area, the losses caused by the electrodes’ electrical resistance increase as well.

The record module consists of twelve serially connected cells and has a geometric fill factor of over 95 percent. This part of the module area actively contributes to the power generation. With respect to its active area, the module even achieves an efficiency of 13.2 percent. The minimisation of inactive areas was achieved through high-resolution laser structuring, as developed and optimised in recent years at the “Solar Factory of the Future”.

Scienmag Jan 22, 2019
Credit: Paolo Tonato Academic literature recognizes innovation as one of the main drivers of a company's stock…

Molecular motors run in unison in a metal-organic framework